HONG KONG -- Patriotic fervor has reached fever pitch in China, thanks to the release of an all-action blockbuster coinciding with celebrations for the 90th anniversary of the People's Liberation Army.

And while "Wolf Warrior II" is no comedy, movie-related stocks have seen market players laughing all the way to the bank.

The high-octane action-adventure stars Wu Jing as Leng Feng, a former special forces operative forced to come to the rescue of a group of Chinese businessmen and locals held by Western mercenaries in an unnamed, war-torn African country.

The action scenes have been described as Ramboesque and Wu has earned the moniker of "Jackie Chan II" with the Chinese media.

According to Amazon's Box Office Mojo website, Wolf Warrior II became the first Chinese movie to rank among the all-time 100 grossing movies worldwide, closing in on Hollywood blockbusters like "The Hunger Games."

The country's state-run Xinhua News Agency runs stories about the movie on an almost daily basis on Xinhuanet. On July 28, it waxed lyrical about the depiction of a Chinese warrior who stops at nothing to save lives, regardless of race or nationality. On Aug. 2, state media went as far as to say people ought to be proud of the strong image it was portraying for the country. 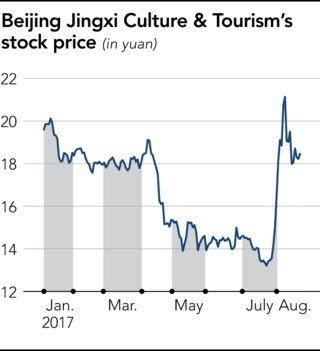 Coinciding with the 90th anniversary of the People's Liberation Army, the movie's release could not have been timed better. The People's Daily, the official mouthpiece of the Communist Party, even commented on a microblogging site that the on-screen heroics had resonated with people's sense of patriotism just as much as the anniversary's commemorative parade.

Where all the bravado is played out is also of huge significance; Africa is an integral part of China's Belt and Road Initiative.

In addition to smashing box-office records, the movie has made its mark on the markets. Beijing Jingxi Culture & Tourism, a production company that invested in the project, saw its stock price skyrocket in Shenzhen as soon as the movie hit theaters -- at one point on Aug. 7, it was up 66% at 22.50 yuan.

The stock price of Beijing Jetsen Technology, a company involved in the production, hit an eight-month high on the same day, while Alibaba Pictures Group, the operator of ticket platform Taobao Movies, jumped 15% in Hong Kong on Aug. 8, hitting levels not seen since March.

One analyst at Chinese brokerage Industrial Securities said the movie appealed on an emotional level amid the ongoing standoff on the Indian border and persistent tensions in the South China Sea.

China's movie market has been struggling of late. Box-office sales had been growing by 20-50% every year through 2015, but slowed to one-digit levels in 2016, according to Entgroup. Box-office grosses only rose 3.5% on the year in the first six months of 2017.

A representative of Chinese brokerage Guotai Junan Securities predicts growth in the market will continue to slow over the next few years due to a shortening pipeline between theaters and online distribution and the generally poor quality of domestic movies.

Market attention will now turn to whether China's answer to the Hollywood blockbuster can reinvigorate the country's movie market -- and perhaps boost a few related stocks.

Growth abroad remains another challenge altogether. Wolf Warrior II has been released in the U.S., the U.K., Australia and several other countries, but 99.6% of the movie's historic box-office sales have come from China, according to Box Office Mojo.