Investors play it safe amid doubts of stimulus-fueled rally

Following the defeat Friday of the Trump-led health care overhaul, the Nikkei Stock Average plumbed depths past 300 points Monday. The benchmark index eventually finished 276 points lower at 18,985, a level below the end of last year.

"The hopes of riding above 20,000 have faded considerably," said a trader at a Japanese brokerage.

Among the only winners in that selloff were components like air conditioner manufacturer Daikin Industries, chipmaking equipment producer Tokyo Electron and helmet maker Shoei. Each boasts double-digit ROE. 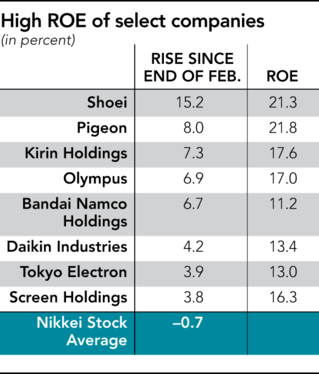 "If the political conditions at home and abroad remain uncertain for the time being, then there is little choice but to select stocks that are unswayed by external factors and have high earning power," said Masamitsu Ohki at Fivestar Asset Management. He added that he pays special attention to high-ROE companies in the construction and food industries.

This trend toward high-ROE stocks has given a lift to an increasing number of companies for the past few weeks. Infant product maker Pigeon has risen 8% since the end of February. Bandai Namco Holdings has jumped 7% while consumer goods maker Kao has gained 6%.

"March has been a month where high ROE has increasingly become the stock-picking theme," said Makoto Furukawa at Mitsubishi UFJ Morgan Stanley Securities.

Although ROE is a key metric for informing stock decisions, its degree of importance depends on the market narrative investors are following at the time. Equities promising better returns were in demand up until 2015, but that changed the following year.

Low interest rates on a global scale and the slump in commodity prices dominated the first half of 2016. Investors at the time stampeded to safe-haven stocks that are largely unaffected by price swings. The latter half was colored by the hype over Trump's stimulus pledges. Investors responded by pouring funds into export-heavy stocks and other equities exposed to the economy.

Back to square one

Now the smart money is coming back to ROE due to the convoluted mindset adopted by investors, said Shingo Ide at NLI Research Institute. The economic situation has improved since the first half of 2016, so there is no impulse to become fully bearish. Yet the Trump card dangling over their heads is curbing bullish attitudes. Within that dilemma, investors "are making choices in pursuit of safety," said Ide.

The picks of that litter are "equities that will likely maintain high ROEs," said Takaaki Yoshino at Daiwa Securities. Companies that make the cut will be those with high net profit margins, not those with ample asset turnover ratios or financial leverage. Those three elements make up return on equity.

So how does one discover these equities? Hidetaka Kawakita, a professor at Kyoto University, says the hint lies in companies that are headquartered in Kyoto, such as Nidec and precision instruments maker Horiba. That city hosts many companies that maintain high margins, keep their finances healthy and generate lofty return on assets, said Kawakita. "Many of them hold unique technologies and business models, and they also convey stability as targets of long-term investment," he added.

However, "there aren't that many companies that can maintain long-term earning power," said a fund manager at an international asset management firm. Concentrating funds on a limited group of components will invite the perception that those stocks are overvalued. That is just the beginning of the issues emerging in what could become a new turning point in the market.