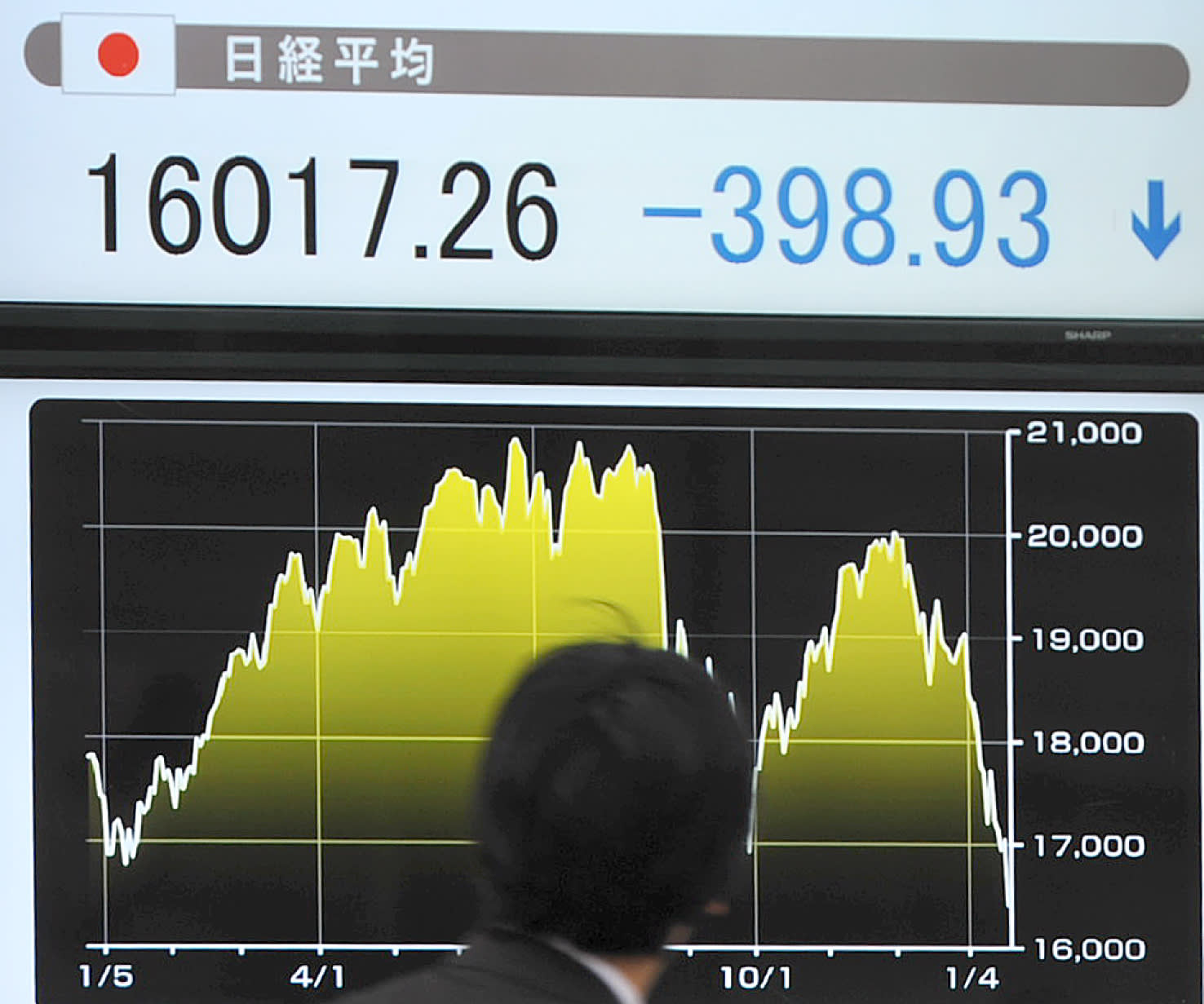 The thrill is gone

With oil prices continuing to plumb new lows, investor concern over the global economy has deepened. Money fleeing stock markets flowed into such safe assets as the yen.

The Bank of Japan's bold monetary easing appears to be losing its magic as well. The Nikkei average has sunk under 16,413 -- its closing value on Oct. 31, 2014, the day that the central bank announced additional easing steps.

Foreign investors are the main sellers. They sold 210.9 billion yen ($1.78 billion) more in Japanese shares last week than they bought, according to data from the Tokyo Stock Exchange.

"Government-linked funds in oil-producing countries sold their holdings to make up for the drop in crude oil prices," said a staffer at a major investment trust company. Foreigners were net sellers for the second consecutive week and are likely continuing to sell actively this week as well.

The yen's stiffening to the mid-116 level against the dollar Thursday fueled worries that Japanese corporate earnings may take a hit, since many listed companies rely on exports.

The Shanghai Composite Index slid to 2,880 on Thursday, its lowest since the start of 2015. Crude oil futures declined to below $27 a barrel in the U.S. market Wednesday.

As the stock market accelerated its slide Thursday afternoon, the Nikkei volatility index topped 40. The gauge of investor anxiety marked its highest since last August, when China's devaluation of the yuan roiled the market.

"Many investors bought put options to prepare for a further slide by stocks," explained Michiro Naito of JPMorgan Securities Japan.

Among the components of the Topix 100 index, which are large-capitalization, actively traded issues, resource companies and exporters have been among the most notable losers on the market this year. While cheap oil prices may force resource companies to take impairment losses, exporters face a headwind from a stiffer yen.

Companies hit by the global stock sell-off have also been pummeled by investors -- underscoring a negative cycle of selling leading to chilling investor sentiment. SoftBank Group has fallen more sharply than any other Topix 100 component, hitting its lowest in 33 months Thursday.

But various indicators are beginning to show that Japanese stocks are oversold. The daily trading value on the first section of the TSE increased 15% on Thursday to 3.08 trillion yen. Yutaka Miura, senior technical analyst at Mizuho Securities, said the market may be nearing a "selling climax," signaling the end of a downtrend phase.

More than 1,000 stocks, including Hitachi, now carry price-to-book ratios below 1, meaning they are valued at less than the companies' liquidation values. Such companies account for nearly half of all stocks on the TSE's first section. Some blue chips have also become oversold, said a portfolio manager at U.S. asset management company GMO.