Bank Rakyat Indonesia has little lending exposure to carbon-intensive sectors and boasts one of the world's highest return on capital in its sector.
CopyCopied

Asia's leading economies were in the grip of the worst financial crisis in decades 20 years ago, with stock markets in the four so-called Tiger economies in freefall. At around the same time, investors elsewhere were taking the first steps to integrate environmental, social and governance factors into investment decisions. It is now time for investors in Asia to bear ESG principles in mind to hedge against risks.

Asia's emerging markets have become a major driver of the global economy while interest in ESG has boomed, with more than $70 trillion of assets now managed in line with the U.N.-supported Principles for Responsible Investment.

Companies from the economic powerhouses of China and India are now the darlings of emerging market investors. But investors should look at these stocks through an ESG lens, analyzing corporate governance and environmental and social management practices, to identify those robust enough to provide long-term growth opportunities.

The STOXX Asia/Pacific ESG Leaders 50 Index, composed of 50 large market cap companies scored highly for their environmental, social and corporate governance performance, returned 95.2% over the five years to Nov. 30 in euro terms on a gross basis, compared with 74.3% for the regular STOXX Asia/Pacific 600 Index. 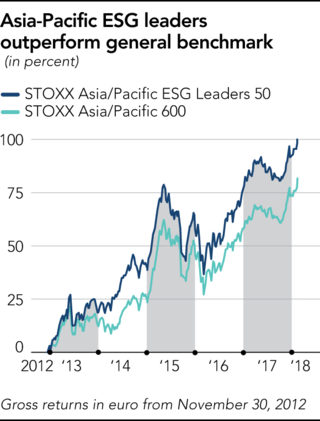 Companies in the ESG Leaders index are evaluated by research and ratings company Sustainalytics against standards created by the European Federation of Financial Analysts Societies and the Society of Investment Professionals in Germany. The benchmark, which is reviewed annually, excludes those that make or sell controversial weapons or that fall afoul of the U.N.'s Global Compact Compliance Principles, which is aimed at raising corporate standards in relation to human rights, labor, the environment and corruption. Index managers monitor those at risk of breaching the U.N. principles.

The first way that ESG analysis can unlock emerging market growth is by identifying companies providing solutions to sustainability challenges. Looking at how drinking water and clean energy can be provided to the expanding middle classes in Asia and beyond, for example, can highlight companies well-placed to form the industries of the future.

One example is Beijing Enterprises Water Group, which is capitalizing on widespread water pollution in China by providing sustainable wastewater treatment. In the first half of 2017, a company joint venture won contracts for 46 billion yuan ($7 billion) worth of water environmental renovation projects.

BYD is another Chinese example. Nine years ago, the company was a little-known mobile phone battery maker in Shenzhen but it has built on its expertise to become one of the world's largest manufacturers of electric vehicles.

ENN Energy, China's third-largest natural gas distributor and a leading innovator, is also well-placed to benefit as the country shifts away from coal consumption. Gas consumption has grown at double-digit rates over the past five years.

The ESG lens is not just about helping investors to spot growing markets and products. It also provides crucial insight into management quality, operational efficiency and potential risk exposure, important issues in volatile emerging markets, which are often characterized by weak regulatory structures.

For example, strong management tends to lead to lower operational costs and higher returns on capital. Bank Rakyat Indonesia, which has a strong microfinance model, lends to the communities in which it raises deposits, provides mentoring to women and small businesses, and has an impressive recruiting and talent training program. The bank has little exposure in its lending book to carbon-intensive sectors such as oil, gas, coal and automakers. As a result, it boasts an average return on capital of 25%, one of the highest globally in its sector.

Investors who plan for the long term should consider screening out companies with poor ESG records and those that derive a majority of their income from unsustainable activities. For example, Boston Common Asset Management has screened out companies such as Coal India and South Korean cigarette producer KT&G on this basis, as well as PetroChina, the listed arm of state-owned China National Petroleum Corporation, because of its parent company's record of human rights violations in Sudan.

We believe these companies have greater exposure than their peers to reputational risks or tightening environmental and public health regulations, and thus ultimately would be poor investments. On the institutional side, South Korea's National Pension Service, the largest stock investor in that country, said in December that it would introduce a stewardship code aimed at influencing other investors to engage with companies in ensuring standards of corporate governance.

Meanwhile, in India, renewable energy has been deemed a priority lending sector for banks, and the Securities and Exchange Board of India has issued voluntary green bond guidelines, important steps that are set to increase the momentum behind sustainable investment in India.

Global institutional investors naturally carry the most weight in actively engaging Asian companies. But the increasing adoption of stewardship codes, protection of minority shareholder rights, promotion of independent directors and more guidance on ESG disclosures by stock exchanges in the region will require domestic institutional investors to step up as responsible shareholders.

We are already seeing signs in places such as India and South Korea that shareholder activism by retail and institutional investors is ramping up, particularly as the financial impact of climate change is felt more keenly.

Strong corporate governance and sustainability practices, as well as diverse leadership, are prerequisites for emerging market companies in Asia hoping to compete globally and appeal to the growing middle classes at home.

For investors, applying an ESG lens to the products and processes of these companies can help to identify those best placed to compete in an increasingly crowded field. Lauren Compere is a managing director and director of shareowner engagement at Boston Common Asset Management, a U.S.-based specialist ethical investment manager. This articleshould not be considered a recommendation to buy or sell any security.