BANGKOK -- Monday night's deadly blast in central Bangkok, which killed 22 people and injured 123 more, has struck a heavy blow at tourism, one of the few sectors showing signs of recovery in Thailand's beleaguered economy. 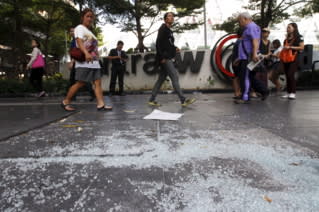 Authorities are looking for a suspect seen on surveillance cameras who appeared to leave a backpack at the Erawan Shrine in Bangkok on Monday night shortly before a bomb exploded.

The unsolved bombing at the Erawan Shrine next to Bangkok's busiest traffic intersection, at a time when it was packed with locals and tourists, caused serious damage to investor sentiment. Indeed, Aug. 18 turned out to be one of the gloomiest days on the Stock Exchange of Thailand (SET) in years.

The benchmark Thai Composite Index was down all day, closing at 1,372.61, a fall of 36.13 points on Monday's close. The one-day drop of 2.6% was the largest in over a year as the index fell back to the level of Mar. 28 last year in the troubled run-up to a military coup on May 22. Tuesday's trading saw 353 billion baht (about $10 billion) wiped off the market capitalization.

The Thai economy has always been heavily reliant on tourism, more so since the coup. Travel and tourism contributed 2,345.1 billion baht ($65.8 billion) in 2014, about 19.3% of gross domestic product. A World Travel & Tourism Council report had predicted this would increase.

Shares hardest hit by the blast were in tourism-related companies. Central Plaza Hotel and The Erawan Group, both major hotel operators in Bangkok, lost over 10% of their value; Minor International, another leading hospitality company, dropped 7%.

Airlines were affected across the board. Ailing national flag-carrier, Thai Airways International, Asia Aviation, a holding company of AirAsia subsidiary Thai AirAsia, Bangkok Airways and Nok Airlines all saw their shares tumble between 6 and 9%. Airports of Thailand meanwhile lost 7% in heavy trading.

Other major shares also suffered, including PTT, the SET's largest market cap stock. "I am sure that the incident will have an impact on Thai economy as tourism is bound to be hit," PTT President and Chief Executive Pailin Chuchottaworn told the Nikkei Asian Review after an earnings conference on Aug. 18, when his company dropped 6%. Pailin said he hoped the fall would only be "temporary."

Prayuth Chan-ocha, the prime minister and former army chief, said the bombing was carried out by individuals or groups "who may be pursuing political gain or other intentions by damaging the economy and tourism."

Prayuth's concerns resonated elsewhere. China sent over 4 million visitors to Thailand in the first six months of the year and is now the kingdom's largest source of tourists. Hua Chunyin, a foreign ministry spokeswomen, harshly condemned the incident.

It put the rest of Thailand on yellow alert, a level that warns visitors to "monitor the situation and exercise caution." Two Hong Kong residents were killed in the blast, and two injured.

Euben Paracuelles, an economist covering Thailand for Nomura, is pessimistic. The bombing "will obviously damage what is already a negative economic outlook, posing further significant downside risks", he said. He noted that tourism has been the economy's "lone bright spot" this year. By his analysis, it accounted for about two-thirds of the 2.9 % national economic growth seen in the first half of this year.

With security concerns already worrying investors, Paracuelles pointed to another headwind. Going forward six months, he expects the recent yuan depreciation will affect arrivals from China, which consists of 27% of the total.

The SET, the Securities and Exchange Commission and three other local capital market organizations issued a joint statement saying that Thailand's economic stability and the fundamentals of listed companies "were not significantly affected" by the bombing.

They advised investors "to closely monitor news and information from reliable sources as well as exercise discretion before making investment decisions". Their appeals had little discernible impact.