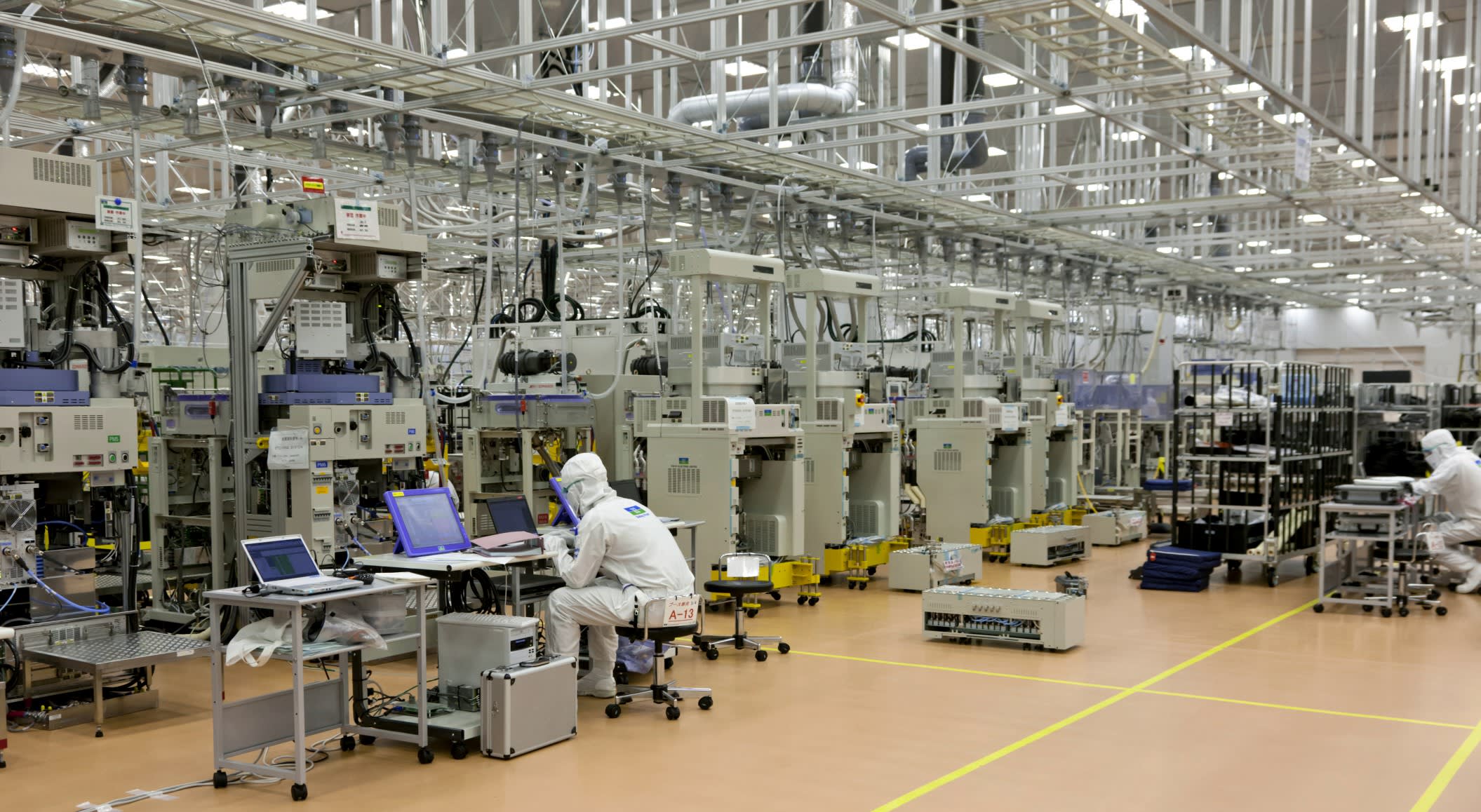 TOKYO -- Tokyo Electron faces an uphill climb to survive on its own.

Japan's biggest chipmaking equipment producer had to shift its focus of attention after April, when a merger plan with Applied Materials of the U.S., the world's largest semiconductor production machinery maker, was called off.

The new focus is split between high-tech equipment for customers who make smartphone components and maintaining previous-generation equipment being used by clients hoping to ride the Internet of Things wave.

The company's core plant, in Miyagi Prefecture, is the newest among four domestic production sites. The plant, operated by Tokyo Electron Miyagi, opened in 2011.

Inside a clean room, the biggest in Japan, a dark area of roughly 100 sq. meters was set up in December. The area, separated by black curtains, is used for final examinations of equipment before it is shipped out. Fine airborne particles able to sneak into this area are one-hundredth the size of those in the surrounding area. Black lights help examiners find these particles inside the equipment.

Masayuki Kojima, Tokyo Electron Miyagi's senior executive vice president, said this kind of "nitpicking" is demanded by clients, who use the machinery to make ever-smaller chips.

Chipmakers annually invest 1 trillion yen ($8.64 billion) to help them scale down their products. To win orders from them, semiconductor-manufacturing equipment producers have to keep ahead of the technological curve.

For the year ending next month, Tokyo Electron is to spend 78 billion yen, or 12% of the company's sales, on research and development.

To grow, the company has to grab bigger shares in both of its targeted markets, said Toshiki Kawai, who has been president and CEO of Tokyo Electron since January.

Although group net profit for the April-December period jumped 58% on the year to 59.2 billion yen, the slowing global economy is starting to cast a pall. Tough times are expected, and they are dictating Tokyo Electron's two-prong strategy.

Tokyo Electron's best equipment allows clients to produce 10-nanometer chips that go into smartphones and other devices. The company expects to gain 5nm capability within a few years.

The equipment maker's coater/developers -- machines used to coat wafers with a light-sensitive material so circuit patterns can be developed on the silicon -- enjoy an 80% share of the market.

Tokyo Electron has models that can be used in six of about a dozen semiconductor manufacturing processes. This makes it competitive with Applied Materials.

Tokyo Electron will also try to build a revenue stream around maintaining previous-generation chipmaking equipment. Here, it is betting that the Internet of Things will take off and create demand for a raft of products that can run on legacy chips.

The Internet of Things envisions consumers hooking up their refrigerators and other appliances to the Internet.

About 25 years ago, Tokyo Electron was the world's No. 1 chipmaking equipment producer by market share. Throughout its history, it has delivered more than 57,000 pieces of equipment around the globe -- far more than any of its rivals.

Kawai sees the Internet of Things producing a tide of demand that will lift the operating rates of these legacy machines. The CEO thus sees demand for maintenance services.

In October, Tokyo Electron launched a division specializing in parts replacement and maintenance operations that can remotely monitor the current state of clients' chipmaking equipment.

By fiscal 2019, Tokyo Electron sees its field solutions business bringing in sales of 200 billion yen, up 20% from fiscal 2014.

The world semiconductor market tends to ride a boom and bust roller coaster. But maintenance services might be able to escape this so-called "silicon cycle."