BANGKOK -- Thai investors have reacted to former Prime Minister Yingluck Shinawatra's failure to appear in court by sending the nation's stocks to a high not seen in two and a half years.

On Tuesday, Thailand's SET composite index closed above the 1,600-point threshold for the first time since February 2015. Although the benchmark gave up some of that gain Wednesday, it still finished at 1,613.34 points -- 2.4% higher compared with the end of last week's sessions. 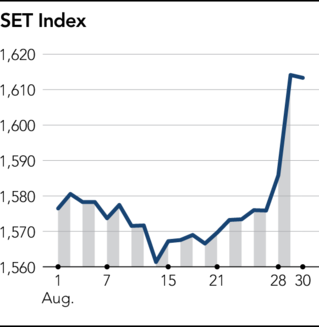 Investors had worried that partisans loyal to Thaksin Shinawatra, a former prime minister and Yingluck's older brother, would launch protests and disrupt business activities if the courts find her guilty of negligence over her government's money-losing rice-subsidy program. A verdict, originally scheduled for Friday at the Supreme Court in Bangkok, would have carried a prison sentence of up to 10 years.

But Yingluck's decision to skip her court date, and apparent flight from Thailand, "removes the risk of a bout of social instability that could have been triggered if she had received a jail sentence at the court hearing," risk consultancy firm Eurasia Group wrote in a report dated Tuesday. Yingluck is said to be in Dubai with her brother, who is also a fugitive from a court conviction.

Thailand still appears to remain split between pro- and anti-Thaksin forces. The country has been under military rule since a May 2014 coup, which occurred after months of political crisis following protests against Yingluck's government, and political activities are strictly forbidden. But if that embargo is lifted ahead of elections that could be held at the end of 2018, those divisions may flare up once again.

The military junta has been using the carrot of infrastructure projects and subsidies for low-income earners in a bid to draw rural voters in Thailand's north and northeast regions. Those areas have served as a political base for the pro-Thaksin camp, which has won every general election since 2001.