Baby formula producer Beingmate Baby & Child Food opened 6.5% higher, at 6.40 yuan, on the Shenzhen Stock Exchange, building on a 8.1% gain on Monday when the policy change was announced. The Hangzhou-based company is one of China's largest baby formula makers, sourcing raw materials from countries such as Australia, New Zealand and Ireland.

Chinese President Xi Jinping, who chaired the Monday meeting of top Communist Party officials where the policy change was approved, said the government will support couples who want to have a third child.

The announcement follows publication last month of the National Population Census 2020, which revealed that China's average annual population growth fell to 0.53% over the past decade, compared with 0.57% in the 2010 census.

The decline reflected the failure of the two-child policy introduced in 2016 to lift the country's birthrate. Births fell 18% in 2020 from a year earlier to 12 million.

For relaxed planning controls to be effective, economists say policymakers need to reduce the burden of child care, which is seen as the main deterrent for couples considering more children. 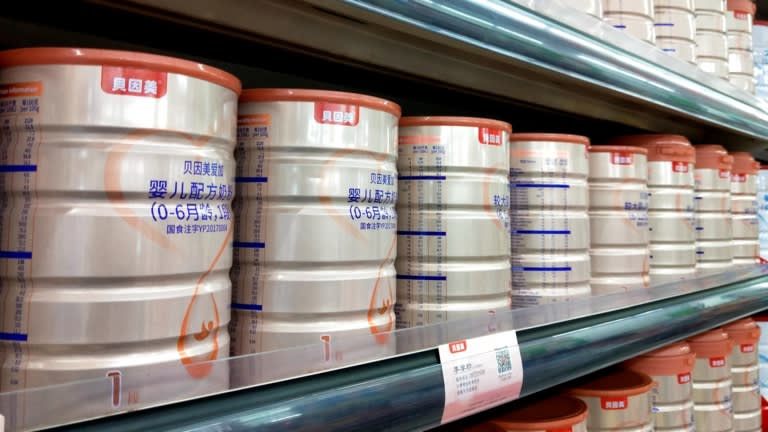 "Couples' fertility choices are, to a large extent, affected by cost-benefit trade-offs," said Fang Hanming, an economics professor at the University of Pennsylvania. "The costs of raising children include not just the labor market opportunity cost for mothers, but also the costs of day care, education, housing and health care, among others."

Preschool education ate up 26% of annual household income for parents, according to a 2017 report on Chinese Family Education Consumption compiled by media company Sina.com. For older children, secondary school and college education took slices equal to 21% and 29% of household income, respectively. The report found that nearly 90% of children also attend after-school classes.

Compulsory education begins with six years of primary school and three years of junior high, but advocates like Fang say the government should extend the mandate to cover three years of senior high school and make schooling free for all.

"It is crucial to equalize the allocation of the resources for education and health care across rural and urban areas because the quality of China's next generation of workers is as important as the quantity," he said.

The three-child policy will become a new driver of births if the policy is effective, U.S. investment bank Jefferies wrote in a research note on Tuesday. It forecast that births could rise 2% to 7% with the policy change.

China is not alone in facing falling births. Fertility rates are already much lower in countries including Japan, Singapore and South Korea, said Herald van der Linde, head of Asia-Pacific equity strategy for HSBC. "In all these countries, the fertility rate is below 2.1, which is the replacement rate," he said.

High child care costs, employment discrimination against women of childbearing age and a lack of child care facilities in the workplace factor into low birthrates, Linde said. "All sorts of policies have been thrown at families to have more babies in other countries -- even cash handouts -- but often with little effect," he said.

This may explain why some investors failed to get behind the sectoral rally on Tuesday. Shares of China Feihe, the country's largest infant formula producer, were 3% lower at 21.10 Hong Kong dollars at midday.