TOKYO -- The Bank of Japan will start lending shares in exchange-traded funds to brokerages as early as spring, looking to restore some of the liquidity it has drained from the market via its massive monetary easing program.

The central bank began considering ETF lending in April as part of a plan to improve the sustainability of its asset buying, which has distorted markets due to the sheer scale of the effort.

The bank's Japan stock ETF holdings totaled 28.9 trillion yen ($266 billion) as of March 31, amounting to nearly 80% of the entire market. The BOJ is on track to top Japan's Government Pension Investment Fund as the leading holder of Tokyo-listed stocks as early as next year.

Besides improving trading for retail investors, more liquidity also would make it easier for the central bank to conduct its own ETF purchases, as well as offset some of the costs through lending fees. 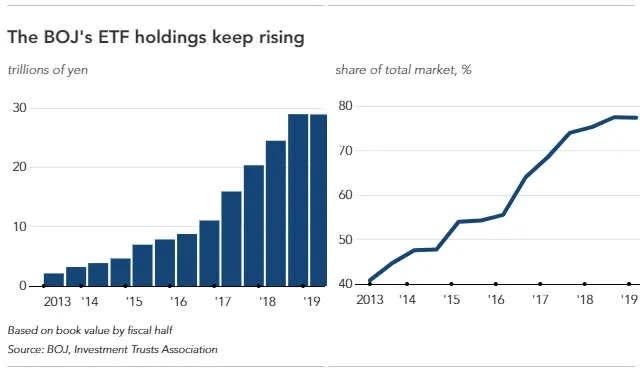 Brokerages could borrow ETFs from the Bank of Japan and then "short-sell" them back to the bank, said Eiji Dohke, an analyst at SBI Securities.

Market makers, such as brokerages and high-frequency traders, need to keep ETF inventory on hand to ensure that retail investors can readily buy and sell.

But the risk of price fluctuations limits the amount they can hold at once, making it difficult to fulfill large buy orders. Being able to borrow from the BOJ as needed would let market makers cover such shortfalls.

Central bank Gov. Haruhiko Kuroda told reporters in April that the goal of the lending program was to improve the functioning of the ETF market. Frequent ETF lending, mainly by pension funds, contributes to the abundant liquidity of the U.S. market.

The proposal, which is still being finalized, has drawn criticism.

In a briefing for market participants, the Bank of Japan said it planned to take bids for ETF lending once per month. This would require market makers to estimate demand a month in advance. Excess ETFs not sold to investors would return to the central bank, but market makers still would have to eat the cost of borrowing them.

"Being able to borrow from the BOJ whenever there's demand and settle the transaction then would be ideal. Once a month is too little," a market player said.