TOKYO -- Toyota Motor's stock price jumped 3.4% to close at 9,423 yen on the Tokyo market on Tuesday, reaching its highest-ever level.

Shares in the Japanese automaker have climbed rapidly since mid-May as investors welcome its bullish sales forecast and ability to weather the global chip shortage thanks to its supply chain management.

Its shares have risen in seven of the last eight trading sessions and surged 13% over the past three weeks, gaining momentum since it announced last month its earnings forecast for the year through March 2022.

Toyota is the biggest Japanese company by market cap, standing at more than double that of the second-biggest, SoftBank Group. Compared to its German rivals, Toyota's market cap is about 60% more than that of Volkswagen and nearly triple the amount of Daimler's.

Tuesday's stock price jump came despite news that Toyota plans to shut down production in Malaysia as the country gets ready to enter a coronavirus lockdown. 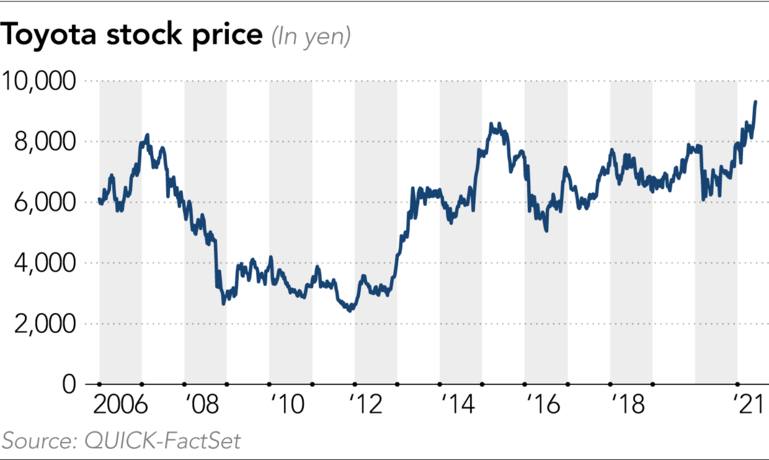 The steady rise in its shares is a result of investors betting on the automaker's growth potential, including its strong sales outlook overseas.

Toyota expects unit sales to reach 8.7 million this year, up 13.8% from fiscal 2020, and also anticipates strong profits, forecasting a net income of 2.3 trillion yen, up 2.4% from the previous year.

Last week Toyota revealed that its global sales in April doubled from a year earlier to 859,448 units, logging a record high for the month as demand continues to pick up following the coronavirus-related slump last year.

Along with the bright outlook, investors have also been comforted by Toyota's carefully managed supply chain. During the company's earnings announcement in May, Chief Financial Officer Kenta Kon said that it "does not expect to suffer a major impact" from the chip shortage.

While the company has temporarily suspended operations on three production lines at two Japanese factories as a result of the squeeze, it said the impact will be limited to 20,000 units and had already been reflected in its earnings forecast, easing investor concerns.

In May, Toyota set a target of selling 8 million electrified vehicles in 2030, of which 2 million will be battery and fuel-cell electric vehicles.

SMBC Nikko's senior analyst, Toshihide Kinoshita, writes in a report that Toyota indicated plans to "establish a system that can flexibly respond to changes in the development system" of EVs. He also points out that the company's goal to expand its battery supply and show "its full commitment to electrifying its vehicles, including BEVs, is positive."

Arifumi Yoshida, an auto analyst at Citigroup Global Markets Japan, believes that Toyota's EV target seems reasonable and notes: "The plans to source 180GWh in batteries (including via in-house production) shows in our view its seriousness, which is positive." He added: "We see the market reacting positively to Toyota's explanations, which were more thorough than they have been."

Meanwhile, some investors are cautious that overheated momentum will lead to a short-term correction in Toyota's share price.

Kazuharu Konishi, general manager of Mitsubishi UFJ Kokusai Asset Management's equity investment division, said that over the long-term, "some investors are worried that Toyota's focus on domestic production will hinder its EV strategy".

Toyota has stressed the importance of domestic production, believing that it will protect the fundamental technologies of Japan's auto industry, as well as provide jobs for skilled people.

The automaker has worked hard for decades to maintain an annual domestic output of 3 million vehicles.

"The company could face some difficulties in the future if it has to adjust its strategy and increase overseas procurement in a bid to accelerate its EV shift," Konishi said, explaining that its emphasis on domestic production could lead to a delay in adopting EVs into its lineup.

Toyota's market cap is still far lower than that of U.S. EV maker Tesla, whose market cap is an astounding $602 billion, more than double that of Toyota.