Trade war stands to help Samsung and hurt Foxconn in 2019

TOKYO -- Samsung Electronics and companies that have shifted production to Southeast Asia will likely emerge as beneficiaries of the Sino-American trade war in 2019, market players told Nikkei in a survey.

The tensions that escalated in 2018 are likely to continue reverberating, they said. Many cited non-Chinese telecommunications players as companies to watch.

With the U.S. increasingly alarmed by the rise of Chinese enterprises and their associated security risks, Samsung stands to benefit from moves by Washington and others to shut out products from Chinese telecom companies.

In the emerging field of fifth-generation wireless technology, "the fact that the U.S. and countries close to it are banning base stations made by Huawei Technologies will work in Samsung's favor," predicted analyst Kim Yong-woo of Seoul-based SK Securities.

Samsung supplies telecom equipment to top American carrier Verizon Communications, which launched 5G service in 2018, and anticipates orders from outside the U.S. as well.

2018 saw the U.S. impose punitive additional tariffs on $250 billion of items from China, or roughly half of annual total goods imports from the country. Washington looks likely to raise tariff rates or expand the scope of the duties. It could choose to do both as it seeks a fundamental overhaul of Chinese trade practices, such as forced technology transfers and intellectual property infringement.

Charles Hsiao, chairman of Taiwan's Fubon Securities Investment Services, predicts that many Taiwanese contract manufacturers will be impacted. "Taiwan's contract manufacturers make products such as personal computers and smartphones in China and export them to the U.S. They won't be able to escape damage," he said.

Hon Hai Precision Industry, or Foxconn Technology, Compal Electronics and Quanta Computer are in this group.

Carmen Lee, head of research at Singapore's OCBC Investment Research, said Chinese companies in industries heavily reliant on exports to the U.S., such as textiles and electronics, could suffer a major blow.

Textile makers that have relocated their manufacturing operations to Southeast Asia, meanwhile, are unlikely to be greatly affected, said Fubon Securities' Hsiao.

One of these is Taiwanese apparel maker Eclat Textile, which pulled the plug on China-based factories at the end of 2016 due to wage hikes, shifting to Vietnam and other Southeast Asian countries. The supplier to Nike, Adidas and Under Armour is busy dealing with inquiries from clients wishing to avoid trade war risks. If tit-for-tat tariffs throttle U.S. and Chinese exports to each other, exports from other countries and regions to the two countries will increase. Companies in the Association of Southeast Asian Nations "might be relative winners," said Trevor Kalcic, head of ASEAN equity research at Nomura Securities.

He singled out Malaysian chemical producer Petronas Chemicals Group. Other expected beneficiaries include Thailand's Siam Cement Group, with its range of construction and industrial products.

Daiwa's Kitney sees China Railway Construction to be a winner in 2019 as Beijing looks likely to spur investment in railway, road and other infrastructure construction projects by greenlighting local government bond issues.

The Sino-American trade war will have wide-ranging consequences, even affecting businesses with no direct relationship to trade between the two.

Tata Consultancy Services, a leading Indian information technology service company, earns more than half of its sales in North America. It will be adversely affected if U.S. companies cut back on IT investment, said Manish Gunwani, chief investment officer at Reliance Nippon Life Asset Management.

Even so, investors see a bright spot in companies poised to tap into emerging fields such as artificial intelligence and 5G.

Fubon Securities' Hsiao cited Taiwan Semiconductor Manufacturing as an example. The company, the world's largest semiconductor foundry, has seen a rise in orders from chipmakers including U.S.-based Nvidia and Advanced Micro Devices, known as AMD. Hsiao also has his eye on Taiwanese chip developer Mediatek's smartphone chips with AI processing. 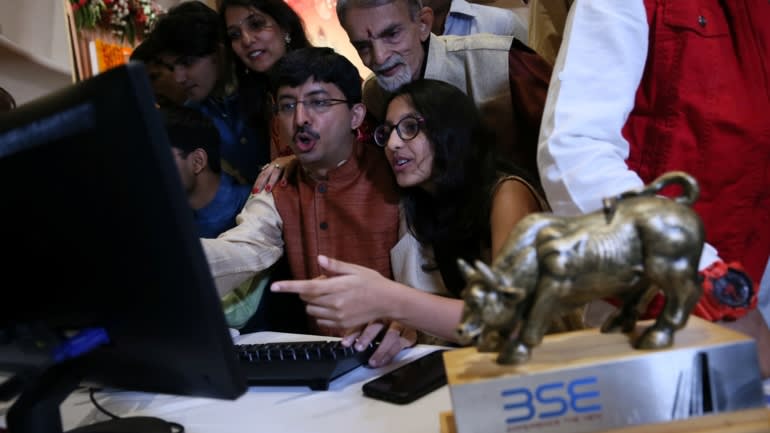 Indian companies in the electric power and other sectors striving to meet domestic demand are also drawing attention.    © Reuters

In other companies to watch, analysts pointed to those in India, riding on the country's high economic growth. Companies in sectors such as electric power, striving to meet domestic demand, are drawing attention. These domestic demand-driven stocks are undervalued because they have been under upward resistance for the past three to four years, Gunwani of Reliance Nippon said. He called attention to NTPC, India's national thermal power generator, and Power Grid Corp. of India, also a state-owned electric utilities company.