SHANGHAI -- The latest flare-up in the U.S.-China trade war has driven the yuan to its lowest level in four months, a trend that currency market watchers say Beijing may be tolerating to prop up exports.

The People's Bank of China, the country's central bank, on Tuesday set a yuan reference rate of 6.8365 to the dollar -- the weakest since early January. The currency fell to 6.88 at one point in daytime trading.

"The worsening relationship between the U.S. and China is cause for yuan-selling," a foreign exchange trader at a major bank said. "The trades are the market trying to pin down how far Chinese authorities intend for the yuan to weaken."

Tuesday's fix by the PBOC was seen by many as a response to the yuan's sell-off Monday in the offshore market, where speculative traders have a freer hand. The offshore yuan fell as far as 6.91 per dollar. Observers say the PBOC's move suggests a lenient stance on yuan weakness by Beijing.

The Trump administration has blamed a weak yuan for contributing to the U.S. trade deficit with China. If Beijing is indeed allowing the currency to cheapen, that would signal an unwillingness to give ground to Washington in trade talks.

"A weak yuan partly offset the impact of punitive tariffs imposed by the U.S. on China last year," Bank of China researcher Wang Youxin said. That spring, a dollar fetched around 6.2 yuan. Then the yuan depreciated as the trade frictions intensified.

Last December's summit between U.S. President Donald Trump and Chinese President Xi Jinping in Argentina was followed by a halt in the yuan's descent. But Trump said May 5 that he would raise tariffs on $200 billion worth of Chinese goods to 25% from 10%. In roughly a week since that announcement, the Chinese currency softened from roughly 6.7 against the dollar to between 6.8 and 6.9. 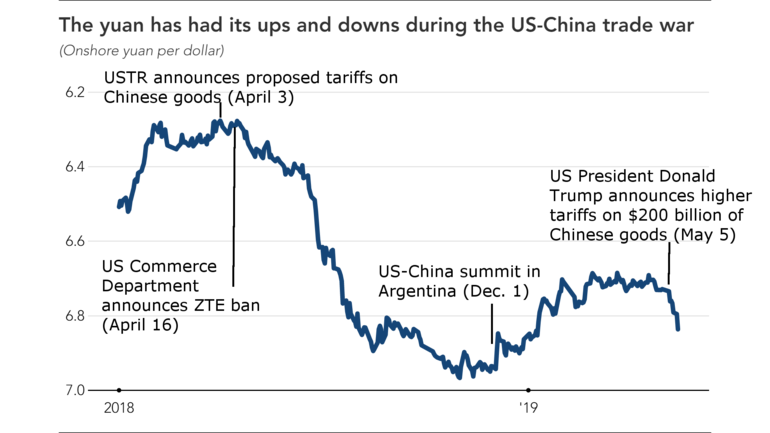 Speculation is mounting in the market on whether China will cut its holdings of U.S. government debt, fueled by a Monday tweet from Hu Xijin, editor-in-chief of the Communist Party-affiliated Global Times newspaper.

"China may stop purchasing US agricultural products and energy, reduce Boeing orders and restrict US service trade with China," Hu wrote. "Many Chinese scholars are discussing the possibility of dumping US Treasuries and how to do it specifically."

China exports far more in goods to the U.S. than it imports, giving Washington an asymmetric advantage in tit-for-tat tariffs. But China is the world's largest holder of Treasurys, at $1.1 trillion, and the so-called nuclear option of drawing down its holdings appears to be on the table.

"We are looking at all options," said Cui Tiankai, the Chinese ambassador to the U.S., in a 2018 interview.

Even if Beijing decides against such a response, its U.S. debt holdings could still decline. China's current-account surplus has dropped in recent years, leaving less to channel into Treasurys. A smaller Chinese trade surplus under American tariffs could push down holdings as well.

Whether Chinese officials are actually moving to shed American debt is unclear. Finding targets to redirect funds recouped from such sales is a complicated task. Treasurys are considered a stable asset, and reduced investment in them would invite doubts over China's economy.

The same is true for Beijing tolerating a weak yuan. A lower currency could ease the pain from the tariffs, but an overly cheap yuan could renew worries over capital flight. Chinese authorities tightened capital controls to allay concerns over outflows that surfaced between the latter half of 2015 and mid-2017. The moves hurt the yuan in the eyes of global investors and have hindered the currency's internationalization -- a stated goal of Beijing's.