TOKYO -- Rising fears over a U.S.-China trade war have sent Chinese stocks tumbling to a near five-month low with ripple effects across Southeast Asia, adding to pressures in the region at a time when rising U.S. interest rates are already worrying investors.

The Shanghai Composite Index gained 0.48% on Friday but fell 4.37% for the week, its worst weekly decline since the first week of February. It also marked its fifth straight weekly decline and an 18.8% drop from its January high, putting the index on the brink of the 20% threshold that defines a bear market. 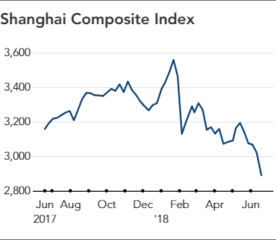 The recent volatility in Chinese stock markets is "driven by negative sentiment as a result of the considerable uncertainty injected into the China-U.S. trade dialogue over recent days," said Kevin Anderson, head of investments for Asia Pacific at State Street Global Advisors.

On June 15, U.S. President Donald Trump announced 25% tariffs on $50 billion worth of imports from China across 1,102 products. The first phase, which covers Chinese goods worth $34 billion, is expected to come into effect on July 6. Trump is fighting back against what he believes are "unfair" trade practices and China's acquisition of American intellectual property.

The trade jitters have spilled over, with investors pulling some $5.5 billion from emerging market stocks and bonds since June 12, according to a June 19 report by the Institute of International Finance.

The headwinds for financial markets in Southeast Asia, which forms a vital supply chain for U.S. and Chinese manufacturers, have been particularly strong. The Philippines' PSEi index fell for a seventh straight session on Friday, extending its decline since the beginning of the year to 17%.

Thailand's benchmark SET index hit a fresh nine-month low on Thursday and dropped further during early trading on Friday. Indonesia, where the stock market had been closed since June 11 for the Eid Al-Fitr holiday, has seen its Jakarta Composite Index fall nearly 3% after trading resumed on June 20.