US stock blacklists ripple through Hong Kong and China markets

Investors wary over Trump's order and uncertainty on Biden's policies 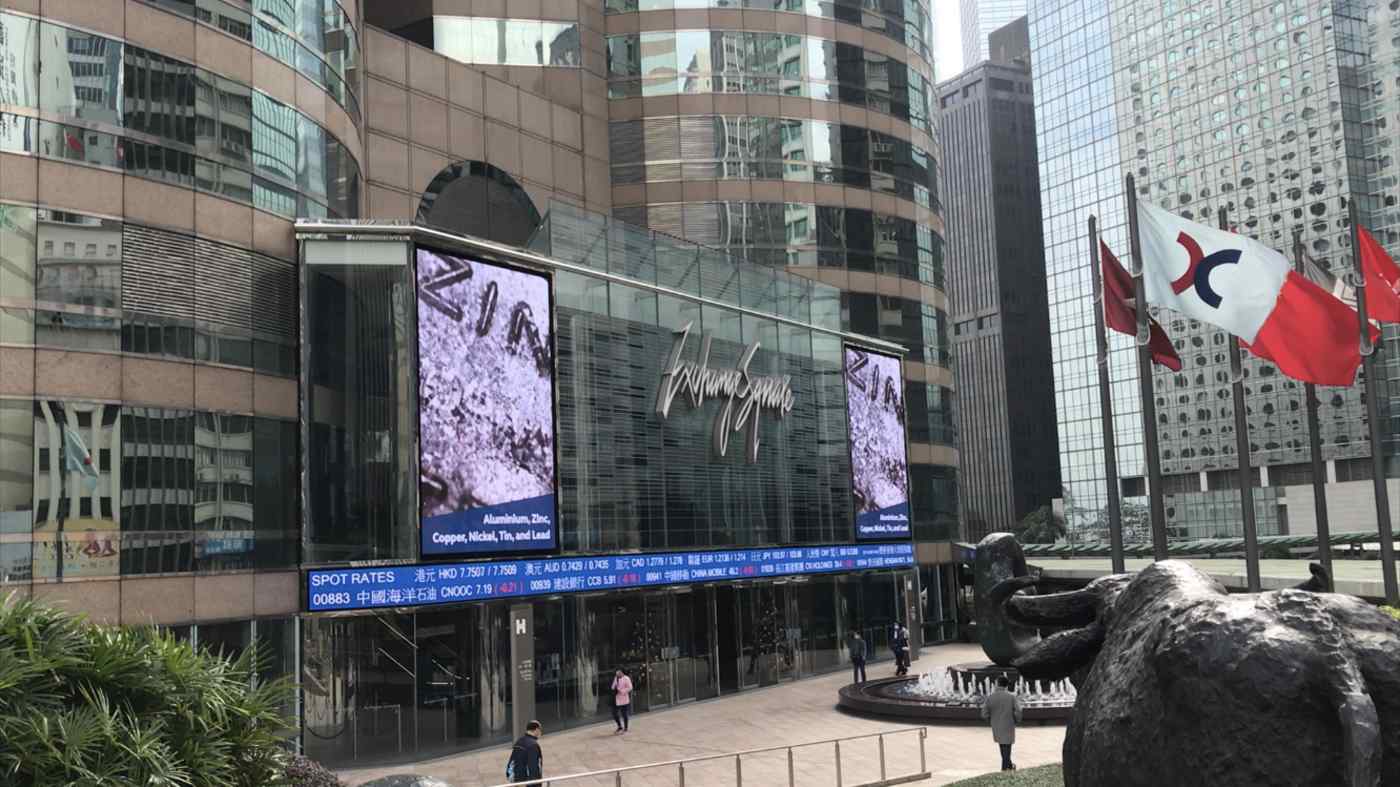 HONG KONG -- A crackdown on Chinese companies by the administration of U.S. President Donald Trump in its final days and uncertainty over the political direction of incoming President-elect Joe Biden could interrupt a rally in mainland stocks and lead to a surge in secondary listings in Hong Kong, analysts say.

Beginning on Monday, an executive order signed by Trump in November will prohibit purchases by U.S. investors of securities in 35 Chinese companies identified with links to the Chinese military, including top chipmaker Semiconductor Manufacturing International Corp., or SMIC, and multinational oil company CNOOC.

The U.S. administration also wants to blacklist technology conglomerates Alibaba Group Holding and Tencent Holdings -- which are not among the 35 companies -- and current discussions by the administration could lead to the deepening of the investment ban, such as forcing U.S. investors to fully divest any of their holdings, international media reports have said, citing sources.

Such moves could lead to a spate of forced delistings of Chinese companies from American exchanges, which as of October hosted 217 Chinese companies with a total market capitalization of $2.2 trillion, according to the U.S.-China Economic and Security Review Commission.

To counter some of those risks over a possible delisting, U.S.-listed Chinese companies, including search engine operator Baidu and video platform Bilibili, are expected to follow Alibaba and others in making secondary listings in Hong Kong, banking sources told Nikkei Asia. "While the long-term attractiveness of Chinese equities is not in doubt, what the uncertainty [from the U.S. measures] can do is scuttle some of [the] anticipated foreign inflows into mainland shares this year," said Frank Benzimra, head of Asia equity strategy at Societe Generale in Hong Kong. "Investors can instead find value in beaten-down regional stocks, especially with the coronavirus vaccine set to be rolled out."

The NYSE recently added to the uncertainty brought on by the executive order when it said in a series of flip-flop announcements that it would delist three state-run telecommunication companies -- China Mobile, China Telecom and China Unicom. The exchange later reversed course and said it would not evict the three companies, only to make another U-turn back to its original plan under pressure from the Trump administration.

While Trump is trying to cement his tough-on-China legacy before he leaves office on Jan. 20, the measures taking effect on Monday have the potential to derail one of the world's best-performing stock market indexes -- the CSI 300 Index.

Index compilers such as FTSE Russell and MSCI already have removed 11 mainland companies from their indexes.

The CSI 300 Index, which tracks the largest shares traded in Shanghai and Shenzhen, has surged 56% since its March trough, powered by foreign buying of mainland shares.

Global investors have poured $135 billion into Chinese shares in the six months through Sept. 30, according to data from the People's Bank of China, the central bank. They held a record 2.91 trillion yuan ($449.8 billion) in mainland equities in August, before trimming their holdings in September, the data show.

Foreign investors' flight from at least the stocks in the blacklist have picked up, according to traders, with CNOOC down about 16% on the New York Stock Exchange since early November when the executive order was issued.

However, the Hong Kong-traded shares of some of these companies have been bought by Chinese investors, data show. Since early November, the value of purchases by Chinese investors of China Railway Construction Corp. and CNOOC through the Stock Connect program, which allows investors in the mainland to purchase Hong Kong-listed shares, has almost tripled.

Chinese investors bought a net $2.5 billion worth of shares in Hong Kong on Monday through Stock Connect. That compares with a daily net buying average of $493 million over the past six months, according to data from HKEX.

Issuers of structured investment products linked to Hong Kong-traded shares, including JPMorgan Chase and Goldman Sachs, are taking some of them off the market following the U.S. investment ban. Hong Kong Exchanges & Clearing, the operator of the securities market, said on Monday that it is working closely with the relevant issuers to ensure an orderly delisting and to facilitate buyback arrangements.

HKEX said it did not expect the delistings to impact Hong Kong's structured products market, the largest in the world with more than 12,000 listed products. 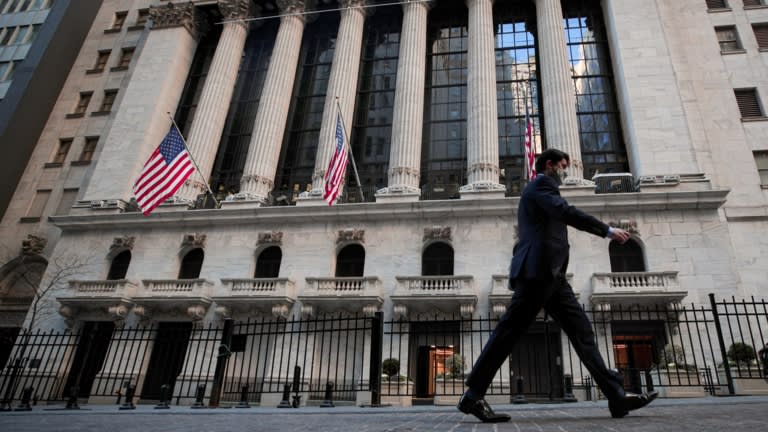 Laws enacted in the U.S. will boot out Chinese companies from the New York Stock Exchange unless American regulators can review their financial audits.   © Reuters

Still, global investors already are trying to protect their portfolios by putting together a basket of stocks in which they would take short positions -- betting that the price of the stocks will decline -- or using options that give an investor the right, but not the obligation, to buy or sell shares. These investors also are diversifying their holdings among various sectors and geographical areas.

"The U.S. ban on Chinese companies will certainly contribute to volatility as a function of some investors rebalancing," said Paul Sandhu, head of multi-asset quant solutions for Asia-Pacific at BNP Paribas Asset Management.

"Right now, diversifying portfolios across multiple markets and dynamically allocating will be rewarding," he said. "Also, option pricing is relatively attractive right now, so a deep downside hedge to cover extreme tail scenarios would be prudent."

Of the 35 Chinese companies facing the blacklist, investors have broadly identified 11 of those listed on the Hong Kong Stock Exchange in which to take short positions, including SMIC, CNOOC and China Railway Construction Corp., as well as China Mobile and China Telecom.

Investors arrived at these 11 companies by picking those that are included on blacklists prepared by various U.S. agencies, from the Pentagon to the State Department. Then they put a threshold of market valuation of at least $3 billion for each company to ensure ample trading volumes and a listing in Hong Kong.

While investors expect the Trump administration to ratchet up the pressure on China until the transition to a new government, they are uncertain of what the future Biden administration's investment policy will be.

"Biden has signaled that the fight against COVID-19 is the new administration's top policy priority," Benizimra of Societe Generale said. "When it comes to the investment ban, however, we would assume that there will be no change in the policy, at least in the first few months of the Biden presidency."

Until such uncertainties pass, global investors are looking to deploy part of their Asian holdings elsewhere in the region. Investors are betting on South Korea, where the benchmark Kospi Composite index hit a record in early January, as well as Indonesia, Taiwan, India and Thailand. Their wagers are based on the assumptions that economic growth will revive after vaccines for COVID-19 are administered, strong balance sheets allow companies to borrow and invest, tax pressures ease, and a weakening U.S. dollar boosts export revenues.

Chinese companies for their part are racing for second listings in Hong Kong. They expect these to act as a hedge against potential delistings that would come from the investment ban, and laws enacted in 2020 that will boot out Chinese companies from U.S. exchanges unless American regulators can review their financial audits. China forbids such review, citing national secrets.

Since November 2019 when Alibaba sold shares for its secondary listing in Hong Kong, 10 U.S.-listed Chinese companies have raised $30 billion in the territory, according to data compiled by Refinitiv. Analysts estimate that up to 60 more companies could list in Hong Kong in the coming years.

"New economy and U.S.-listed Chinese enterprises are expected to remain as the main drivers for listing activities on [the] Hong Kong Stock Exchange in 2021," Benson Wong, Hong Kong entrepreneur group leader at consultancy PwC, said last week in a call with journalists.

"Supported by a healthy pipeline, 2021 will be a great year for the Hong Kong IPO market," he said. "We are confident that the total IPO funds raised will hit a record high."