Value of 10 Chinese tech majors fall over $800bn since February 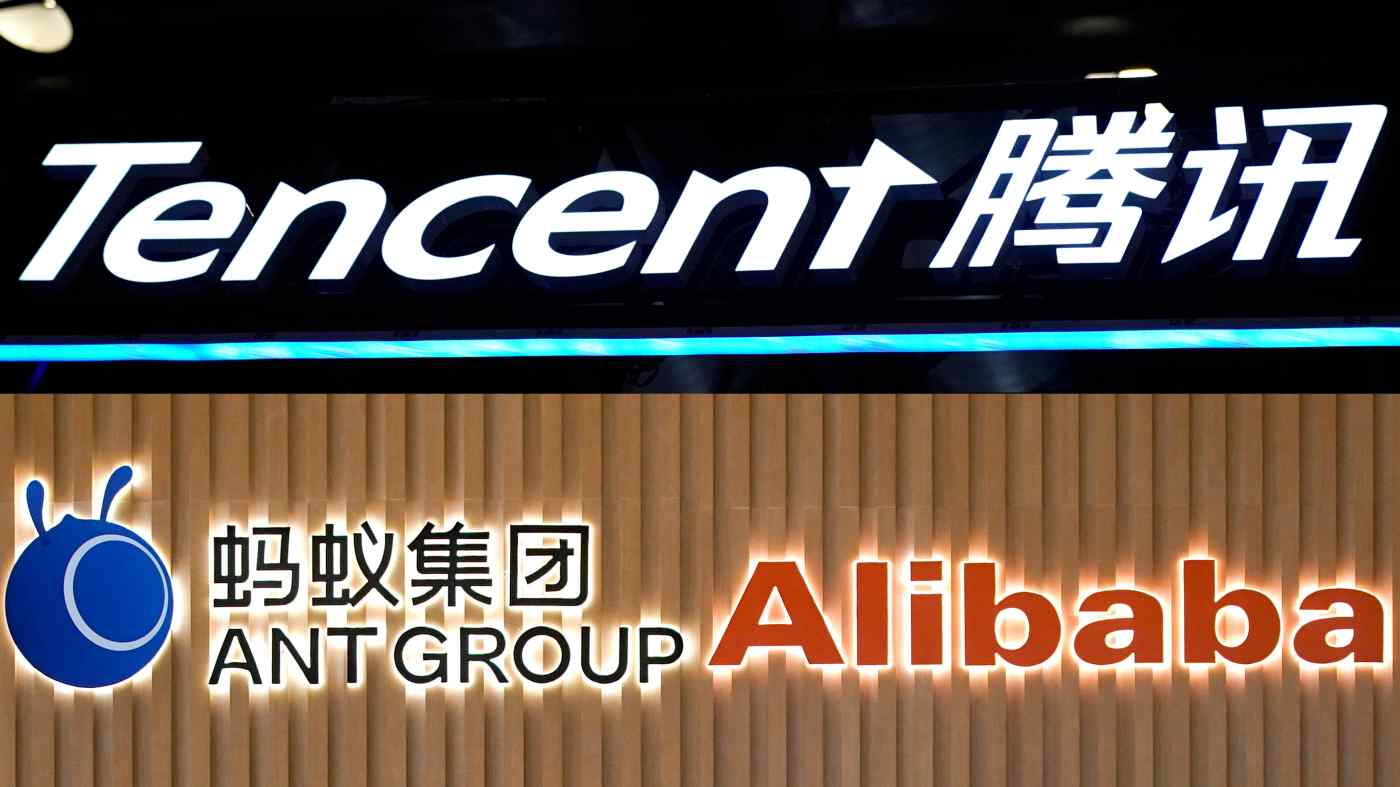 SHANGHAI -- China's once-popular technology companies are losing their shine, with their share prices plunging over the last few months, as investors grew nervous of government clampdowns in the sector.

The combined market capitalization of 10 leading IT and high tech companies, including Alibaba Group Holding and Tencent Holdings, has plunged by over $800 billion or almost 30% from a peak in February.

The Science and Technology Innovation Board, better know as the STAR board and home to some of the most prominent tech companies in China, is now hovering in a low range.

Tencent, which operates the messaging app WeChat, is one of those companies that have suffered this turn in fortune. On Tuesday, Tencent shares finished at 585.5 Hong Kong dollars, down more than 20% from a record high in February.

Tencent announced last Thursday that it posted a net profit of 47.7 billion yuan ($7.44 billion) in the January-March period, up 65% from a year earlier. That was in contrast to Alibaba, which incurred a net loss over the same period, due to a huge antitrust fine slapped on it. Yet, Tencent shares remain weak as the government toughened its grip on the company.

Earlier in May, Tencent was ordered to stop the illegal gathering of the personal information of the users of its apps. Alibaba and its financial arm Ant Group have also come under intense government scrutiny, which resulted in a high-profile suspension of the latter's listing plans in November. Shares in JD, e-retailer Pinduoduo and Meituan, which counts Tencent as a major shareholder, have fallen sharply along with those of other tech firms. Alibaba and Tencent have repeatedly invested in promising startups and their growth has raised the two giants' market values.

Investment banks say that Tencent and other shares are now undervalued, but the regulatory risk is putting a cap to any rises, GuoDu Securities said, echoing a widespread view.

The market caps of Alibaba, Tencent, Meituan, JD and short video app operator Kuaishou, listed in Hong Kong, have fallen by 20% to 40% from Feb. 17. The total of them has come to around HK$13.5 trillion ($17.4 billion), down a little more than HK$5.1 trillion.

As the combined market cap of Pinduoduo, search giant Baidu, financial services platform Lufax, video streaming site Bilibili and gaming platform NetEase, listed in the U.S., declined by some $150 billion during the same period, the 10 companies witnessed their market values shrink by a total of $801 billion.

In contrast, shares in Apple and other American IT giants are trading firmly.

Yet, China's reach can still be felt in the U.S. Mutual aid services provider Waterdrop, which was listed on the New York Stock Exchange on May 7, is now trading at the $7 level per share, compared with its IPO price of $12. Tencent holds a 20% stake in Waterdrop.

Lufax is also quoted below its IPO price. As its principal business, Lufax, like Ant Group, refers loan applications to banks and earns commissions from them. But financial regulators are urging Lufax to cut back on the service, citing increased financial risks. The company is planning to increase its own lending, which has spurred investor concerns about loan delinquencies and interest-rate risks.

Against such a backdrop, ByteDance, owner of short-video sensation TikTok, said in April it had frozen a plan to list some of its businesses. The company made the decision after taking into account regulatory risks and falls in the assessed value of its shares, many analysts said.

Overseas investors are turning to yuan-denominated bonds with higher yields than those in developed countries, pumping more than 3.6 trillion yuan into those assets by the end of April, up nearly 60% from a year earlier. Most of such bonds are considered to be government bonds and those issued by governmental banks.