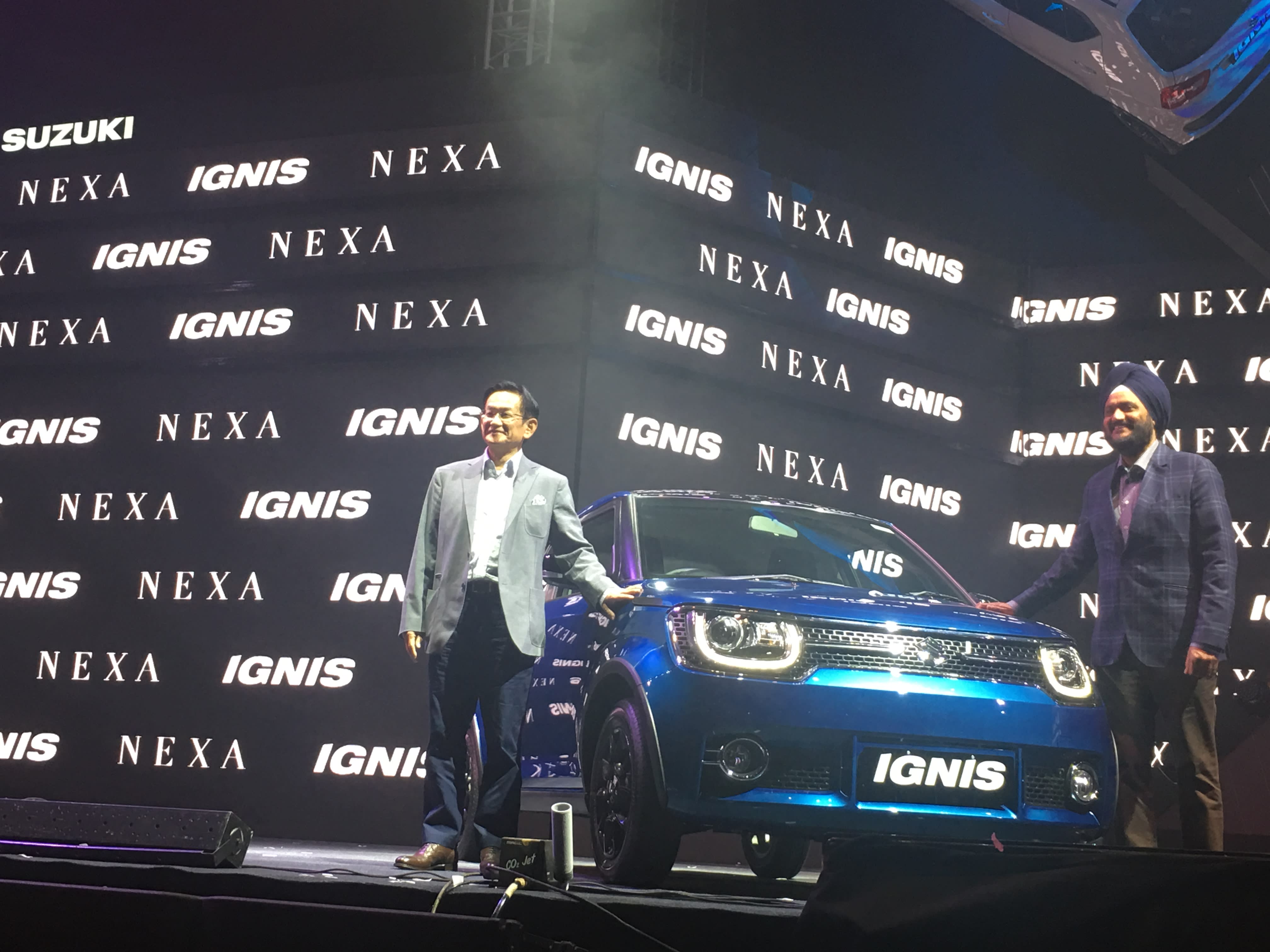 Maruti Suzuki Managing Director & CEO Kenichi Ayukawa, left, with R. S. Kalsi, executive director for marketing and sales, at the launch of the Ignis in New Delhi on Jan. 13 (Photo by Kiran Sharma)

The car is being offered through the company's Nexa showrooms, which also sell the Baleno and S-Cross models. It is available in both petrol and diesel variants powered by 1.2 liter and 1.3 liter engines respectively.

The hatchback, designed for the 18-35 age group, is being produced at the automaker's Gurgaon facility in northern Haryana state and comes with automatic gearshift options as well as an Android- and iOS-compatible smartphone linkage display audio system. Its research and development took three-and-a-half years and cost 9.5 billion rupees.

"Of these, 15 new models are to be launched in India in five years up to 2020," Ayukawa said, noting that in the last 36 months his company has introduced four new models -- Ciaz, S-Cross, Baleno and Vitara Brezza. "Importantly, these models were either in a new segment or in segments where Maruti Suzuki was not the leader," he said, noting the company is trying to keep pace with its consumers' preferences which are evolving fast.

Maruti Suzuki's two facilities in Haryana -- in Gurgaon and Manesar -- currently have a total production capacity of 1.5 million cars annually, and the company is aiming to achieve 2 million unit sales a year by 2020.

Ignis is attracting youngsters whose "favorite toys" thus far have been iPads, smartphones, laptops, etc., R.S. Kalsi, the company's executive director for marketing and sales said. "Certainly this category of millennials has a strong financial background."

"Currently we are looking at the domestic market," C.V. Raman, the company's executive director for engineering, said. "We will definitely be looking at other export markets in South Asia as well as Southeast Asia," he added.

Parent Suzuki Motor launched the Ignis in Japan in February last year, and as of the end of August had sold 18,000 units.

Taking Ignis to India, the company is eyeing the 440 million young adults who, it says, are set to drive the country's growth. Target customers are digitally-connected buyers seeking the best in design, features and global standards.

Ignis is the first car in the Maruti Suzuki portfolio to offer an "Android Auto" feature, which allows users to control multimedia functions via voice commands. It also offers personalization opportunities with concepts like roof wraps and interior styling.