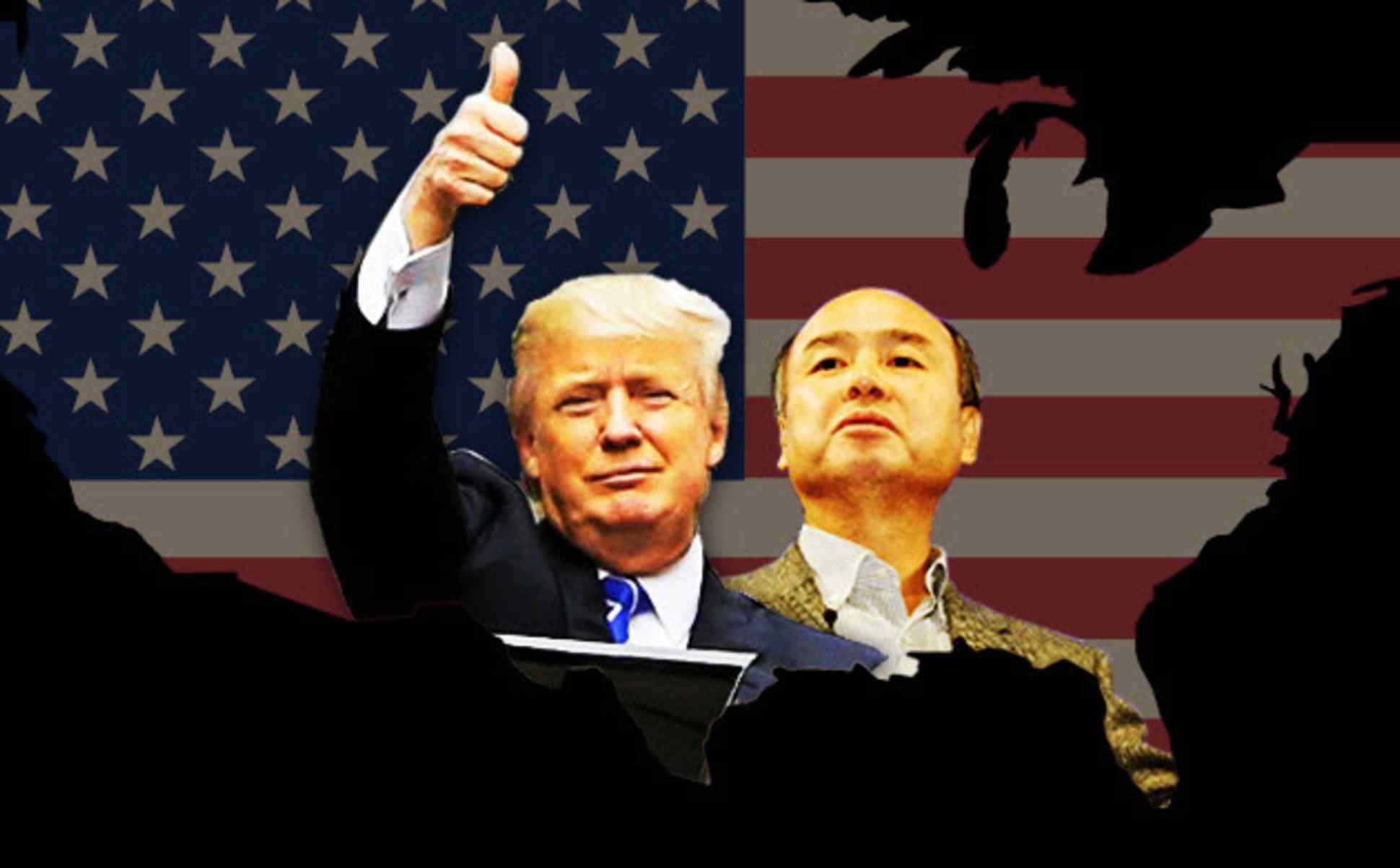 Masa and Donald: Why Son dabbles in politics

Can the Japanese billionaire help world leaders usher in the future?

Son has also rubbed shoulders with Donald Trump and Vladimir Putin. What motivates Son to forge ties with powerful people? And what is his real intention?

This is an old story. In the autumn of 1993, the 36-year-old Japanese entrepreneur visited the Comdex computer show that is held each year in Las Vegas, in the U.S. state of Nevada. After quickly walking around the floor, he went to see the man essentially running the trade fair -- Sheldon Adelson, a self-made billionaire. Son showed up in front of Adelson wearing no tie and said abruptly, "I want to buy Comdex and I am sure that I will be the future owner of the show."

Surprised, Adelson asked Son, "But do you have enough money to pay for it?"

Son replied, "Although I don't have money now, I will make money in the near future, so please do not sell it to anybody until I come back."

A year later, Son appeared again before Adelson and asked executives sitting in the same room for some privacy. He wanted a one-on-one with Adelson.

"I have no intention of discounting Comdex," Son said. "It is a one-shot deal, so will you tell me the price at which you can sell Comdex? If I cannot afford to buy it, I will give up on the deal."

When Son extended his right hand to Adelson, the American billionaire shook his hand. This culminated the first acquisition by someone who would go on to attain billionaire status himself ... and make a series of high-profile acquisitions.

In the winter of 2016, Son received an unexpected phone call. "Why don't you meet with President-elect Donald Trump?" the caller suggested. "I can arrange a meeting with him for you." The SoftBank president recognized the voice: It was Adelson's. Donald trump and "Masa" Son appear in the lobby of Trump Tower in New York on Dec.6, 2016.

The $800 million that Adelson got from Son for Comdex went on to seed a string of casinos and resorts. The magnate is now nicknamed "The King of Casinos."

The 83-year-old is a staunch conservative who makes generous contributions to the Republican Party and its candidates, including Trump. He also knows an opportunity when he sees one -- and arranging Son's meeting with Trump may help him in his bid to expand his casino empire into Japan.

Before meeting with the future U.S. president, Son tried frantically to come up with a "souvenir" for his host. He apparently succeeded. Just after their talks, Trump told reporters that SoftBank will invest $50 billion in the U.S. and create 50,000 new jobs. On Dec. 6, the two appeared in the lobby of Trump Tower, located on New York's Fifth Avenue, wearing similar red ties. Sometimes red is associated with the Republican Party.

Trump called Son "Masa" and referred to him as "one of the great men of industry." During their 45-minute meeting, Son had asked the future U.S. president to call him by his nickname, "Masa."

Striking up a sense of camaraderie with a future U.S. president was easy. Explaining the souvenir to SoftBank's two outside directors, however, was another matter entirely.

At some point, critics began accusing Son of trying serve his company's interests by cozying up to politicians. He hates to be labeled a "political merchant" and once yelled in public at an entrepreneur who had pointed out Son's personal connections with politicians. "It's none of your business," he shouted.

Son used to be indifferent to politics. Satoshi Shima served as head of the president's office at SoftBank for eight years starting in 2005, after having been a lawmaker from the Democratic Party of Japan. "Son," he said, "is rather politically tone-deaf."

In 2004, Son sued the Ministry of Internal Affairs and Communications, demanding that the telecoms regulator drop its plan to reallocate radio spectrum used for cell phone services. At the time, Taro Aso, now the deputy prime minister, served as internal affairs minister.

Recollecting those days, Son said, "I gradually became disgusted with the ministry's policy, and these feelings suddenly turned into anger, though Mr. Aso and I have known each other for some time."

He even went so far as to say that SoftBank would not accept retired bureaucrats for its executive posts for at least the next 100 years. His remarks seemingly indicate differences he has with Japan's political system and bureaucracy. Masayoshi Son speaks to a task force set up by Japan's Internal Affairs and Communications Ministry under the government of the Democratic Party of Japan.

Son also has a pragmatic side.

When the DPJ won a landslide victory in the 2009 general elections and took control of the government, Son quickly approached the new government. Shima played a role here. Son encouraged Kazuhiro Haraguchi, then the internal affairs minister, to adopt his "New Broadband Super Highway" proposal.

Essentially, Son was pushing for Japan to build out a nationwide fiber-optic network. The broadband infrastructure he envisioned would allow for super high speed transmissions of massive amounts of data. But the super network would require Nippon Telegraph and Telephone -- the country's main telecom and the owner of much of the country's communication lines -- to spin off its internet access division and lease its fiber-optic network to all telecom carriers, including SoftBank.

In the end, Son failed, but he did gain some of his pragmatism from this experience.

It was not the first time that Son had told a nation's government to stake its future on high-speed communications.

In June 1998 -- with the Asian financial crisis having pushed South Korea to the edge of an economic abyss -- Son and his long-time friend Bill Gates visited the Blue House. During a meeting with the two, then-South Korean President Kim Dae-jung asked, "What do you think we need to do in order to rebuild our economy?" Even though Kim did not exactly understand broadband back then, the president soon issued an executive order to cover the country with it. As a result, South Korea became a world leader in high-speed connectivity.

After visiting northeastern Japan in the aftermath of the devastating earthquake, tsunami and meltdowns of 2011, the SoftBank founder and CEO told directors and other senior executives that he would step down. Yanai later persuaded Son to retract that decision.

Ever since, Son has added to his SoftBank duties by energetically pushing for renewable energy.

Electrical grid projects need to be carried out at the national level. So what would be the first step in an Asiawide initiative? Son thought it might be transporting hydropower from Russia to Japan via Vladivostok, the Russian port city that sits just northeast of North Korea. Hokkaido is right across the narrow Sea of Japan.

So in the summer of 2012, Son began referring to a decision to meet with Russian President Vladimir Putin.

Yanai opposed such a tete-a-tete, fearing Son would come under criticism for cozying up to a politician. Son's plan fell through.

Last June, though, Son managed to have talks with the Russian leader, in St. Petersburg. Then, three months ago, Son was on hand at the Tokyo offices of the Japan Business Federation, the country's influential business lobby, when Putin visited. The two talked, put their arms around each other and smiled for the TV cameras.

Despite speculation that Son may have lost his interest in the electricity business, he is working behind the scenes to get his renewables project off the ground.

Son deeply admires Sakamoto Ryoma (1836-1867), a key player in the overthrow of the Tokugawa Shogunate. Ryoma became a loyal protege of Katsu Kaishu, whom the samurai had initially intended to assassinate. Son likes how Ryoma treated everyone, friend or foe, alike.

Yet Son believes Ryoma should have seen Japan's future from a broader perspective rather than seeing everything as either this or that, black or white, good or bad.

Son's attempts to benefit from personal relationships with politicians have yet to pay off big. Yes, he will sometimes use his political ties to realize a competitive advantage, but he is not playing the game with the intention of basking in political glory.

He's more about that broader perspective.