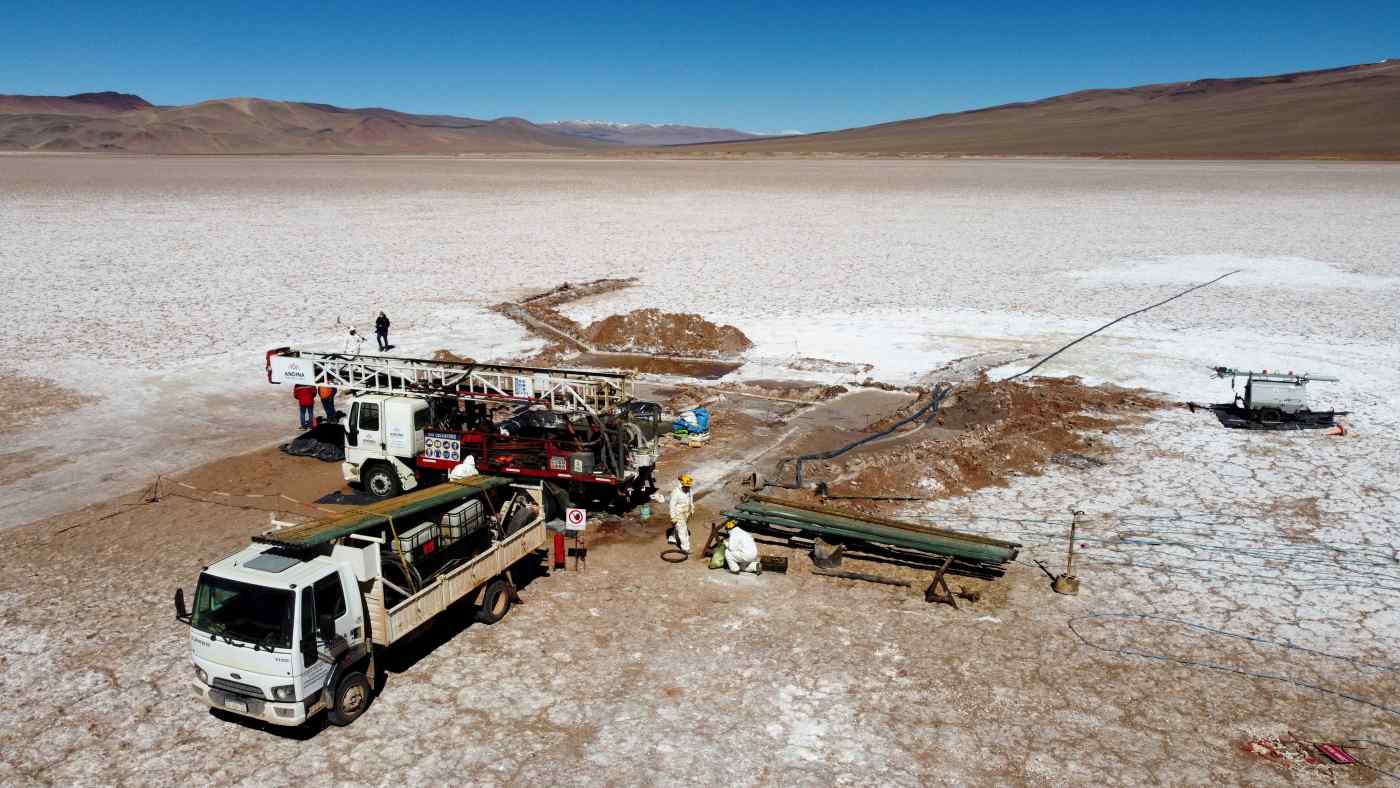 TOKYO -- Chinese companies have splurged over $1 billion on rights over three lithium mines in Argentina in as many weeks as a race to secure supplies of the "white gold" critical to most production of electric car batteries revs up.

Argentina, which has lagged Chile and Australia in lithium output, has been reforming laws, reducing taxes and improving infrastructure with an eye toward boosting export revenues.

Neo's main asset is the Tres Quebradas (3Q) Salar lithium brine project in Catamarca Province, an area of northwest Argentina included in the "Lithium Triangle" which also takes in parts of Bolivia and Chile.

CATL, which holds an 8% stake in Neo, said on Sept. 29 that it would buy Millennial Lithium, another Toronto-listed miner focused on Argentina, for CA$377 million. Millennial's main asset is the Pastos Grandes lithium brine project in Argentina's Salta Province.

China's Ganfeng Lithium, which in July had said it would buy Millennial for CA$353 million, meanwhile on Sept. 21 reached a deal to raise its stake in the Mariana lithium project in Salta to 100% by buying out the remaining 8.6% stake held by Toronto-listed International Lithium for CA$16.8 million.

Prices in China for lithium carbonate, the compound used to churn out lithium-ion batteries, have surged over 230% this year, hitting an all-time high earlier this month, according to investment bank Jefferies.

While prices for many commodities have risen steeply as well, lithium has gotten a particular lift from higher demand for electric vehicles.

In China alone, EV sales are running at almost triple last year's pace, with 2.16 million sold as of Sept. 30, according to China Association of Automobile Manufacturers data released on Tuesday. William Li, chief executive of Chinese EV maker Nio, projects that electrics will account for a fifth of total auto sales next year, up 6% on last year.

This surge in demand has fired up interest in the salt flats of the Lithium Triangle.

The three South American countries included in the area are together home to almost 60% of global lithium reserves, according to U.S. Geological Survey data, but Chilean mines are already well developed and Bolivia has long faced political instability.

"Argentina provides the most promising case for expansion of the lithium industry as it seeks opportunities to expedite its economy recovery," Ryan C. Berg, a senior fellow at the Center for Strategic and International Studies, said in a recent report. He noted that Argentina lags only Bolivia in overall identified reserves globally.

Zijin Chairman Chen Jinghe flagged his company's interest in buying into lithium production in August. In Sunday's announcement, he said, "Neo Lithium's 3Q lithium brine project... is one of the largest and highest-grade projects of its kind in the world," calling it "a good choice for Zijin to enter the field of new energy minerals."

The project is now in its pilot stage but is expected to yield 20,000 tons of battery-grade lithium carbonate annually for 35 years, according to a pre-feasibility study completed in April.

Zijin aims to close the deal in the first half of 2022, pending regulatory approvals. Analysts do not see serious hurdles in the way, with Daiwa's Dennis Ip noting that Argentina is "a relatively pro-China country."

Jack Shang of Citi, which has a "buy" rating on Zijin, called 3Q "a world class lithium brine asset" in a client note.

Zijin shares surged as much as 9.2% in Shanghai on Monday and closed 4.4% higher on Wednesday than last week's final price. The stock has risen 6.5% this week in Hong Kong where trading was suspended due to a typhoon on Wednesday. 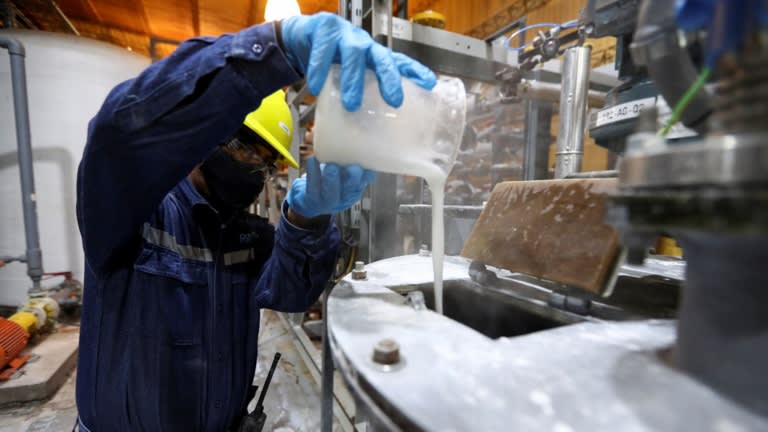 Prices in China for lithium carbonate, the compound used to make lithium-ion batteries, have risen more than 230% this year, hitting an all-time high earlier this month.   © Reuters

According to Millennial Lithium's feasibility study for Pastos Grandes, the project could yield 24,000 tons of battery-grade lithium carbonate annually over 40 years.

The first phase of the Mariana project, meanwhile, would carry an annual production capacity of 20,000 tons of lithium chloride.

Unlike CATL and Zijin, Ganfeng already has numerous lithium assets around the world.

In late August, it reached a deal to buy London-listed Bacanora Lithium for 284.8 million pounds ($387 million). Bacanora's main holding is a Mexican deposit projected to yield 20,000 tons of lithium carbonate a year.

Ganfeng also has mines in China and Australia, as well as the Cauchari-Olaroz lithium project in Jujuy Province, Argentina.

Construction on a first phase there is set to complete next year, setting the stage for extraction of 40,000 tons of lithium carbonate a year, with a second phase, with another 20,000 tons of capacity, set to come on line in 2025.

"Cauchari-Olaroz is on track to become the largest new lithium brine operation in over 20 years," George Ireland, chairman of Lithium Americas, a minority partner in the project, said earlier this year.

Ganfeng owns 12.6% of the American company and is also a lender to it.

Washington-based researcher Berg believes the U.S. should take note of the Chinese deal-making and the need for help in South American economies destabilized by COVID.

"Not only has China increased its investment in the Lithium Triangle countries, but it has also strengthened its bilateral relationships through its vaccine diplomacy," he said, warning corporate deals mean China "will likely continue its dominance of the emerging lithium industry."