TOKYO -- Japanese materials maker Toray Industries will ramp up production of carbon fiber for fuel cell vehicles in the U.S. and Japan by 50% this fiscal year, Nikkei has learned, pivoting to a field expected to see growth as demand from the aviation industry tumbles.

The company will switch over production lines for aircraft materials to make the stronger and more lightweight carbon fiber used in hydrogen tanks.

The shift comes as the coronavirus pandemic weighs on a major source of revenue for Toray, the world's top producer of carbon fiber. The aerospace industry accounted for 46% of net sales in the company's carbon fiber segment in fiscal 2019, about on par with such industrial applications as wind turbines.

But as air travel plunges, airlines around the world are postponing or canceling orders for new planes. Boeing said in July it would cut production of its 787 jets to six per month next year from 14 this year. The downturn spurred a U.S. Toray subsidiary to reduce its workforce by 25% in moves announced in June.

Toray has received some small orders for hydrogen tank material from customers in China, the U.S. and Europe, but anticipates broader use starting in 2023 or 2024. The company has positioned fuel cell vehicles as a top priority, eyeing several hundred million dollars in annual sales from the business by fiscal 2030. 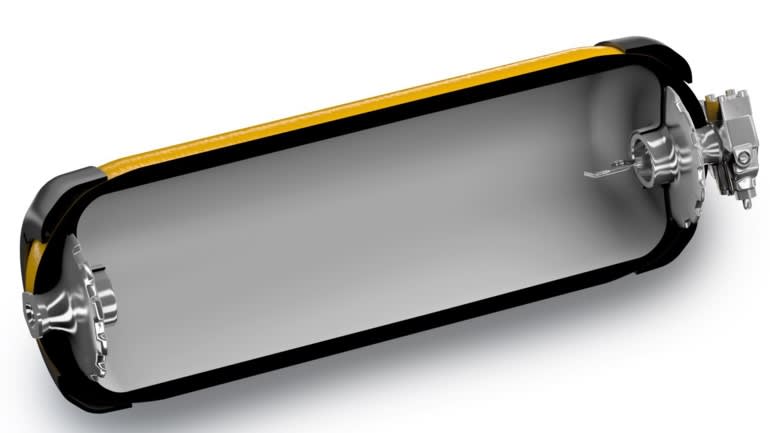 An image of a hydrogen tank for a Toyota Mirai fuel cell vehicle: Carbon fiber for such tanks needs to be stronger and lighter-weight than material for aircraft bodies. (Photo courtesy of Toyota)

Automakers have shown growing interest in hydrogen power, particularly for trucks and other commercial vehicles.

Daimler and Volvo announced a partnership in April to develop and produce fuel cell systems for heavy-duty vehicles. Toyota Motor is setting up a joint venture in the field with five Chinese companies, while Honda Motor has joined hands with Isuzu Motors.

Toray anticipates the market for carbon fiber used in hydrogen tanks reaching 150 billion yen ($1.44 billion) by around 2030, and looks to have a production system in place to secure an early foothold.

Compatriot Mitsubishi Chemical boosted its annual U.S. production of carbon fiber for hydrogen tanks by more than 30% in June, switching over production lines that had been used for wind turbine materials at a Wyoming plant.

Meanwhile, Toray is turning its attention to flying vehicles as well. The company announced in July a contract to supply carbon fiber to Germany's Lilium, which is developing an air taxi, and plans to seek other partnerships in the field.

Toray "can establish [flying cars] as a standalone business area starting in 2025," a person familiar with the company's plans said.