Materials group has spread its bets since global financial crisis TOKYO -- Carbon fiber composites are valued for their sturdiness and resistance to extreme temperature. Now, a top supplier of the aircraft body material faces a test of its own resilience to earnings pressure.

Toray, the world leader in synthetic carbon fiber by market share, has been dragged down by falling global demand for aircraft during the coronavirus pandemic.

The Japanese materials group endured similar turbulence during the economic slowdown after the 2008 global financial crisis. But its earnings are arguably more resistant to headwinds now, thanks to two revenue sources beyond the aerospace industry.

Automakers are not Toray's only customers. The company supplies textiles for casualwear brand Uniqlo's Heattech, AIRism and other clothing lines. It also makes separator films for lithium-ion batteries.

Toray's net profit for the fiscal year ended March fell by 23.6 billion yen ($226 million) from a year earlier. This decline comes to 8.6% of total profits over the preceding three years.

By contrast, net profit fell 41.8% in the crisis year to March 2009 compared with the three years before that. The more recent decline is more than 30 percentage points smaller.

By the same measure, Toray's 8.6% decline is narrower than those of its top Japanese rivals, Teijin (14.1%) and Mitsubishi Chemical Holdings (21.5%). A similar comparison based on forecasts for the year ending March 2021 also shows Toray to be stronger against the current downturn than it was during the Great Recession. 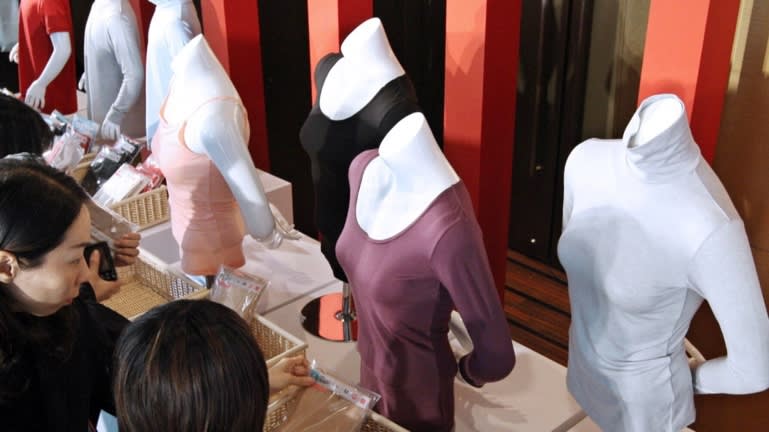 In the current fiscal year, fibers and textiles are forecast to remain profitable at 36 billion yen. Profit in performance chemicals is expected to edge up to 59 billion yen.

Meanwhile, the carbon fiber composites segment generated 20.9 billion yen in profit in fiscal 2019. Thanks to solid demand for such use as tanks for compressed natural gas and wind turbines, the profit was nearly 20% above the figure logged in fiscal 2007, right before the Lehman crisis. But the business is expected to plunge into the red for fiscal 2020 as the pandemic decimates demand for aircrafts.

The company's overall net profit under international accounting standards is expected to plunge 60% on the year to 34 billion yen in fiscal 2020, avoiding a loss thanks to contributions from other businesses.

Light and durable carbon fiber is synonymous with Toray, which controls just below 50% of the global market. It commercialized the material in the 1970s using technology honed in the textile business. It greatly expanded the material's applications through constant improvements and investments.

As Boeing aircrafts widely adopted carbon fiber composites, Toray's carbon fiber business grew to generate 36.1 billion yen in operating profit, or more than 20% of the total in the year ended in March 2016. The company's stock price hit a record high of 1,208 yen in November 2017.

Because of the significant weight the business carries in the company, the stock price reflects its performance. The stock is now in the 500 yen range, down nearly 20% from the pre-coronavirus price.

"Demand for airplanes will likely recover around 2023," one Toray source said, predicting that business travel will recover in light of advances in vaccine development, lifting demand for aircrafts and increasing sales of carbon fibers. But for the immediate future, the prospects remain grim given rapid surges in coronavirus cases in Japan and Europe.

It is imperative for the fibers and textiles segment and the performance chemicals segment to pull their weight until the carbon fiber business can start to recover after the world finally brings the pandemic under control.