KUALA LUMPUR --Malaysia's largest lender Maybank says it is on track to achieve 40% profit outside the country by the end of 2015. 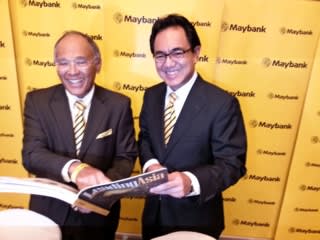 "We do have options that will enable us to succeed in getting 40% earnings outside Malaysia," President Abdul Farid Alias said yesterday at a news conference.

Contributions from its subsidiaries in Indonesia, the Philippines and Singapore made up about 30% of the company's profit before tax as of the end of 2013. Farid said the bank is expected to bring the figure up to 34-35% in two years' time, and the remaining 5% through acquisitions. It does not have a specific companies in mind for buying, but it is looking for opportunities across Southeast Asia.

Maybank is the fourth largest bank by market capitalization in Southeast Asia. The top three banks are all based in Singapore. Maybank owns Indonesia's Bank Internasional Indonesia and Maybank Kim Eng Securities, an investment bank in Singapore. It also has banking operations in more than 15 countries around the world. The bank has recorded double-digit earnings growth for the past four years. It made a net profit of 6.5 billion ringgit ($2.4 billion) on revenue of 33 billion ringgit last year.

Malaysia and its cohorts in the Association of Southeast Asian Nations hope to adopt the Asean Economic Community in 2015. The new bloc would enhance connectivity in trade by liberalizing goods, services, investment, labor and the movement of capital.