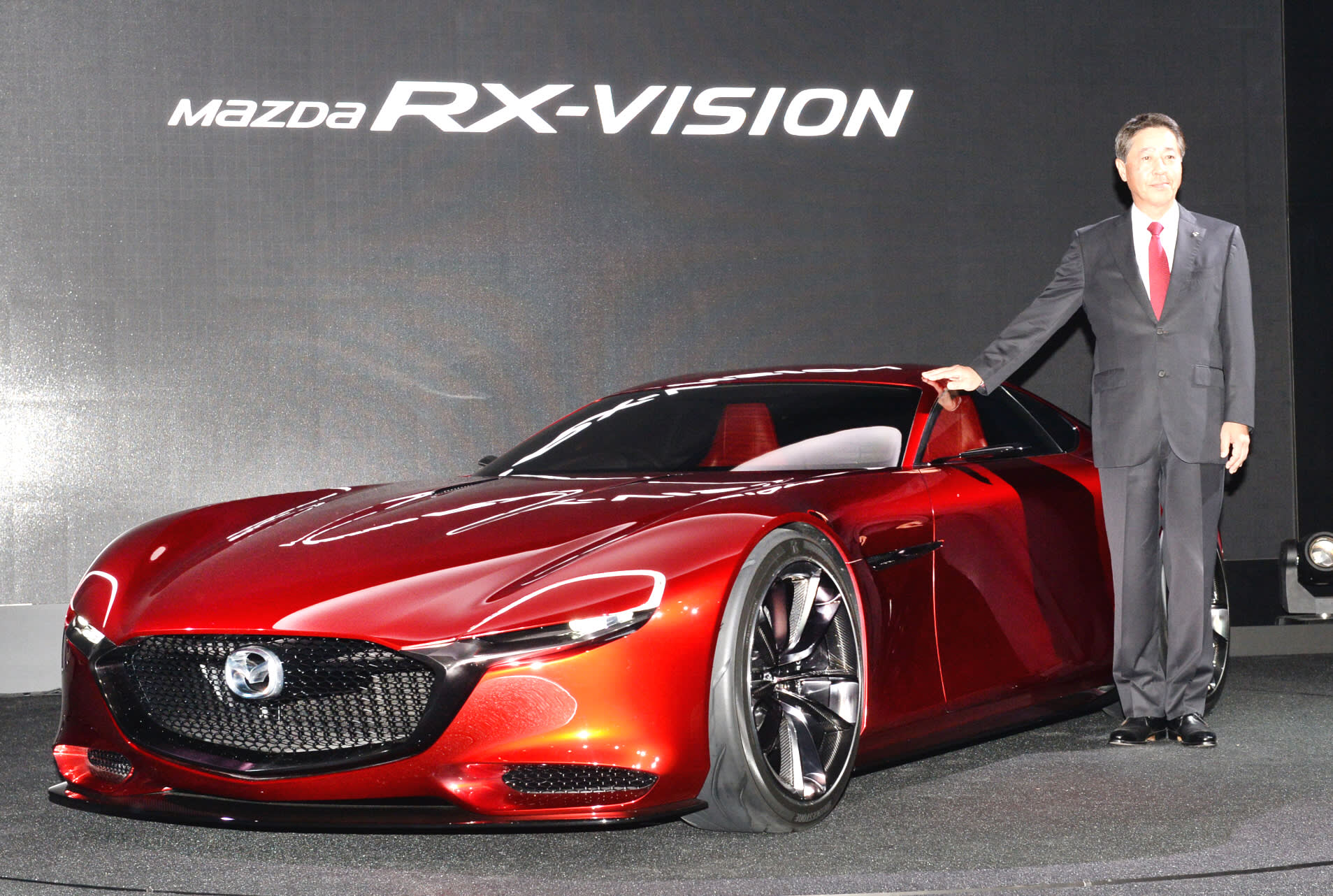 TOKYO -- The rotary engine may make a comeback at Mazda Motor after the Japanese automaker stopped making the engine in 2012. Auto enthusiasts and Mazda engineers are all geared up to celebrate the return of the company's signature engine, but others, including management, are still cool to the idea, given the company's checkered past despite a strong financial position in recent years.

"We gave form to our dream for the future," Mazda President Masamichi Kogai said at the Tokyo Motor Show on Oct. 28 last year as he unveiled the RX-Vision concept car equipped with a rotary engine. The flat, streamlined design, modeled on a cheetah, was possible only with a rotary engine. "It is the ultimate styling for a front-engine, rear-wheel drive sports car," he said.

Mazda fans gave high marks to the concept car. "When I was a student, I longed to buy [Mazda's RE-equipped] Savanna but I couldn't afford it. So I'll definitely buy this one," a 63-year-old company executive said at the event. Another Mazda fan, a 35-year-old businessman who sat on the floor gazing at the car, said: "The RE is special. I want to test-drive it if a new RE model comes out." The car received over 20,000 "likes" on Facebook overnight after it was unveiled. A rotary engine is smaller, but has more power and generates less vibration than conventional reciprocating engines.

Mazda engineers are also eager to revive the engine. Kiyoshi Fujiwara, a managing executive officer who is in charge of research and development, is confident that "The path to overcoming technical hurdles is almost clear." The company will soon be able to find technical solutions to fundamental rotary engine-specific problems, such as environmental issues and poor durability due to the structure of the engine.

Kogai, however, remains cautious. He emphasized that restructuring is not complete and said he will "tackle it in order to build a solid business foundation." He also told journalists at the exhibition that he does "not know yet" whether he plans to commercialize the concept car or not.

Mazda has been upbeat financially. In the six months to September, it posted 125.9 billion yen ($1.03 billion) in group operating profit, up 21% on the year and a record for the period, thanks partly to record sales of 764,000 units. Sales were boosted by the popularity of its Skyactiv green technology and unique designs. "Mazda's strategy to pursue technological perfection hit the mark," said Kenji Hanawa, head of the economic and industrial research department of the Development Bank of Japan. "Now Mazda has no blind spots," he added.

But the lustrous performances are a far cry from a near-death experience just five years ago. The automaker suffered a sharp drop in sales after the collapse of U.S. brokerage Lehman Brothers in 2008. In 2009, it raised some 100 billion yen through public share offerings, but was forced to raise an additional 170 billion yen in 2012 following the yen's appreciation in the aftermath of the Japan's catastrophic 2011 earthquake and tsunami.

"Mazda is not a financially stable company yet," one executive said. Developing a new model generally costs tens of billions of yen. A new rotary engine model means a second sports car in Mazda's current lineup alongside the Roadster. That seems out of step with the shrinking sports car market amid a boom in the popularity of eco-friendly cars. "The high expectations are understandable, but we can't do things that are unprofitable," the executive said.

Car dealers are not so enthusiastic either. "There goes the bad Mazda again," said an executive at a major dealership, referring to the automaker's repeated cycle of good earnings, investment expansion and then troubles.

In 1967, Mazda introduced the Cosmo Sport, the world's first mass-produced rotary engine vehicle. People praised the high-power, low-vibration driving, and Mazda expanded its rotary engine lineup to include even a microbus. But the boom ended in 1973 with the oil crisis as people turned their back on gas-guzzling rotary engine vehicles, hurting Mazda's finances. The company survived with the Familia, a small, family car that was a hit. But the company then struggled with overinvestment due to an overstretched dealership network during Japan's bubble economy in the late 1980s to early 1990s. Mazda eventually sought help from U.S. auto giant Ford Motor.

The dealership executive explained, "The rotary engine has its supporters, but it doesn't meet a majority of consumers' needs." The last rotary engine model, the RX-8, produced until 2012, did not sell well in part because of tougher environmental regulations and the growing popularity of greener vehicles. Moreover, rotary engine vehicles are not designed to be big hits in the first place. So, why bring it back? One answer is the fact that the driving technology Mazda has been developing, with its roots in the rotary engine, has shaped the automaker's brand.

Unlike other eco-friendly cars, Mazda vehicles are chosen by people who look for both good driving and environmental friendliness. With Skyactiv technology, a comprehensive approach to developing engines, gears, chassis and other parts, Mazda improved fuel efficiency without resorting to hybrid technologies. The Demio compact car, for instance, has a mileage of 24.6km per liter of gasoline. The average mileage of all Mazda models has improved over 30% compared with 2008.

The second-generation Skyactiv models, now in the works, use a self-ignition system, called Homogeneous Charge Compression Ignition, instead of a spark plug. They will be the world's first commercial vehicles using the technology. The new rotary engine, to be dubbed Skyactiv R, faces challenges to meet tough environmental regulations. If pulled off successfully, it would be a symbol of Mazda's technology prowess and boost the brand further.

However, technology-driven management is a double-edged sword. While Skyactiv might have been a huge success, it could lead to overspecification and increased costs if things go awry. Even if the new rotary engine model clears all the hurdles, whether to commercialize it is a difficult question for the company's management .

"Having no [net] debt is one factor," said a Mazda executive about the decision over the commercialization of the new rotary engine model. Mazda has reduced its net liabilities with interest from about 370 billion yen in March 2011 to some 170 billion yen in March 2015, and it expects to become a no net-debt company in March 2017. In that year, the company celebrates the 50th anniversary of the introduction of its first rotary engine vehicle. The allure of this technology presents a test for Mazda.