McDonald's lovin' it in Japan as consumers forget scandals 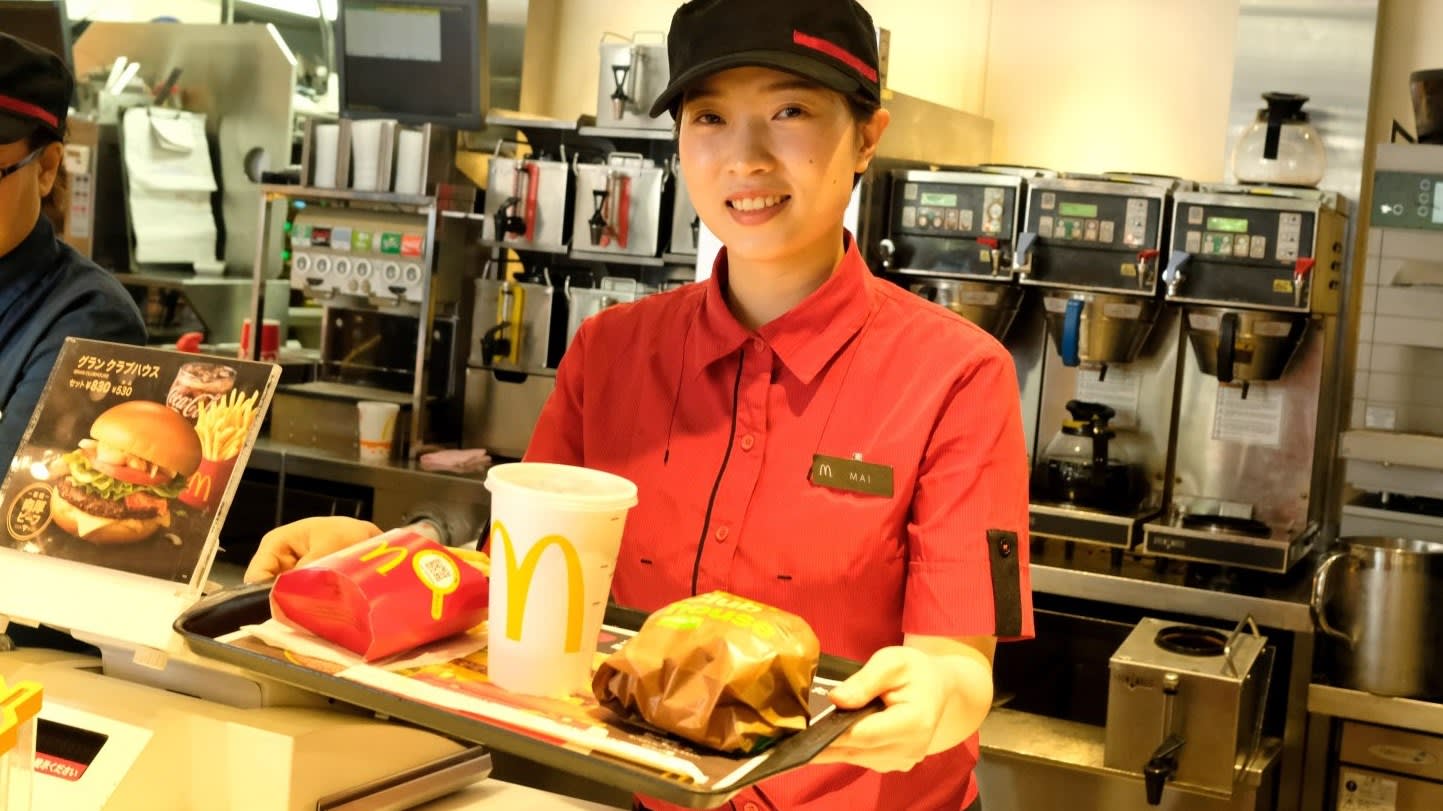 A McDonald's in Tokyo's Shibuya district

TOKYO -- Roughly three years removed from the worst crisis in its history, McDonald's Holdings (Japan) is cooking up some impressive earnings figures.

The company is projecting a record 20 billion yen ($180 million) in net profit for the current year through December. Only two years ago, it experienced a crushing loss of 34.9 billion yen after it was rocked by a series of food safety scandals.

Granted, widespread closures of unprofitable outlets have a lot to do with the turnaround. But the question is, have consumers finally forgiven the fast-food chain for selling chicken nuggets made with expired meat, and for serving up items containing plastic and even a fragment of a human tooth? To find out, The Nikkei Marketing Journal and marketing research outfit Monitas asked 1,000 consumers if, when and why they returned to the burger chain. 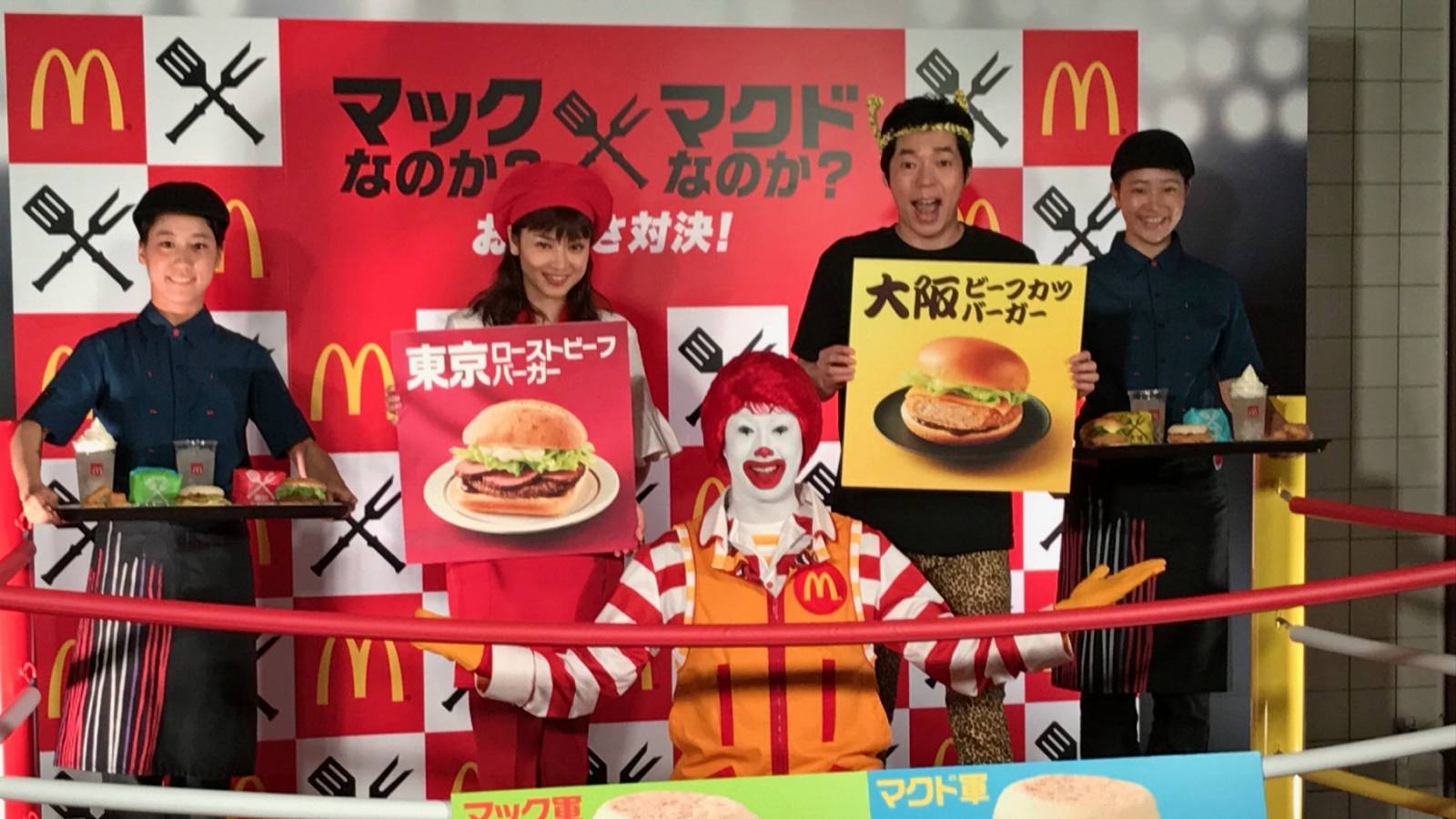 Of the 1,000 survey respondents, 32% said they stopped eating at McDonald's after the scandals, while 33% said they cut down on their visits. The harshest critics were mothers with young children. Of women in their 40s, some 41% said they abandoned the chain.

President Sarah Casanova faced an uphill battle when, following the chicken scandal in summer 2014, she pledged to restore consumer confidence over the next three years.

Sure enough, in 2014, the company upgraded its webpage dedicated to information on food safety. It switched chicken suppliers and, in 2015, launched a special app that lets customers lodge complaints.

The study suggests the safety reforms are only part of the story.

Of respondents who said they have returned to McDonald's, 28.1% -- the biggest proportion -- said memories of the scandals had simply "faded." A 28-year-old woman noted that "the company talks of its efforts to ensure food safety, but they're not always visible to consumers."

Meanwhile, 27.4% said they returned because their "concerns about food safety have gone away." 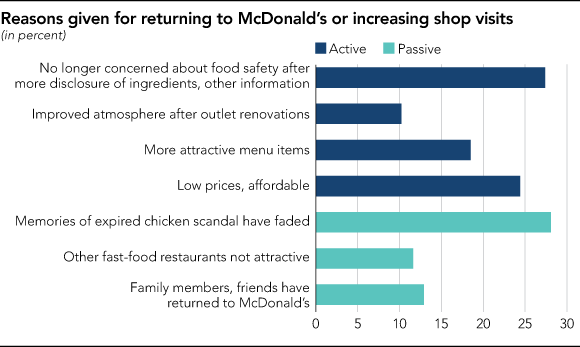 For one 36-year-old Tokyo man, the shock of the scandals has worn off. "Today, we often hear news reports about McDonald's new products and improved earnings so, to be honest, the food safety scandals don't come to mind that much anymore," he said.

Before the controversy, he had eaten at McDonald's four or five times a month. The safety fears changed that, and he would take his family to other fast-food restaurants like Subway and First Kitchen instead. But around this spring, he started frequenting McDonald's again.

The way customers have trickled back over time supports the notion that those memories are vanishing -- with fresh promotional campaigns also helping to relegate the scandals to the past.

Of the respondents, 27% said they returned by summer 2016, while 40% said they were back by spring 2017, around the time the chain launched its Gran series of large hamburgers. A busy McDonald's in Tokyo

A 43-year-old mother of two in Tokyo said she "started feeling like returning to McDonald's after seeing a collaborative campaign with 'Pokemon Go' and a nickname contest," referring to a recent "referendum" that invited customers to choose a nickname for the chain. A 29-year-old businesswoman in Tokyo with a sixth-grader said she returned to McDonald's because "the shops are fancier and cleaner after renovations."

McDonald's drastically refurbished some 1,000 outlets, or about a third of its existing shops, between 2015 and 2016. It also took other steps to improve the in-store experience, such as shortening wait times after ordering.

But renovations did not help that much -- only 10% of returning respondents cited them as a reason.

A bigger reason people started to come back was simply because their friends and family started to do so.

"I thought is was OK to go back because everybody else was doing so," said a 23-year old woman in Saitama Prefecture. Kana Kakiuchi, a 22-year-old resident of Ibaraki Prefecture agreed, saying she "started to go to McDonald's again when I saw many friends tweet from McDonald's stores."

The change in consumer attitudes really began with customers in their 20s, rather than families: 55.8% of respondents in the age group said they were already back at McDonald's by winter 2016, topping the overall figure by 20 percentage points. This may have something to do with how much younger generations use social media, and how they tend to be influenced by their peers.

McDonald's also had a stroke of luck, in that its rival chains could not capitalize on the golden opportunity. "It isn't so much about food safety. I just go to McDonald's because it is better than other fast-food restaurants," said a 23-year-old woman working in the capital, explaining her rationale for returning. Her view was shared by 11.6% of the respondents.

Fast-food purveyors like Burger King and Mos Burger did see some customer migration after the scandals, but the shift proved temporary. As a representative of one rival put it: "We couldn't score big while McDonald's was suffering."