There are a number of performances involving the Gundam statue at a newly opened attraction in Yokohama, southwest of Tokyo. (Photo by Ken Kobayashi)   © SOTSU/SUNRISE
NANA SHIBATA, Nikkei staff writerDecember 19, 2020 19:33 JST | Japan
CopyCopied

YOKOHAMA, Japan -- An 18-meter kinetic statue of Gundam, a famous anime robot, was revealed to the public at the Gundam Factory Yokohama complex southwest of Tokyo on Saturday.

Hundreds of people lined up outside the complex to see the giant robot before the opening at 10 a.m. Some fans had face masks emblazoned with pictures of Gundam, others dressed as their favorite characters from the anime series, such as Char Aznable.

"I have been a fan for long and am so excited to see the moving Gundam," said a 53-year-old man waiting in line. The man, who works in construction, added: "It's amazing to see how they build a statue this size."

An American man living in Tokyo came with his wife and son. "Gundam is little known in U.S., but my son loves them."

Japanese toymaker Bandai Namco Holdings is behind the construction of the giant moving statue and is hosting performances at the newly opened attraction. Visitors can view the robot from observation decks 15 meters to 18 meters off the ground for a close-up view of the fictional automaton's head and body.

In addition to the exhibition, the complex hosts Gundam-Lab, where visitors can learn how the kinetic statue works. There is also an attraction that lets people enjoy a "live" operator's-eye view of Gundam using 5G technology. The souvenir shop sells exclusive merchandise and there is a Gundam-themed cafe.

The full-scale "Gundam taught me that the shape of the human body is more wonderful than ever," said Yoshiyuki Tomino, director of the anime series "Mobile Suit Gundam," who is considered the "father of Gundam," at an opening ceremony Friday evening. "This is because this size of humanoids and the color of toys show great things."

The animated TV series, "Mobile Suit Gundam," also known as "First Gundam," originally aired in Japan in 1979. It tells the story of Amuro Ray, who pilots the robot from which the series takes its name, as he struggles and grows through life-or-death battles.

"Mobile Suit Gundam" is set in a distant future where people do battle in huge robots called "mobile suits." Bandai had hoped to attract new fans from around the world to its anime robot, but the coronavirus pandemic has set back its plans. (Photo by Ken Kobayashi)

In addition to Japan, the show is a hit in China and Southeast Asia, where many people are drawn to Japanese popular culture. The program has been broadcast in a number of foreign languages, including English and Chinese. Recently a Gundam event was held in Shanghai in collaboration with Chinese e-commerce leader Alibaba. A similar event took place in Thailand in September.

For the series' 30th anniversary in 2009, Bandai Namco set up a statue at Gundam Base Tokyo, a tourist attraction in the Japanese capital's waterfront district. That statue was as large as the one in Yokohama, but the Yokohama version is the first full-size, moving Gundam.

The new statue is a part of the "Gundam global challenge," Bandai Namco's campaign to build the brand overseas in honor of the 40th anniversary of the series.

"Originally, we were hoping to attract not only domestic fans but also people from all over the world," a company representative told Nikkei Asia. But the coronavirus pandemic set back the company's plans and delayed the opening of the exhibition, which had been scheduled for October.

The exhibition was supposed to coincide with the Tokyo Paralympic Games, which have been postponed to 2021. In an interview with Nikkei last year, Masaru Kawaguchi, president of Bandai Namco, looked forward to the Tokyo 2020 games having a positive impact, saying the company would be able to promote Gundam characters with overseas visitors by taking advantage of the world's biggest sporting event.

The statue will be up until March 2022. The 9,000-sq.-meter site is located at Yokohama Pier, which is a candidate to host an integrated casino resort. The city has invited foreign casino operators to build a resort in the area after Japan legalized casino gambling in 2018. With people spending more time at home due to COVID-19, Bandai Namco is coming out with more Gundam plastic models, called "Gunpla" by enthusiasts, especially overseas. Expansion abroad is part of the company's growth strategy as its fan base in Japan ages.

In the U.S., Bandai Namco has decided to sell Gundam toys at big retailers such as Walmart and Target. Next year the toymaker will put up a full-size Gundam in Shanghai, which the company considers a priority market.

Bandai Namco's plastic models are increasingly popular in foreign markets, with around half the company's sales coming from overseas. Its total shipments have more than quadrupled since fiscal 2006, to 31.26 million units in fiscal 2019.

In response to the rising demand, especially in Asia, the company this month opened a new factory in Shizuoka, southwest of Tokyo, aiming to boost its production capacity by 40%. 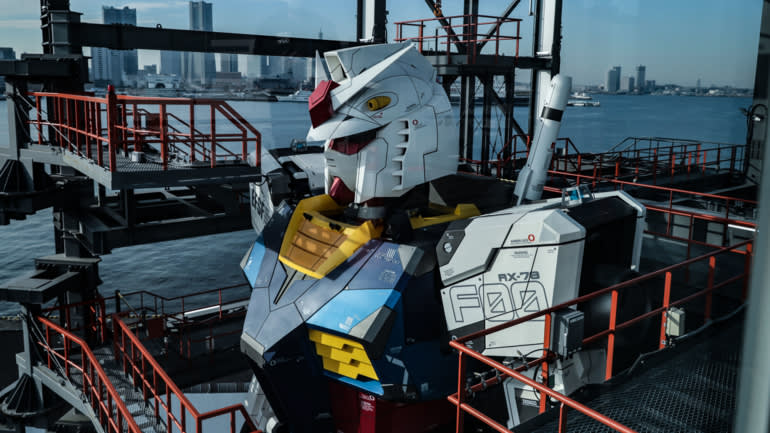 The new Gundam statue in Yokohama is a part of the "Gundam global challenge," Bandai Namco's campaign to build the brand overseas in honor of the 40th anniversary of the series. (Photo by Taro Fujii)