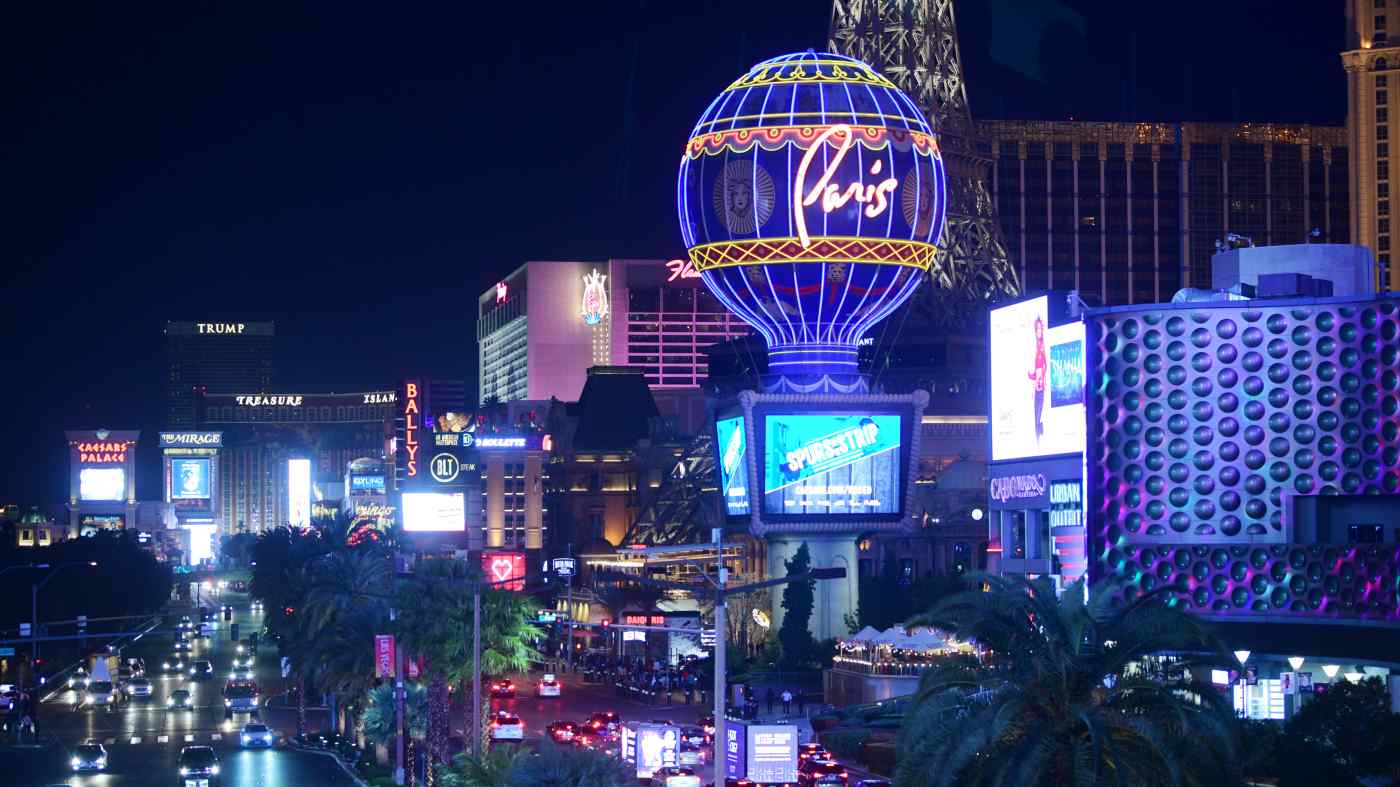 For Japan, the question is which future awaits the locations of its first casinos.

The Japanese government aims to grant up to three casino licenses in or after 2021, hoping to move past a scandal over the arrest of a lawmaker involved in casino policy on suspicion of bribery. Several candidates have entered the race: Osaka Prefecture and the city of Osaka as well as Wakayama Prefecture in the west of the country, along with the city of Yokohama in the east, near Tokyo.

As the bidding heats up, we visited the Eastern Seaboard of the U.S. and the gambling powerhouses of Asia to look at what can go right -- or wrong -- in the business known as integrated resorts.

On a weekday in mid-December, only six of the 800 rooms at the Showboat Atlantic City hotel were occupied. The building towers above the New Jersey coastline, offering panoramas of wild winter seas. But a bellhop, who had little to do besides chat, said that "only about 120 rooms are occupied even on weekends."

"The economy is worse than it was three years ago, when half of the rooms were reserved," he said.

Once, Atlantic City was a prime destination for New Yorkers who wanted a quick getaway spiced up with some blackjack, poker or slots. In 1976, New Jersey became the first state on the East Coast to legalize casino gambling, attracting tourists in droves. But everything changed after the neighboring states of Delaware and New York allowed casinos in the 1990s and 2000s. A relic from Atlantic City's heyday as a popular gambling destination: The U.S. city has struggled to compete with casinos in nearby states. (Photo by Tomoki Mera)

Atlantic City had little to offer other than casinos, which tourists could suddenly find elsewhere. Numerous establishments folded, resulting in waves of job losses. The unemployment rate in the city of about 37,000 people was 4.7% in November 2019, above the national average of 3.5%.

Some residents left. "My friend's mother was working at Trump Plaza, but she moved out of the city when the casino was closed" in 2014, said Dannie Juarez, who works at a local pizza restaurant.

The brutal U.S. casino business may hold lessons for Japan.

Just as Atlantic City was thrust into a battle with neighboring states, Japanese resorts will be up against casinos across Asia. All will be beckoning deep-pocketed Chinese and other high rollers.

Macao stands as one particularly formidable competitor -- though the coronavirus outbreak originating in China forced casinos there to stay shut for weeks. They reopened on Thursday but still face strict health precautions and a sharply reduced inflow of gamblers.

Nevertheless, over the long haul, what is already the world's biggest gambling center by revenue is expected to further benefit from the Chinese government's heavy promotion of the Guangdong-Hong Kong-Macao Greater Bay Area.

Galaxy is spending about 50 billion Hong Kong dollars ($6.4 billion) to expand an integrated resort in Macao to attract MICE -- the hospitality industry's acronym for meetings, incentives, conventions and exhibitions. The company thinks Macao has more potential to lure business travelers, given its proximity to the manufacturing hub of Zhuhai and the information technology center of Shenzhen. Singapore is no slouch, either. It hosts more international conferences than any other Asian city, and officials see MICE as a way to promote other aspects of the economy.

"Business events play an important role in the innovation and startup ecosystem of the country," said Chew Tiong Heng, executive director of infrastructure planning and management at the Singapore Tourism Board. "Singapore is recognized among the leading global cities for startups, and MICE events serve as platforms to gather and connect local and regional startups with investors, governments and global thought leaders."

In spring 2019, the government gave the green light for two separate integrated resort expansions. Las Vegas Sands, the American parent of the Marina Bay Sands, and Genting Singapore, a local developer, will spend a combined 9 billion Singapore dollars ($6.47 billion) to renovate and expand existing facilities in the city-state.

The lesson here is that keeping resorts competitive means continually pumping in cash.

"We keep reinvesting in our properties," said George Tanasijevich, CEO of Marina Bay Sands and Las Vegas Sands' managing director of global development. "We spend hundreds of millions of dollars each year, taking profits that we make from operations."

The chance to build casinos in Japan has drawn big foreign contenders including MGM Resorts International of the U.S., which has expressed interest in an Osaka project. All prospective bidders have pledged to invest around 1 trillion yen ($9.1 billion). But the screening process will scrutinize their wherewithal to continue investing down the line.

The Osaka prefectural and municipal governments are also insisting on a MICE component. Their blueprint for a joint resort project, unveiled in December, requires the operator to build an international conference hall for up to 12,000 people, plus an exhibition center with floor space of at least 100,000 sq. meters.

But Ong Wee Min, Marina Bay Sands' vice president of MICE, said simply building facilities is not enough. For a latecomer like Osaka, part of the challenge will be securing sophisticated technology and high-quality human resources.

Japan's fledgling casino industry will also have to guard against a potential social side effect: gambling addiction. Anti-addiction measures are spreading through the industry. Governments want to promote healthy societies, while resort operators want to protect their reputations.

Singapore is widely regarded as a standard-bearer.

Concerns about addiction had divided Singaporeans on whether to legalize casinos in the first place. In 2005, immediately after it announced plans to allow two integrated resorts, the government set up a National Council on Problem Gambling.

The city's rules include steep casino admission fees for citizens and permanent residents, keeping the business geared to tourists. Casinos must also restrict access to players upon requests by family members, employers or individuals themselves. As of 2018, 25,000 Singaporeans and 320,000 foreign nationals were on the restricted list.

At the Marina Bay Sands, best known for its sweeping surfboard-like rooftop with an infinity pool, every baccarat table has a sign urging customers to "play responsibly." A government hotline for gambling addicts is also displayed. Cameras are installed in the golden arches overhead.

A total of 685 staff members have been trained by a top U.S. addiction expert to keep watch -- not only workers on the casino floor but also security and hotel staff. One dealer said that if he failed to spot and respond to signs of addiction he could lose his job. 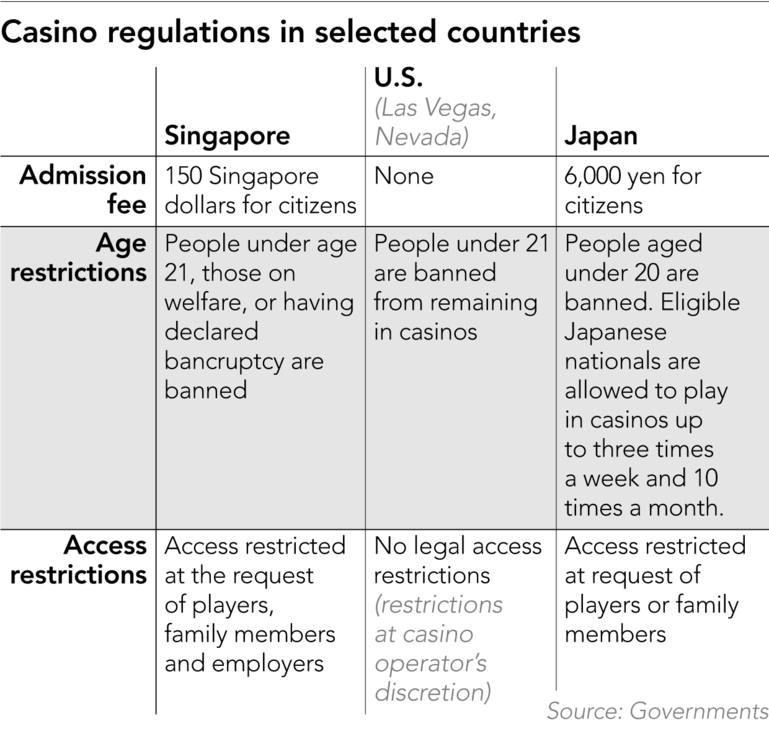 As in Singapore, the Japanese public was split on legalization. But so far, Japan's anti-addiction measures appear less strict.

Admission fees will be 6,000 yen, about half of Singapore's. An official at the Japan Casino Regulatory Commission said there are no plans to allow employers to restrict their workers' access.

Local governments are considering their own safeguards. Wakayama Prefecture, for instance, plans to issue prepaid "IR cards" that would have to be filled to gamble, making it possible to impose limits. In Osaka, resort operators may be required to track gamblers electronically and provide round-the-clock counseling.

With companies due to invest billions and communities counting on an economic boost, the stakes will be high.