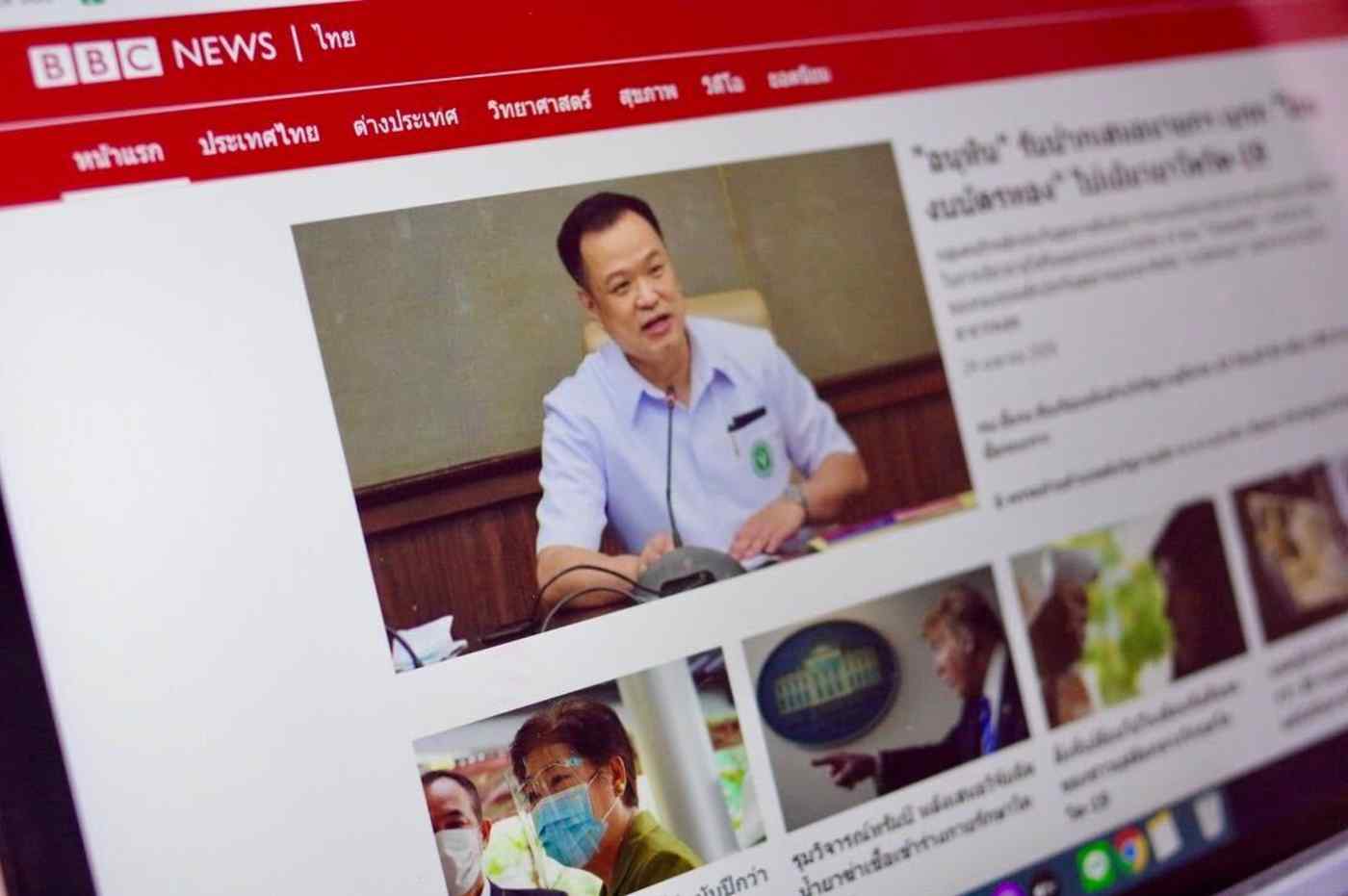 LONDON/BANGKOK -- "We don't want to be the primary source of news, we want to be different," said Nopporn Wong-Anan, a Bangkok Post veteran who heads the BBC Thai Service in London that liaises with a small team in Bangkok. "We try to add to the mainstream media and basically bring an international perspective."

The Thai service is located in an open area labeled "Asia Region" -- one of the BBC's six global partitions. The floor overlooks the largest newsroom in Europe, a high-tech media cauldron that simmers 24-7. Lodged beneath the secure entrance to New Broadcasting House in the heart of London are the subterranean TV studios familiar to all BBC World Service viewers.

The Thai service is one of 41 BBC vernacular services that include pidgin English, and collectively reach nearly 260 million people. Although "content of programs is a matter for the BBC," the Foreign and Commonwealth Office (FCO) states in its annual report that it provides funding in support of "the BBC's mission to bring high quality and impartial news to global audiences, including where free speech is limited."

In 2019, the BBC Thai service reached nearly 57% more people across all its platforms compared to 2018 -- the fourth highest improvement in the World Service.

Recent Thai coverage has been heavy on the COVID-19 pandemic, but also included a detailed report on the largely overlooked catastrophic fires raging in northern Thailand. Chiang Mai's air became the most polluted in the world -- almost twice as acrid as Dhaka and Lahore, the closest contenders.

Queen Elizabeth's address to the nation on April 5 about the pandemic -- only the fifth such talk at an epochal moment in the longest reign in British history -- was given routine coverage in Thai. There have been a number of stories on the Duke and Duchess of Sussex that also cater to Thai interests and raise topical questions about the role of monarchy.

In its 2020 annual press freedom ranking of 180 countries, France-based Reporters Without Borders recently placed Thailand at 140, four places down from 2019. It ranked 65th among 139 countries when the index first appeared in 2002, and now, controversially, is one place behind Myanmar -- which has an even larger BBC following.

The Thai service's robust growth is part of a strong overall upswing. In 2019, the BBC's global reach was 426 million people per week, up 13% year on year. The largest audiences in languages other than English are Arabic, Hausa, Persian, Hindi and Swahili. There are nine vernaculars for India alone -- the BBC's largest overseas growth market ahead of Kenya and the U.S.

A BBC spokesperson told Nikkei that no new vernacular services are planned; the priority is improving existing services. In its World 2020 Programme, the BBC has targeted a worldwide weekly reach of 500 million people by 2022 following a British government investment of 291 million pounds ($359 million) between late 2016 and 2020. This injection funded the largest expansion of the BBC World Service since the 1940s, doubled staffing and added a dozen vernacular services to the 28 already operating.

The Thai service predates this policy shift. It was restored as a "pop-up" Facebook page after the coup in 2014, and consolidated as a website in November 2016. The shortwave service had been controversially stopped in 2006 when BBC officials keen to promote Arabic and Persian services concluded that Thailand should be capable of meeting its own media needs.

"It constantly causes controversy and drives the news agenda, and that's a good thing," a British diplomat sitting in Whitehall at the FCO told Nikkei.

He regards the Thai service as significant soft power, but not as a direct lever of foreign policy. "So is the English Premier League, but we don't control it," he said. "After the coup, it was brought back as an emergency response, and immediately shot up."

The driving force in the 2014 resurrection was Mark Kent, who at that time was regarded as among the most democratically activist of the European Union ambassadors in Bangkok. Kent had previously been ambassador in Hanoi, and was impressed by the work of the BBC Vietnamese Service in a seriously news-starved country. Vietnam ranks 175th on the latest French index, slightly ahead of China and North Korea.

FCO World Service funding was renewed last September until April 2021. That predated a larger debate that heated up again in February about overall BBC funding and the existing license fee system -- which funded the World Service between 2014 and 2016.

Dominic Cummings, a close adviser to Prime Minister Boris Johnson, was reported to be in favor of cutting back the license fees paid by TV owners in the UK for the BBC, and cutting non-commercial subsidization for a large number of domestic news services. Johnson's position was thought to be more nuanced. As a former foreign secretary, he is certainly well aware of the soft power arguments for the World Service. Directly or indirectly, however, it is people in the UK who fund the BBC.

"I think the BBC public service broadcasting model is one widely admired throughout the world, especially in these times when facts and analysis are at a premium," a senior British diplomat told Nikkei. "On the whole, the Thai service did allow the Thai people to have a more accurate picture about what was going on."

Relations with the Thai authorities have sometimes been testy. A profile of King Maha Vajiralongkorn after his accession in 2016 contained nothing that had not appeared in the foreign press, but led to a strong backlash -- probably for being in Thai. "I think a few more edits and tweaks here and there could have kept them out of trouble," a veteran Thai journalist told Nikkei.

A powerful BBC shortwave transmitter employing 45 people was established 150km north of Bangkok in 1996 to replace one in Hong Kong ahead of the territory's handover to China. It was capable of transmitting in 14 languages to 40% of the world's population between the Caspian Sea and Pacific Ocean. The Thai military government's distaste for the BBC's uncowed coverage may have played a part in the arrangement's cancellation in 2017 when the treaty came up for renewal.

Indeed, shortwave has become obsolete in most parts of the world. "Uniquely for our presence around the world, shortwave is practically the only way we can reach our North Korean audience," BBC spokesperson Lala Najafova told Nikkei. "For obvious reasons, we can't measure this audience."

The Thai service has had historic moments. In 1981, the Young Turks -- a group of hot-headed army colonels -- attempted to overthrow the government of Prime Minister Prem Tinsulanonda in the so-called April Fool's Day Coup. The BBC confirmed that Prem was safe with King Bhumibol Adulyadej and Queen Sirikit in Korat, the gateway to northeastern Thailand.

"That turned everything around, and the Young Turks fell away," Somchai Suwanban, who joined the Thai service that year, told Nikkei. "It showed the importance of a neutral, free and accurate news provider."

That esteem was enhanced after the military opened fire on unarmed demonstrators in May 1992, and the unelected former army chief, General Suchinda Kraprayoon, was forced to resign as prime minister. During weeks of political turmoil in the capital, the BBC and other foreign media helped plug the information gap as local media battled intimidation.

Soon after, Thammasat University radio station became the first of some 160 local radio stations to relay BBC programming. "The only requirement was that it was uncut and uncensored," Somchai told Nikkei. "There were no real taboo topics, but we were a little more careful when we dealt with the royal family."

Thailand's domestic media boomed in the 1990s under successive democratic governments, but not everybody saw outside vernacular broadcasters as Cold War relics. The controversial decision to close the influential Thai service was deeply opposed by many, including Derek Tonkin, the British ambassador from 1986 to 1989. His earlier postings in East Germany, Poland and Vietnam would fit him snugly into a John le Carre novel.

"During my time in Bangkok, the ministries were staffed at senior levels by British-educated officials who could listen to the BBC World Service without any fear of misunderstanding, but this is not the case today," he told Nikkei. "My support for the BBC Thai Service, in the past as today, is based on the BBC's well-deserved international reputation for honesty and reliability."