China film industry's recovery from coronavirus off to slow start

NEW YORK/SHANGHAI -- China is cautiously reopening movie theaters after months of lockdowns aimed at combating the coronavirus outbreak, but a full recovery from the pandemic is likely months away and the long-term damage to the film industry -- both financial and creative -- could last far longer.

China's box office was projected to become the largest movie market in the world this year. But the coronavirus outbreak, which not only closed theaters but also disrupted filming, has put over 13,000 Chinese film and television companies out of business, according to Chinese state media CGTN.

"For people who don't know much about our industry, a lot of companies are gone, the rest are suffocating," an industry veteran posted in Chinese on WeChat in June, citing a widely shared article by film industry site Deep Focus. "We're worried that those valuable [perspectives] will no longer be seen, that Chinese filmmakers will stray further and further from the world cinema."

Theaters in mainland China finally reopened in late July, albeit with audience numbers limited to 30% of maximum capacity. For some industry players, even this partial reopening has reignited confidence in the movie industry after six months of inactivity.

"We have restarted negotiations with investors for upcoming projects," said Lim Young Chien, co-founder of Fiction 9, a movie production company in Beijing. In coming months, Fiction 9 will kick off filming two productions, which were stalled due to the coronavirus epidemic.

Similarly, iQIYI International announced on Aug. 6 the making of "The Ferryman: Legend of Nanyang" in Singapore, as part of the on-demand video streaming platform's expansion into Southeast Asia. The company is owned by Nasdaq-listed iQIYI, one of China's largest video streaming players.

However, the reopening does not come without challenges.

Of the more than 10,000 mainland theaters operating before the lockdowns, 6,200 have since reopened, according to Paul Dergarabedian, a senior media analyst at Comscore. Moviegoers have their temperatures taken upon entry and they must wear masks at all times. No food or drink is served inside the theaters, and tickets must be purchased online.

China's box office raked in roughly $23.4 million in the first week of August, about 8% of what the industry saw for the same week in 2019, according to Dergarabedian.

Tank, a film analyst from Chinese market research firm Yiqipaidianying (Chinese for "Let's Make Films"), said it is unlikely the mainland market will heat up in the next month or two.

"The box office in the first week comes as expected. It's not bad, but there's a lack of domestic films in the coming months, and the Chinese films' performance in the first week were bleak," said Tank. "It will be difficult in August and September because the market has not completely recovered."

Tank said China's film industry could be set back by two or three years, but its "upward trajectory will not change" and the local market will eventually return to its "former glory."

Hollywood films such as "Dolittle," "Bloodshot" and "Sonic the Hedgehog," which were released several months ago in the U.S., are among the newer releases being screened in China, and they have occupied top ranks of the country's box office since theaters reopened, according to Chinese movie data site Mtime.

Many older titles are also being re-released, including "Harry Potter and the Philosopher's Stone," which originally came out in 2002.

The lack of new blockbusters has left some Chinese movie fans uninterested in a trip to the theaters.

"I'd rather watch the latest titles on a tablet," said Di Wenhua, a college student in Shanghai, adding that spaced seating arrangements -- another coronavirus countermeasure -- made going to the theater with his friends meaningless.

And low audience numbers, in turn, mean the delay in big releases is only likely to continue.

Fiction 9's Lim said distributors have refrained from introducing blockbusters meant for release during the Lunar Chinese New Year holiday season in January because the ongoing limitations would curb revenue.

"No one will risk screening expensive titles," Lim said.

Lim, like others in the industry, hopes China can maintain the momentum and anticipates the upcoming release of "The Eight Hundred," a China-produced World War II epic, will help fuel enthusiasm among moviegoers. 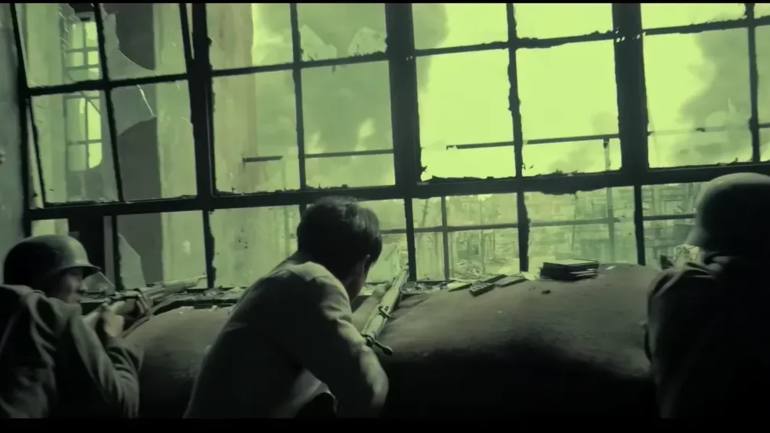 A scene from "The Eight Hundred," a big-budget Chinese war film that is being released in August after a lengthy delay (Screenshot from official trailer)

"As the Aug. 21 release is near the Oct. 1 National Day holiday, when patriotism runs high, we hope the blockbuster will be the harbinger for bigger title releases," Lim said.

"After Oct. 1, domestic films would release as usual, because we do have a lot of films that haven't screened this year," Tank said. "We should have enough films for the next six months."

China box office raked in 50 million yuan ($7.2 million) on Aug. 2, up from 3.5 million yuan when cinemas reopened on July 20, partly fueled by the Shanghai International Film Festival. Still, the figure is a paltry sum compared to last year's average of 176 million yuan per day.

While Chinese production companies hold out for late 2020, the mainland market is up for grabs by Hollywood films -- but this opportunity could prove to be a double-edged sword.

Last week, Disney announced that the highly anticipated live-action film "Mulan" starring Chinese actress Liu Yifei will be released in theaters in China on Sept. 4 and available for streaming on Disney+ for American viewers.

"Hollywood films releasing in China in August and September are beneficial to both the studios and the Chinese market," said Tank. "The mainland needs blockbuster films to warm up the local market, and Hollywood studios need the mainland box office to make up some revenues. But the mainland market cannot be the studios' major source of income. ... They still need to depend on the U.S. box office."

But some U.S. experts worry that with most American theaters still closed, Hollywood's increasing dependency on China will leave studios even more susceptible to Beijing's censorship pressure.

"This is a moment where these issues will only come to the forefront even more. ... We're seeing the Chinese market actually moving even more toward a very strongly government-controlled landscape," said Aynne Kokas, author of "Hollywood Made in China" and a media studies professor at the University of Virginia. "We're seeing that the partners that Hollywood studios may have domestically within China are much more conservative than they would have been even four or five years ago."

Kokas also said that a lot of voices have been silenced in China during the pandemic because only studios with "tremendous government backing or corporate backing from firms that are very close to the censorship mechanism" were able to continue working throughout the lengthy shutdown.

This means that Hollywood studios, who depend on the mainland market for a chunk of their revenue, may be forced by financial necessity to comply with Beijing's increasingly strict red lines.

Such concerns are echoed domestically as well. A Chinese article circling on WeChat last week called out China's increasing censorship, citing recent examples such as blurring out tattoos on celebrities and taking down a cartoon show because the girls' skirts were too short. The article has since been taken down by WeChat administrators because it "violates regulations."

With films and scripted television shows struggling for release, reality shows that aim for quick laughs have popped up to fill the void.

"We're worried indeed, that the perspectives that are not pleasing enough or popular enough, will vanish in the huge waves of homogeneous [cash-railing] trends," the industry veteran on WeChat said. "We've acquired phony emotions, but lost true aesthetics."