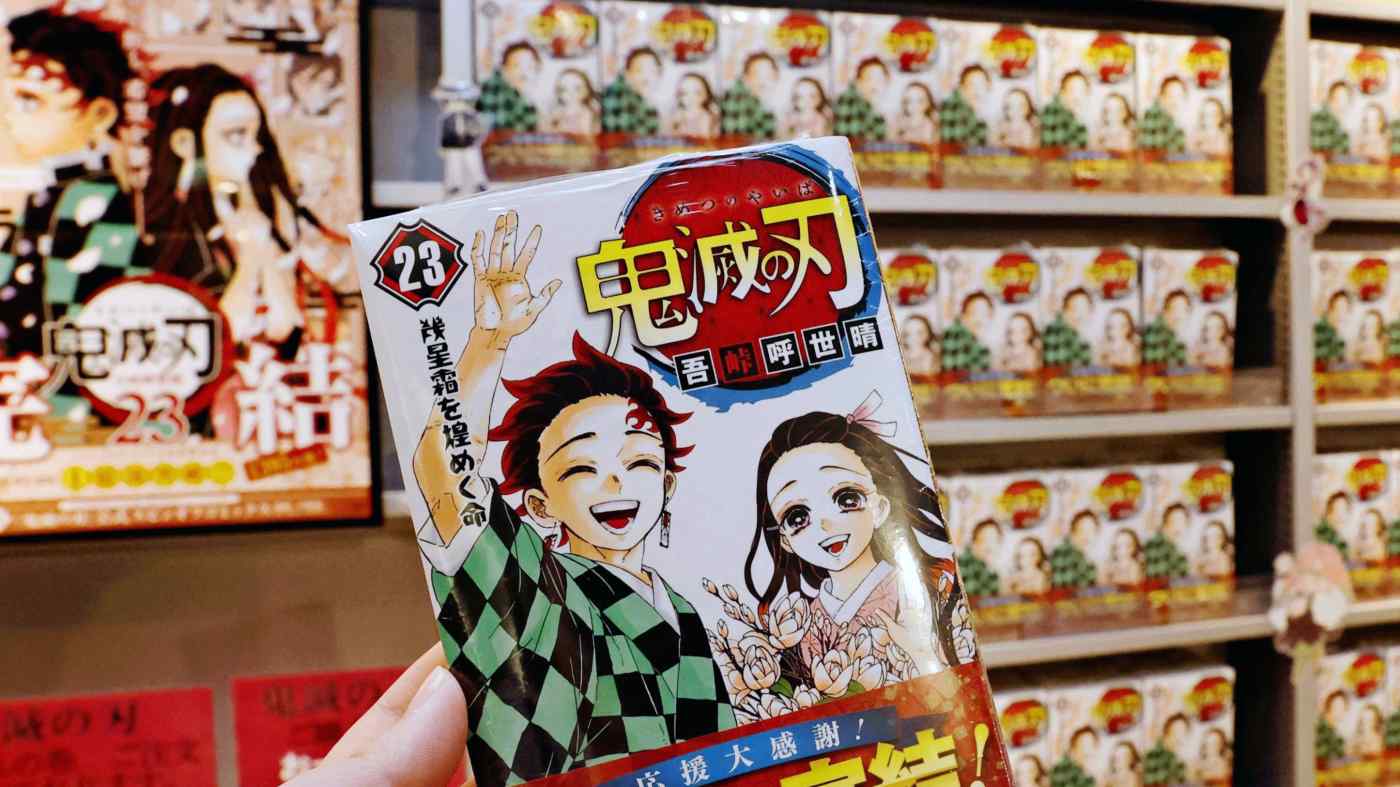 Although the final book of the "Demon Slayer" serial hit bookstores in Japan on Dec. 4, the ripple effects it is having on the country's economy are expected to keep going strong.   © Kyodo
DAIKI HIRAOKA, CHIE MATSUMOTO and BENKEI KURODA, Nikkei staff writersDecember 5, 2020 15:32 JST | Japan
CopyCopied

TOKYO -- "Demon Slayer" keeps booming, arousing expectations that what began as a manga series will create 200 billion yen ($1.92 billion) or more in economic effects in Japan.

More than 120 million paper and digital copies of the entire series have been published, and a feature-length anime is on its way to setting a box office record. Collaborative products turned out by food and other consumer goods makers keep selling strongly, stimulating consumption dampened by the spread of the coronavirus.

With the boom likely to continue for some time to come, more tie-ins are expected to be released.

"I've enjoyed the story because it has been well balanced throughout the entire series," a 24-year-old female company employee said as she bought the last volume of the series, released on Friday.

The serialized manga -- known as "Kimetsu no Yaiba" in Japanese -- in Shueisha's Weekly Shonen Jump magazine tells the story of Tanjiro Kamado, a teenage boy on a quest to restore the humanity of his sister, who was turned into a demon by Muzan Kibutsuji, the story's main antagonist, whose attack killed the rest of Tanjiro's family.

The cumulative number of published copies topped 40 million when the 19th volume of the series hit stores in February. When each of the remaining four volumes was released, the publisher did print runs of 20 million for each.

According to the research arm of the All Japan Magazine and Book Publishers' and Editors' Association, the accumulated number of published copies has exceeded 100 million for only nine manga series, including "Dragon Ball," "Naruto," "One Piece" and "Slam Dunk."

For "Demon Slayer," which has created a rare boom in the manga market, each of its 23 volumes has ranked high in monthly sales.

The movie, released in October, is closing in on breaking a record itself. By Nov. 29, "Demon Slayer: Mugen Train," had topped 27.5 billion yen in revenue, exceeding the 26.2 billion yen generated by Japan No. 2 "Titanic," the 1997 Hollywood blockbuster. "Mugen Train" is now closing in on No. 1 "Sen to Chihiro no Kamikakushi (Spirited Away)," which generated 30.8 billion yen in box office revenue. A collection of full-page ads that ran in Japanese dailies on Dec. 4 captured the attention of social media users. (Photo by Rie Ishii)

The huge success of the feature film can be attributed to Aniplex, a Tokyo-based production and distribution subsidiary of Sony that began to air a teaser TV series on Tokyo MX, an independent television station, then put it on video streaming sites less than a week later. The dual approach has increased opportunities for consumers to encounter the title and characters. It also stimulated viewing demand among people chased inside by the COVID-19 crisis.

Aniplex entered into other collaborations as well. Lawson, the leading convenience chain operator, in October released 50 kinds of onigiri rice balls flavored to match the images of characters in the movie, selling more than 10 million rice balls in the first 10 days. Sales from the campaign reached 5 billion yen in mid-November.

Beverage maker DyDo Drinco has expanded a sales plan for canned coffee products featuring Demon Slayer graphics, by 15 million cans. The Osaka-based company, which would not break down its total sales, said it sold more than 50 million cans of coffee in the first three weeks after releasing the Demon Slayer themes in October. In the year through January, canned coffee collabs are expected to equal more than 10% of all coffee products sold the previous year.

Asked if the boom will continue after the end of the series, Fumio Kurokawa, a media content expert, said, "The hit will continue," noting that the number of new content products is smaller than usual as a result of the virus.

In the film industry in particular, "there are few rivals" as Hollywood battles delays and other COVID crises, Kurokawa said.

The Demon Slayer boom, it appears, is here to stay, and the story's gravitational pull will be too much for prospective collaboration partners to resist.

Yuto Miyawaki in Tokyo contributed to this report.