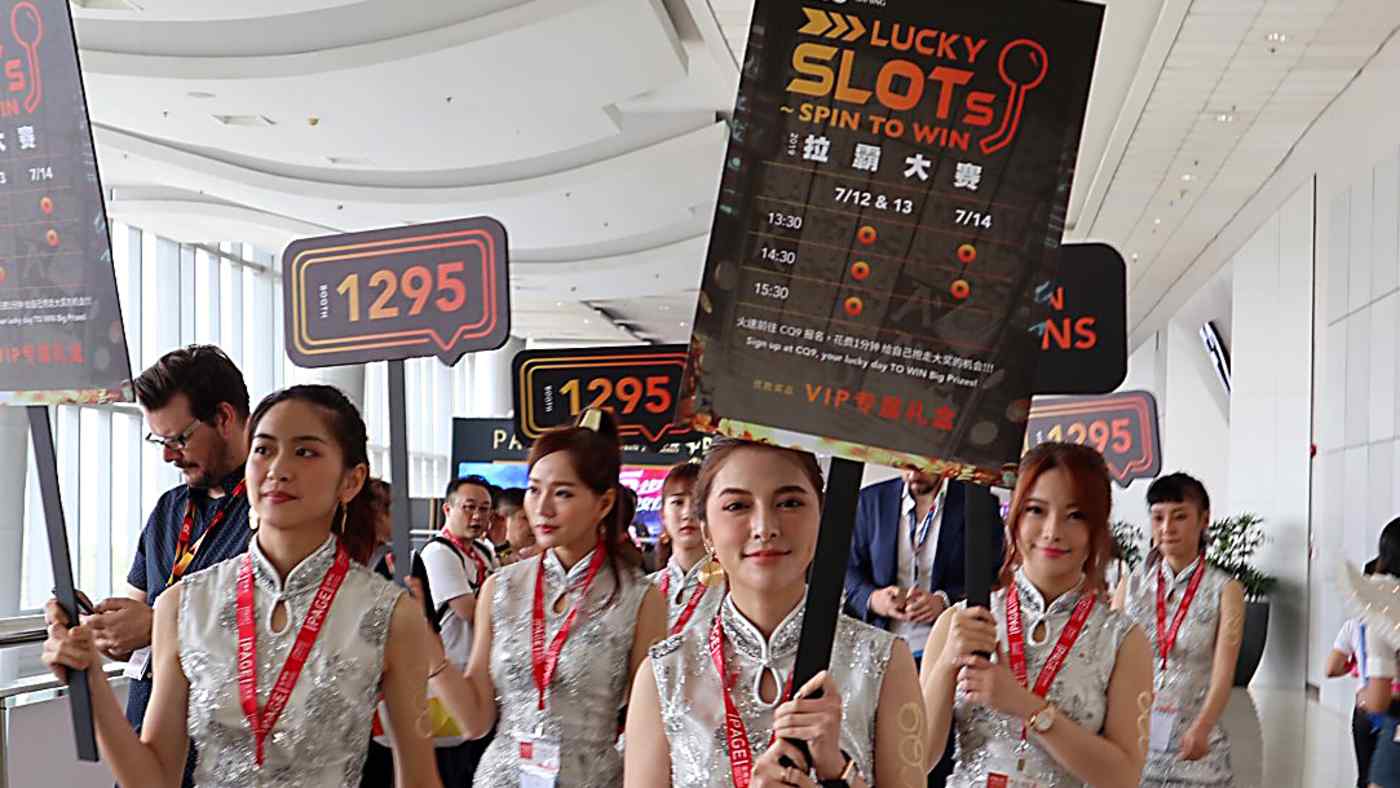 Welcome to the coming-out party earlier this month for the Philippines' offshore gaming industry.

Operating in a legal gray area until three years ago, offshore gaming has since been embraced by the administration of Rodrigo Duterte -- the president who once said he "hates" gambling and on Friday suspended lottery operations in the country due to "massive corruption."

Now, offshore gaming is one of the economy's fastest-growing sectors, employing over 350,000 people, including around 100,000 mainly Chinese foreign workers, according to estimates.

"Here we are at the Phil-Asian Gaming Expo," said Andrea Domingo, chairwoman of the state regulator Philippine Amusement and Gaming Corporation, as she formally opened the event. "For the first time, Philippine offshore gaming operators, suppliers and licensees are all here," she said. "No more [the] illegal gambling capital of the world."

Backed by exploding demand for online gaming from mainland China -- where gambling is officially illegal -- the 56 licensed Philippine offshore gaming operators, or POGOs, are expected to rake in over $8 billion in revenue this year, nearly double what the country's brick-and-mortar casinos, including the four flagship integrated resorts, took in last year.

The online gaming boom is attracting locally listed companies. Gaming technology company DFNN Inc. announced on July 17 that it had set up its own offshore gaming subsidiary, Nico Bayan.

In the first half of the year, online casinos accounted for 36% of business tenant space, just behind outsourcing companies at 37%, said CEO David Leechiu.

"BPOs take nine months to do a lease, POGOs nine minutes," said Leechiu. "Without POGOs, this market would have crashed."

Surging gaming revenues also helped pour $313 million into Philippine government coffers in the first half of this year. That earned special acclaim on July 22 from the ostensibly anti-gambling Duterte, who in his state-of-the-nation address to Congress jokingly called on Domingo to "entice more gamblers, ma'am."

With 200 companies from 15 countries specializing in online games, e-payment and information technology in attendance, Domingo said the expo demonstrated that the Philippines is now a serious rival to Cambodia as a destination for online gaming.

"We don't want to brag, and we are just going to work hard and attract as many legitimate operations as possible," Domingo told reporters. 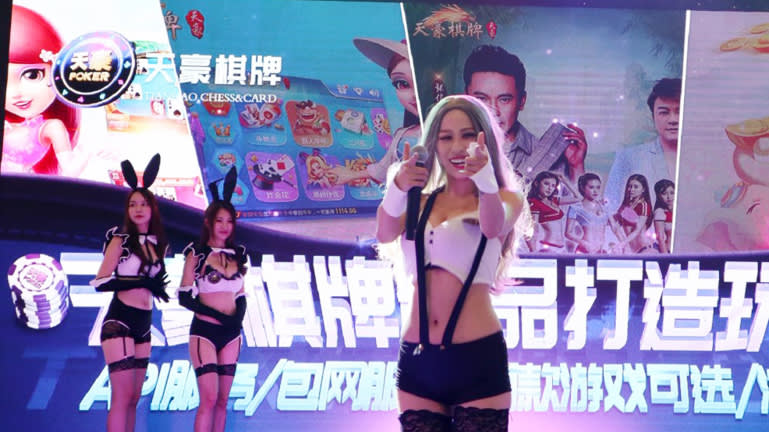 Offshore gaming is one of the Philippines' fastest growing sectors, employing around 350,000 people. (Photo by Cliff Venzon)

The Philippines now offers a wide range of online gaming, from typical card games to computer generated esports such as horse racing and football. Those wanting a more intimate experience can enter online casinos staffed by real card dealers -- mostly women dressed in corsets -- who happily chat with clients as they wager remotely.

Most foreigners access the games via mobile devices, with bets and winnings funneled into online bank accounts or mobile payment apps.

But with few available details surrounding the POGOs -- not even the names of licensees behind each operator are publicly known -- the rapid rise of the offshore gaming industry is also stirring fears that it could turn Manila into a money laundering hub.

"With the way developments in the industry are unfolding, we fear that we are becoming the Sin City of China, with very little benefit to Filipinos and our economy," said Senator Joel Villanueva, who led a probe on the influx of foreign workers. The senator has expressed his suspicions surrounding the industry's frothy growth projections.

"What worries me is if we can't even tax them properly, how can we assure the public that these POGOs are not being used for illegal activities like money laundering?" Villanueva said, urging the Anti-Money Laundering Council to closely monitor money flowing through the sector.

One study published earlier this month by the United Nations Office on Drugs and Crime estimated that Southeast Asia's drug gangs are making up to $60 billion a year pumping out record amounts of methamphetamine, then laundering profits through the region's burgeoning gaming outlets. 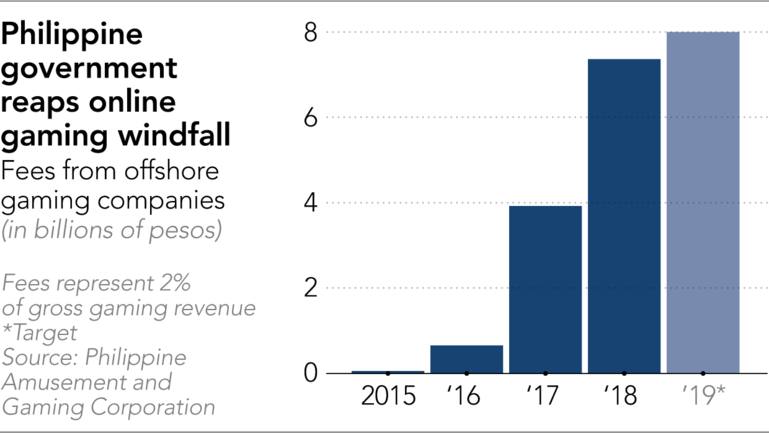 Information gathered by Nikkei about the 56 gaming operators named by regulator PAGCOR on its website found that only seven maintained corporate websites. It also showed that many were registered overseas, including the Isle of Man, Malta and the British Virgin Islands, all secretive tax havens.

While the massive influx of Chinese workers is likely to have a positive impact on the local economy, there are also potential security repercussions, said Rommel Banlaoi, president of the Philippine Association for Chinese Studies.

"The influx of Chinese nationals to the Philippines has also led to an increase in criminalization associated with Chinese migration," Banlaoi said at a public lecture on July 13, adding that he had concerns surrounding the trafficking of humans and drugs.

The influx of Chinese has also angered some locals, who resent that jobs are being taken by foreigners. Frequent raids conducted by immigration authorities on POGO offices have also tainted the industry.

But regulator PAGCOR argues that large numbers of native Mandarin speakers are needed because so many of the gamblers are Chinese.

PAGCOR views the recently approved government plan to grant online gaming companies five-year licenses if they set up in "POGO hubs" -- areas dedicated to online casino operations -- as one way to ease social tensions and help regulate the industry.

Oriental Group, one of the country's largest offshore gaming operators with 20,000 employees, is building two hubs in Clark, a former U.S. air base north of Manila, and another in Cavite Province, south of Manila. The 10-hectare hubs will cost around 8 billion pesos each, and will house office and residential towers for up to 10,000 people.

"With all the social tensions we want to put everyone together in a place where we can just work," Kevin Wong, general manager of Oriental Group, told reporters. Wong said his company was also planning to sponsor Mandarin language classes to help employ more locals.

"Everything is still experimental," said PAGCOR's Domingo. "If there are social problems there, we will see how we are going to rotate our personnel so that there will be no unholy alliances."