From Animal Crossing to Demon Slayer: Japan titles roared in 2020 Japanese entertainment enjoyed a year of strong demand, thanks to an increase in homebound consumers following the coronavirus pandemic, with games and anime turning out to be the perfect cure for boredom. (Source photos by Nintendo and Koyoharu Gotouge/Shueisha/Aniplex/ufotable)
JADA NAGUMO, Nikkei staff writerDecember 31, 2020 12:05 JST | Japan
CopyCopied

TOKYO -- The year 2020 saw strong sales for Japanese entertainment products as consumers driven indoors by the coronavirus pandemic found the perfect cure for boredom in video games and anime. And while the rollout of vaccines could prompt more people to venture outside in 2021, analysts expect demand for fresh content to keep growing.

Japanese game makers enjoyed a surge in revenue, most notably Nintendo, which released its smash title Animal Crossing: New Horizons in the relatively early days of the global health crisis in March. Since then, the game has sold over 26 million copies globally while the company's Switch console has experienced a rush of buying.

Its unique settings, which urge players to find amusing activities on a desert island, captured the hearts of many under lockdown and quarantine.

The unprecedented demand has propped up the gaming giant's earnings. In November, Nintendo posted its highest-ever net profit for the first half of the current financial year, a leap of 243%. 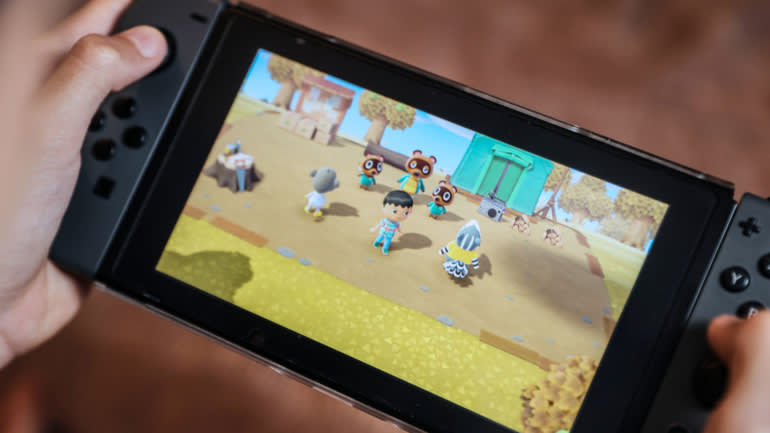 Animal Crossing for the Nintendo Switch has become a global phenomenon. (Photo by Ken Kobayashi)

"As the world entered an era of social distancing, games played a big role in providing people a means to communicate," said Hirokazu Hamamura, the former chief editor of Japanese gaming magazine Famitsu and now a senior adviser to the board at media conglomerate Kadokawa Corporation.

Sales at Sony have also risen on pandemic-induced demand. The company released its much-anticipated next generation gaming console PlayStation 5 in November and is expecting to sell more than 7.6 million units by the end of March 2021. That would surpass the PS4's sales over a similar period after its launch.

Sony's gaming sales were up over 20% in the first six months of the current fiscal year that ends in March, prompting the company to raise its full-year forecast to a 37% jump in net profit to 800 billion yen ($7.6 billion).

Dutch research company Newzoo estimates the global games market has grown nearly 20% to $174 billion in 2020, with the console and mobile game sectors boosted amid the pandemic. "Gaming has been a means for entertainment, escapism, and socializing and interacting with friends/family for many consumers, leading to unprecedented growth for the games market," wrote Newzoo's Tom Wijman.

"Demand for home entertainment, especially games, will continue to be high in 2021," Kadokawa's Hamamura predicts. "Even in the post-coronavirus age, people will prefer playing and communicating online," he said.

Along with video games, 2020 was also a groundbreaking year for anime.

Demon Slayer -- also known as Kimetsu no Yaiba in Japanese -- drew fans from around the world as COVID-19 brought about an increase in audiences for TV and online streaming services like Netflix.

The TV anime, produced by Sony's anime and music production unit Aniplex, is based on a manga comic book series. In October, the film version and sequel to the TV series was released in theaters across Japan. The film had earned over 32.47 billion yen by Dec. 28 and just surpassed anime auteur Hayao Miyazaki's Spirited Away to become Japan's top-grossing film. A poster for the hit anime movie Demon Slayer is seen at a ticket counter at a cinema in Tokyo on Nov. 5. (Photo by Shihoko Nakaoka)

Yusuke Harada, partner at PwC Consulting LLC, said that Japanese anime is unique because "villains are also loved. While American anime tends to have a clear distinction between the hero and the bad guys, a lot of the times that line is blurred in Japanese anime. And that is what draws in fans."

U.S. based market research company Grand View Research estimated in its 2019 report that the global anime market will reach $36 billion by 2025 and register a compound annual growth rate of nearly 9%. According to its analysis, growth will be driven by "the growing popularity and sales of Japanese anime content across the globe apart from Japan." It also said that online streaming services are contributing to the spread of Japanese anime content overseas.

"Japanese anime's predominance lies in the fact that it appeals to a global, yet niche, audience," said Tetsuya Watanabe, consulting manager in the business strategy division of advertising company Dentsu. Watanabe said that many Japanese anime series are based on manga that appeal to otaku, or geeks, with specific cultural obsessions. "These types of anime are only created in Japan and that will likely continue to be the case in the future."

In recent years, popular entertainment content, such as the Marvel movie franchise, has taken the U.S. and other parts of the world by storm.

But Kenji Fukuyama, an analyst at UBS Securities in Tokyo, points out that while the West prefers three-dimensional content, Japan tends to create two-dimensional works. "I think this may be because of Japan's ukiyo-e culture, which embraced 2D art," Fukuyama explains, referring to a style of traditional wood block prints that emerged in the 17th century. "This led to a wide acceptance of anime in Japan, as well as overseas," Fukuyama said.

With hopes now rising that the arrival of vaccines around the world will lead to a normalization of life and a shift away from the indoor isolation that has boosted demand for Japanese entertainment content, companies including Nintendo and Bandai Namco Holdings have accelerated efforts to expand their reach outdoors.

Nintendo is gearing up to open its first Mario-themed park at Universal Studios Japan in the city of Osaka. Super Nintendo World will open in February 2021, with rides featuring famous characters such as Mario and Yoshi.

Bandai opened its Gundam Factory Yokohama complex in December, featuring an 18-meter kinetic statue of the Gundam robot, popularized by the TV anime series Mobile Suit Gundam that originally aired in Japan in 1979.

"More companies are seeking to fuse their online and non-online content in a bid to expand business by strengthening their intellectual property, which is their popular characters," said PwC's Harada.

UBS's Fukuyama agrees that in the post-COVID era the value of real, non-digital entertainment will increase over time. "More entertainment companies are being driven to broaden their use of their intellectual property beyond games and TV anime," he said.