From wickets to walk-offs: MLB seeks to convert India to baseball NEW YORK -- Major League Baseball is mounting a major push to recruit fans in Asia, with India, where cricket is the national pastime, representing the front line in that campaign, a senior MLB official told Nikkei.

"The people in India are familiar with cricket. That's it," Jim Small, senior vice president for the MLB's international business, said in an interview at the league's headquarters in Manhattan. "There is certainly an ability to translate them. The affinity to bat-and-ball sport is important."

The drive to recruit international fans comes at a time when game attendance slumps at home. While the league maintains a loyal TV viewership, fans taking in a game at the stadium were down 1.62% in 2019 after total attendance slipped by about 4% in 2018.

MLB opened regional offices in New Delhi this July. The league plans to dispatch instructional coaches to schools in over 300 Indian cities. It is part of a long-term effort worldwide into which the MLB is investing heavily.

"It's tens of millions of dollars that we invest internationally," Small said. "It has increased in time, and we will continue to increase."

With cricket dominating in popularity, India's baseball community is small. MLB plans to turn that around by hosting events in the country to increase familiarity with the sport. The similarities the sports share -- throwing the ball, hitting the ball and catching the ball -- is crucial to getting fans to cross over.

"I've gone to practices seeing kids brand new to baseball, who are kind of awkward touching the base," Small said. "But they all turn and throw like that," he added, imitating a player winding up to throw "because they have thrown a cricket ball. That's an advantage."

The most effective way of growing the pro baseball fan base in Asia, said Small, is to bring the stadium experience to the people.

"The ability to go, and to have our brains come alive... is really important for the growth of baseball," he said. "We exist literally in a TV. To make a real emotional connection, we have to bring our players there and run these events." 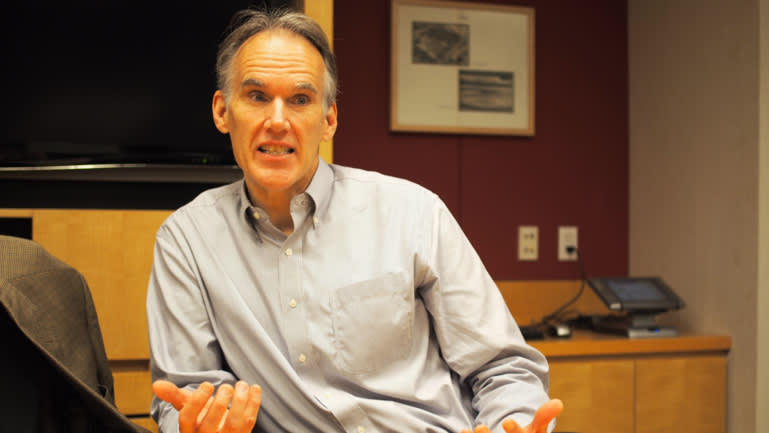 When the first major league regular-season game was held in London this June, the number of people who followed the league's official social media accounts climbed steeply shortly afterward.

Small said the league intends to hold more games abroad, such as the March season opener between the Seattle Mariners and the Oakland Athletics in Tokyo. Capping the two-game series was the emotional retirement speech by the legend Ichiro Suzuki, who played 28 professional seasons in Japan and the U.S., delivered to the capacity crowd at the Tokyo Dome.

Japan is the biggest baseball market outside the U.S. It was there that MLB opened its first international regional offices in 2003. Revenue from Japan, including those from broadcast licensing fees and merchandise sales, increased by nearly 500% in the 15-plus years since, according to Small.

"We are trying to get that same sort of revenue growth in markets around the world."

However, MLB is considering sponsoring baseball camps at Japanese elementary schools due to concerns that children are growing estranged from the sport.

"There is a direct correlation between the popularity of MLB and players from that country playing in the MLB," said Small. MLB is exploring opening development centers in Brazil and Mexico so that it can build up more stars like Ohtani. "Having more players like him is very important," said Small.

In September, MLB teamed up with Japan's Nippon Telegraph and Telephone to broadcast live pro games in 4K. Multiple cameras installed in Tropicana Field in Florida filmed an October postseason game between the Houston Astros and Tampa Bay Rays. The footage and the lifelike atmosphere was relayed to an audience in New Jersey watching on wide screens.

The technology, called "Ultra Reality Viewing," will allow MLB to capture fans around the world who do not have the opportunity to see games in American stadiums, Small said. "NTT brings us a very unique opportunity for us. Cutting-edge technology can help us grow."