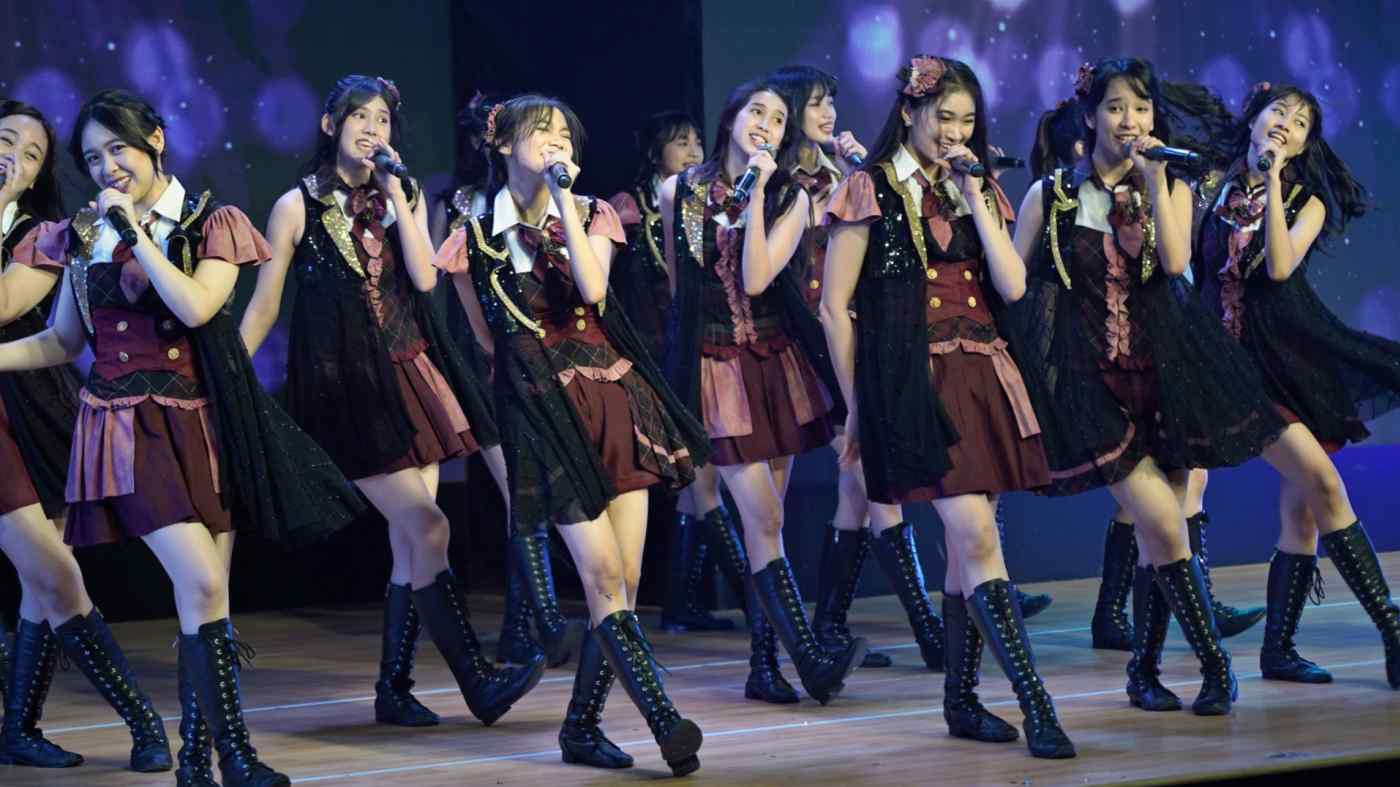 Based in Jakarta, the affiliate of Japan's popular AKB48 unit used to be less than eager to ramp up its online presence because it was created on the "idols you can meet" concept, the business model that has driven the growth of the now multinational AKB group for many years.

JKT48's new approach was on display on the evening of Oct. 22, when the group's 16-member Team K started a live performance at the JKT48 Theater, the group's dedicated venue in Senayan, the capital's business district. The team launched the vivacious performance by shouting "Selamat malam, semuanya!" ("Good evening, everybody!") in unison and then for two hours sang and danced with their usual crisp cheerfulness, often smiling to the cameras at the center and sides of the theater.

But there were no fans to cheer them in the 330-capacity theater. The displays of computers used by staff members to support and coordinate their actions gleamed brightly in the darkness.

Since March, when the first confirmed case of infection was reported in Indonesia, the new coronavirus has kept ravaging the country, killing over 15,000 out of the 480,000 people who have caught it. Both the number of confirmed COVID-19 cases and the deaths are the highest in Southeast Asia. 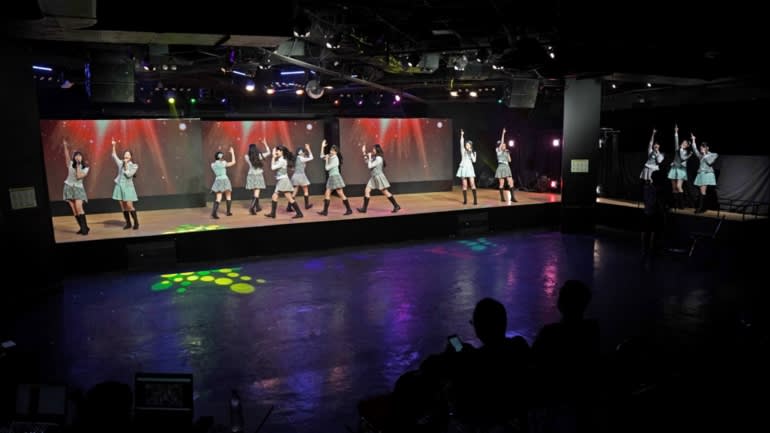 JKT48 performed in an empty theater for a live online show in late October. (Photo by Dimas Ardian)

The nation's provincial governments started imposing strict restrictions on economic and social activities in April, closing commercial facilities including shops, bars, restaurants and theaters. JKT48 has been forced to suspend its live performances.

JKT48 was formed in 2011 as the first overseas affiliate of AKB48, a hugely successful idol conglomerate with many local franchises. Like AKB48, the Indonesian sister group performs songs produced by songwriter Yasushi Akimoto and bases its operations in a relatively small theater of its own. The Jakarta-based group has grown into a big-time musical act with nationwide popularity through live performances and TV appearances. Some fans are not even aware of the group's conceptual origins in Japan.

For years, JKT48 only sang Indonesian versions of AKB songs. It released its first original song, "Rapsodi," in January. Shortly after the song stormed to the top of the charts in the country, however, the pandemic struck, leaving the members jobless for a while. Shani Indira Natio, 22, the most popular member, says she spent time learning how to cook at home during that period. 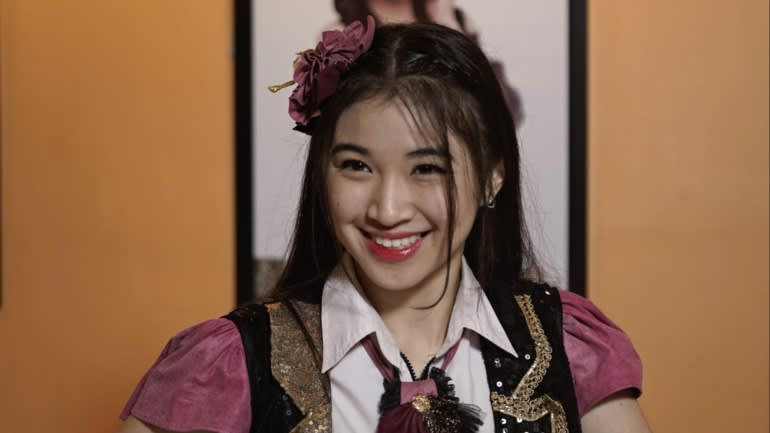 The members and the staff racked their brains for a way out of the crisis. They realized that the group had made no serious efforts to win fans through online operations because it had been bound by the "idols you can meet" formula. As the COVID restrictions made this approach inoperable, however, the group decided to expand its online operations out of necessity. The key ingredient of the new online strategy is the livestreaming of stage performances, launched in April. By paying 25,000 rupiah ($1.77) in advance, fans in any area of the nation or even in other countries can view their performances live.

During such live online shows, JKT48 members respond to real-time messages from fans. During the Oct. 22 concert, one viewer who is in a teaching job expressed his fatigue due to being forced to teach classes online.

Many fans are keen to share their COVID-related hardships and receive inspiring words from group members.

The group has also started online "shake-hand" events. Before the pandemic, the group used to pour a lot of energy into events where fans could shake hands with the band members -- as well as purchase CDs, photo collections and other JKT48 merchandise -- as important opportunities to solidify and expand its fan base. During the livestreaming of the group's performance in October, members responded to real-time messages from fans, displayed on the stage. (Photo by Dimas Ardian)

In online shake-hand events, fans and members exchange words and smiles through the Zoom videoconferencing system. While fans cannot actually shake hands with the band members, they can sometimes enjoy one-on-one interactions with a member at home.

A Dentsu Group unit that manages JKT48 says the group operated in the red in April and May, but its revenues started rebounding after it launched online activities and returned to pre-COVID levels in October.

Because of the group's strategic focus on direct contact with fans, most of its hardcore fans were in Jakarta, since Indonesia is an archipelago stretching some 5,000 km east to west, roughly the same distance between the U.S. east and west coasts. For many Indonesians, traveling to Jakarta requires amounts of money and time they cannot afford to spend. JKT48's live online programs are viewed by fans not only on Indonesian islands other than Java, where Jakarta is located, but also in other countries including Japan, the U.S., Thailand and Malaysia. The group's fandom is rapidly growing geographically.

"Now half of the fans are in the Jakarta metropolitan area and the remaining half are in other parts of the countries and overseas," a Dentsu employee said.

JKT48's online strategy has worked well partly because of Indonesia's love affair with the internet. Indonesians spend a daily average of seven hours and 59 minutes on the internet, more than an hour longer than the world average of six hours and 43 minutes, according to data compiled by We Are Social, a U.K.-based research company, and others as of January 2020. 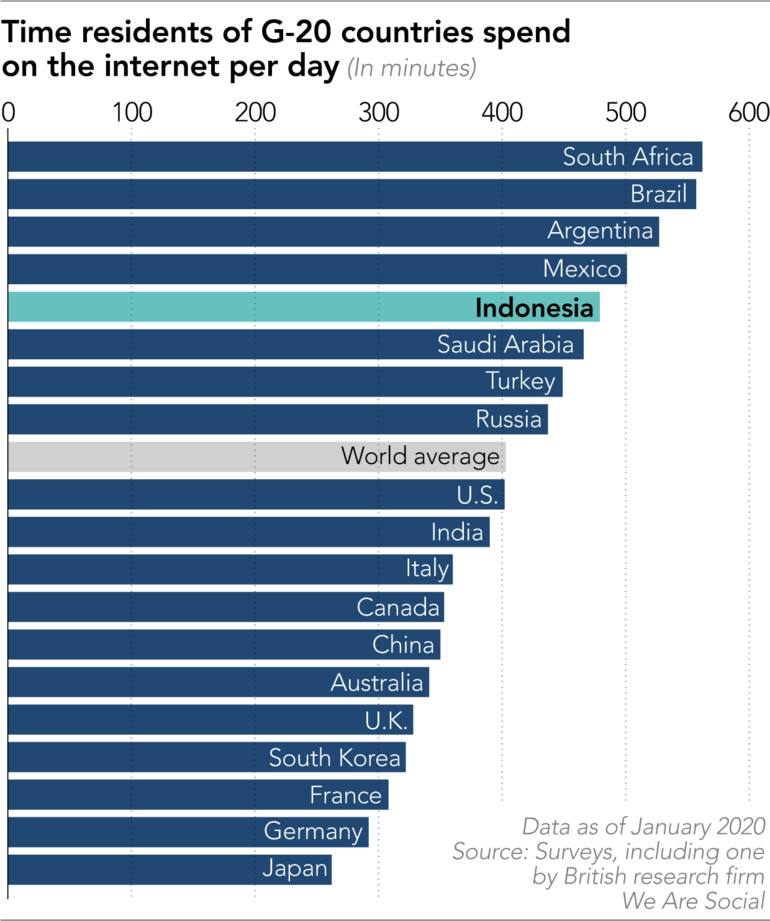 The provincial governments in Indonesia are gradually easing the COVID restrictions on commercial facilities in bids to strike a proper balance between efforts to contain the virus and economic activities. In late October, JKT48 restarted live stage performances at its theater with audiences at only 5% of capacity while taking preventive measures including asking the fans to wear masks and maintain social distancing.

But the group members are yearning to restart performing to a full house, filled with all the excitement and enthusiasm that use to accompany its events. Meanwhile, new fans who have discovered the group's allure since it began full-scale online operations are eagerly waiting for opportunities to meet the members face to face.

Beby Chaesara Anadila, the group's captain, who had decided to leave the band before the nation was hit by the pandemic, has changed her mind. "I have decided to postpone my graduation from the group until the day we can perform to a capacity audience again," she said.