TOKYO -- Japanese animated movie "Demon Slayer" is taking the world by storm, prompting a number of companies to cash in on the phenomenon as a way to support sales amid the ongoing coronavirus pandemic.

"We expect anime streaming revenue and the success of the movie to contribute to our business this year," said Naomi Matsuoka, who is in charge of Sony's Finance and IR, during the company's earnings conference on Wednesday.

She was referring to the popular TV anime "Demon Slayer" -- known as "Kimetsu no Yaiba" in Japanese -- which was produced by Sony's anime and music production unit Aniplex.

The anime is based on the manga comic book series of the same name and is set in Japan about 100 years ago. The story follows Tanjiro Kamado, a young boy who fights various monsters in a bid to bring his little sister, who was transformed into a demon, back to human form.

The manga series has increased sales over time, with cumulative sales for the 22 comic books, including electronic versions, exceeding 100 million copies, a feat that has been accomplished by popular series like "One Piece" and "Dragon Ball." According to Japanese publisher Shueisha, the manga is sold in over 30 countries and regions, including China, Taiwan, Thailand, Vietnam and the U.S.

On Oct. 16, "Demon Slayer: Mugen Train," the film version and sequel to the TV anime series, was released in Japan. Taiwan released the film on Oct. 30, with fans visiting the theaters cosplaying as the characters. Aniplex has announced that the film will hit North America in early 2021. 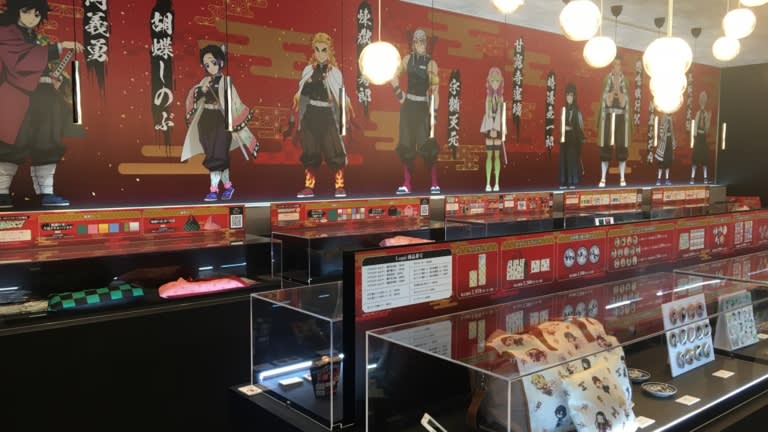 Lawson's pop-up store in Tokyo with giant pictures of characters on the walls attracted several hundred people over the weekend. (Photo courtesy of Lawson)

In Japan it raked in 10.7 billion yen ($102 million) in just 10 days after its release, shattering records as people rushed to theaters.

The film has become the fastest ever to reach 10 billion yen in ticket sales in Japan, surpassing the previous record held by Studio Ghibli's "Spirited Away," which took 25 days to pull in the same revenue.

"Images of battle scenes were just beautiful, and Tanjiro's love for his sister was heartwarming," said a 30-year-old male fan who has been passionate about the anime and went to see the movie in Tokyo on Oct. 25. "The theater was full, from kids around five to adults. ... I feel it's a real social phenomenon."

Many companies are trying to draw "Demon Slayer" fans nationwide with their merchandise and services associated with the movie. Convenience store chain Lawson started on Oct. 6 selling a total of 50 products with pictures of Tanjiro and other characters, such as sandwiches, Japanese onigiri rice balls and sweets.

Bookings for Demon Slayer Christmas cakes and osechi, Japanese traditional New Year's dishes, are "already almost full," said a press representative. Over 10 million Demon Slayer products have been sold up to Wednesday, he added. Its pop-up store in Tokyo with giant pictures of the characters on its walls attracted several hundred people over the weekend.

Sushi restaurant chain Kura Sushi has also benefited from the movie. Its sales campaign, which offered plastic file folders and desk pads with printed characters to its guests, "only lasted a few days," having sold out even after doubling the amount to 400,000 units each, according to a press representative. Its sales surpassed last year's level for the first time in seven months in September, as the restaurant chain has been severely hit by the coronavirus pandemic.

Fukuoka-based Kyushu Railway, which has been operating trains festooned with Demon Slayer characters, will operate a steam locomotive similar to the one that appeared in the movie -- with a special plate on the front with Mugen written on it -- from Nov. 1. Kyushu Railway will operate this steam locomotive similar to the one that appeared in the movie -- with a special plate on the front -- from Nov. 1. (Photo courtesy of Kyushu Railway) © Koyoharu Gotoge/Shueisha, Aniplex, ufotable

"Demon Slayer" has been able to grow its fan base globally through streaming services such as Netflix and Amazon Prime Video, as well as Funimation, a U.S. anime distribution company under Sony. YouTube and other social media sites have also supported its popularity outside Japan. The TV series has been streamed online in over 100 countries.

In India, 24-year-old Karan Rawat has been a fan of the anime series since its release in 2019. "The characters are very likable and the fights are so satisfying to watch," said the university student in Vaishali, Uttar Pradesh.

The movie has not been released in India, but Rawat said, "I would definitely go see the movie if it is released in my region. I plan to buy T-shirts or other merchandise so I can wear it to the movies."

Some fans have even created online petitions to encourage distributors to bring the film to theaters in their region.