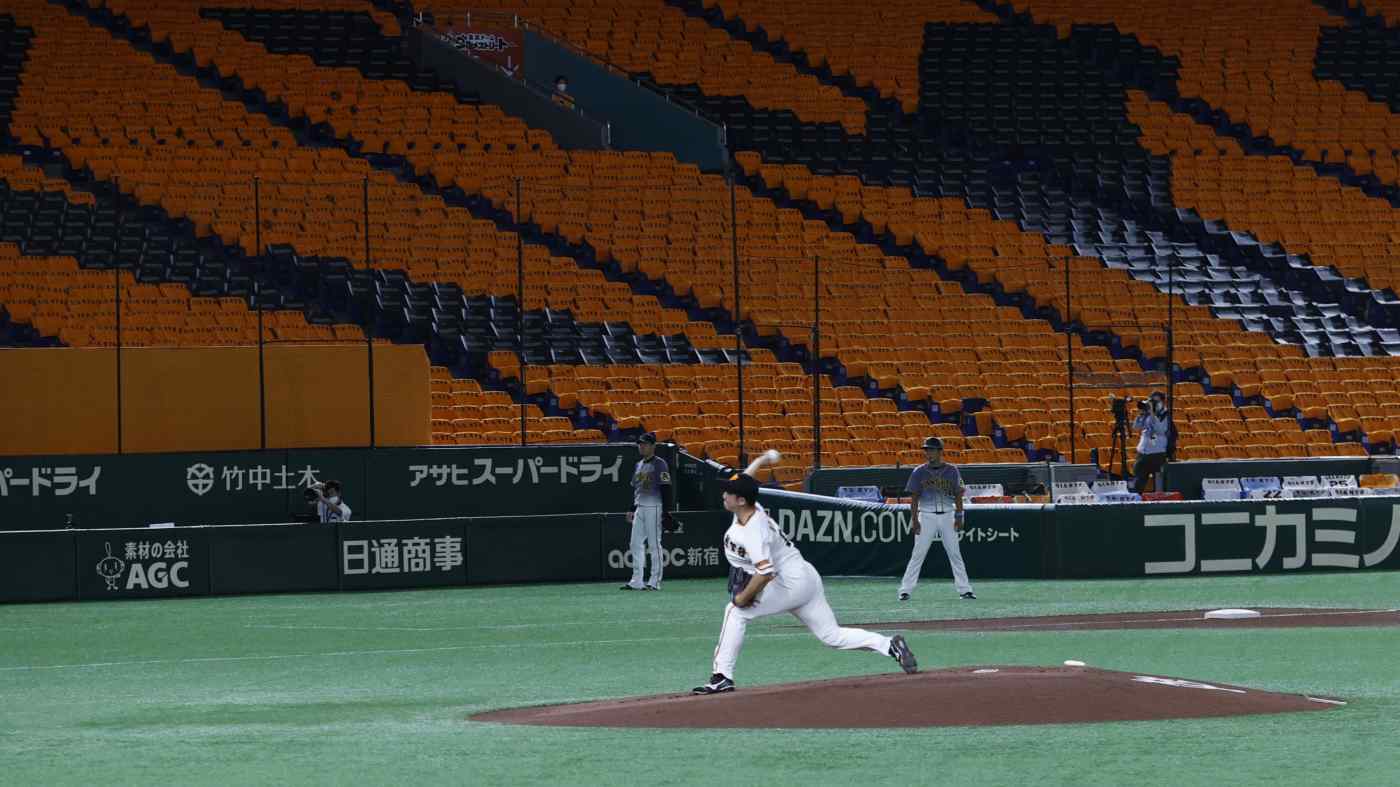 TOKYO -- Nippon Professional Baseball, Japan's biggest sports league, opened its 2020 season on Friday, but without fans in the stands due to the COVID-19 situation.

The lingering pandemic has prompted the 12 teams and their parent companies to come up with new ways to keep fans' interest and generate revenue. Some teams hope to have found potential solutions in internet streaming and virtual reality technology.

The no-fans-in-the-stands edict even held sway at the traditional Central League opener between the Yomiuri Giants and Hanshin Tigers in Tokyo Dome. In the quiet stadium, which has a sterile atmosphere even with fans, the Giants came out on top, 3-2.

The NPB season usually gets underway in March with each team playing a 143-game schedule. But the current season has been abbreviated to 120 games for obvious reason.

Since ticket sales make up a big chunk of a team's revenue, each club will struggle to generate anything close to a profit this season.

Ticket sales account for about one-third of the NPB's total revenue of roughly 180 billion yen ($1.68 billion) , according to an estimate by Itaru Kobayashi, a professor at J.F. Oberlin University and a former director for the Fukuoka SoftBank Hawks. The rest comes largely from sponsorships, content distribution and merchandise sales.

The teams will have to get creative and hit on a new business model if they are to survive the pandemic and the new normal that it leaves in its wake.

"We want to try new things on a trial and error basis," a spokesperson for Tohoku Rakuten Golden Eagles said, "so that we can say in the future that 2020 was a turning point for the successful professional sports business."

The representative added that the team will be exploring game watching experiences outside of stadiums and online sales of merchandise.

The game-watching experience will be online, over the Rakuten LIVE streaming app that will allow for in-app tipping, where users pay money to use cheering functions while they watch games.

The SoftBank Hawks are showing their games in virtual reality, through the 5G Lab content streaming service. The Yokohama DeNA BayStars, backed by an online game maker, partnered with telecom service provider KDDI to create new forms of entertainment, including a virtual baseball stadium.

The Saitama Seibu Lions, backed by a big railway operator, worked with affiliate Prince Hotels to offer game-watching in hotel rooms. Customers can watch the Seibu Lions games on 300-inch screens and remotely connect with fans watching from other rooms.

According to Rakuten Eagles, there will be declines in ticket sales and sponsor fees due to some canceled events. "The core business model," the team's spokesperson said, "was built on the premise of viewers coming to the stadiums."

Ticket revenue is not all that will evaporate. If no one goes to a game, then the home team cannot sell beer and other concessions.

The put-fans-in-seats business model had been enjoying an upswing before COVID ruined everything, with the number of visitors to stadiums continuously growing in recent years, according to a Seibu Lions spokesperson. However, the team added in a written statement to the Nikkei Asian Review, it is now "increasingly important to consider businesses that are beyond the frameworks of existing ones."

The Lions, who play in the Tokyo bedroom community of Tokorozawa, Saitama Prefecture, have begun recruiting ideas from within Seibu Lions regarding new revenue streams and cost cuts. New revenue-generating businesses would center around digital technologies, the team's spokesperson said.

In the case of Major League Baseball in the U.S., the league and players association have been in lengthy negotiations over compensation during an abbreviated season. No decisions have been made about how to try to salvage the 2020 schedule.

Unlike their U.S. counterparts, Japanese teams have powerful parent companies. Besides Rakuten, SoftBank and Seibu, there are food and beverage makers Lotte Holdings and Yakult, which became rich selling probiotic milk fermented with bacteria. "Since many teams are under large groups, they do not have to worry too much [financially] despite COVID-19," said J.F. Oberlin's Kobayashi.

Kobayashi estimates much of the teams' sponsorship fees are paid by their parent companies, which use the clubs as national advertising vehicles that appeal to all ages.

The exception is the Hiroshima Toyo Carp, which despite its major shareholder, Mazda Motor, is a self-supporting entity. Consistently profitable, the team had amassed 9 billion yen ($84.1 million) in net assets by the end of 2019.

At an owners meeting in May, Rakuten CEO Hiroshi Mikitani proposed in vain that all teams cut player salaries. Kobayashi said the teams are unlikely to do this out of fear of harming the reputations of the parent companies. Picking a fight with the players could damage the companies' businesses, many of which cater to general consumers.

But COVID-19 is expected to have a long-term impact on spectator sports, so if the league does not make adjustments, the teams as well as their parent corporations will suffer. The clubs will have to "think more seriously about how to increase revenues from television and internet media," Kobayashi said.

He suggested that the industry could benefit from taking drastic measures, like introducing sports betting, which is currently illegal in Japan.