TOKYO -- More Japanese game developers are riding the esports wave that has transformed the business models of many American and Chinese companies, leveraging their experience in mobile games as the field shifts away from personal computers.

The impact of esports is exemplified by the runaway success of Fortnite Battle Royale from U.S.-based Epic Games. Despite being free to play, Fortnite, which offers costumes and the like for sale in-game, racked up $1.8 billion in sales last year, according to SuperData Research.

And frequent tournaments with big prizes lure hardcore players. Fortnite ranked as the top game by total prize money worldwide in 2019, according to Esports Earnings.

Square Enix Holdings' Final Fantasy XV earned well over $500 million, by some estimates, in the two months after its November 2016 release, with 6 million copies sold. But such massive games take years to develop and bring in revenue only once -- at the time of sale -- while "freemium" games like Fortnite provide ongoing revenue streams.

Some Japanese developers are learning from the success of Fortnite. GungHo Online Entertainment, best known for hit smartphone game Puzzle & Dragons, is angling for a global esports presence with Teppen, a competitive online card game launched this past July. The game, co-developed with Capcom, features characters from such famous franchises as Street Fighter.

GungHo held the first Teppen World Championship in December, with players from North America, Europe, Japan and the rest of Asia vying for a 30 million yen ($274,000) grand prize. Unusually for a Japanese game, Teppen launched in Europe and the U.S. before Japan and Asian markets. It topped 4 million downloads in its first four months. By comparison, Puzzle & Dragons has been downloaded 53 million times in Japan since its 2012 launch, but has proved slower to take off abroad, with 17 million downloads in the rest of the world.

Konami Holdings completed an esports venue in Tokyo's Ginza district in December, and it will open a school there in April for not only would-be players, but also commentators and operating personnel.

But despite its recent growth spurt, Japan's esports scene still lags far behind those of other big gaming markets. 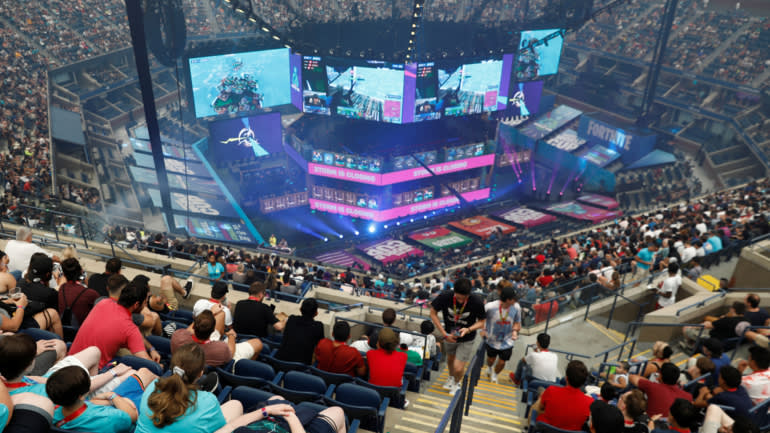 A total of $64.42 million in prize money was awarded across 350 Fortnite events, according to Esports Earnings. Unlike in Japan, where prize pools are funded mostly by the game companies involved, overseas tournaments of all sizes win sponsorships from companies eager for publicity.

Of the top 10 games by global prize money last year, eight are from Tencent Holdings or companies it has invested in. The Chinese group ranked as the top-selling game company in the world in April-June 2019, above Sony and Nintendo, according to Dutch firm Newzoo, which puts Tencent's game-related revenue at $4.6 billion.

A recent trend in esports offers Japanese developers an opportunity to catch up. The field is shifting away from its traditional stronghold of personal computers -- where Japanese companies have a relatively small presence -- to mobile devices. Superfast fifth-generation wireless service is starting to become available, which will make it easier for large numbers of people to play together simultaneously on smartphones.

The shift is also expected to broaden the potential base for esports beyond people with gaming PCs, which can cost upward of $2,000 for a competitive system.

"Japanese companies have strong development capabilities in smartphone games," said Tasuku Meguro, editor in chief of Japanese esports site Famitsu App VS. "If they get more overseas users, they could rise in the ranks."

But the clock is ticking. Epic has adopted a multidevice strategy with Fortnite, making the game available on PCs, smartphones and consoles. League of Legends by U.S.-based Riot Games, another esports mainstay said to have more than 100 million players, is set to come out for mobile devices this year.