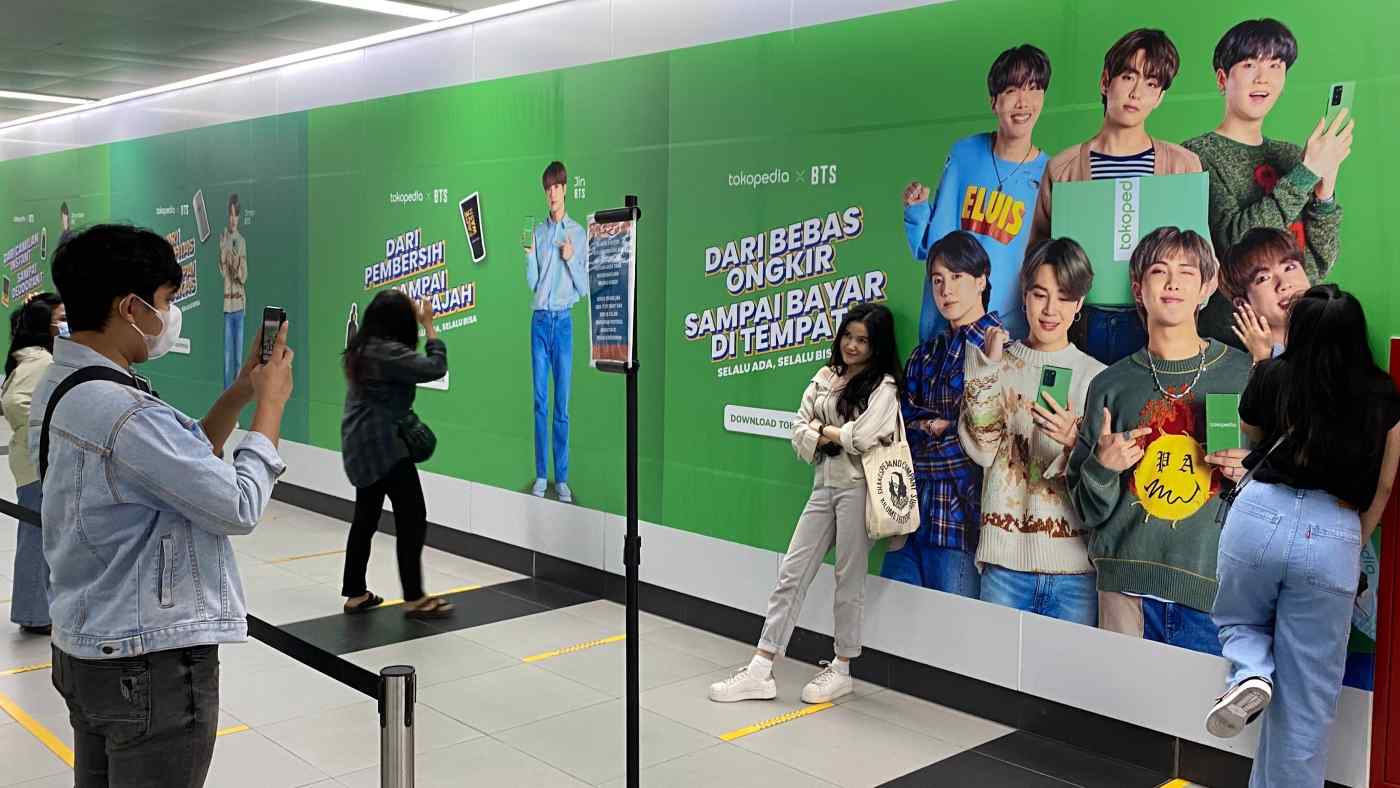 South Korean companies, ranging from makers of large-screen TVs, like Samsung Electronics and LG Electronics, to cosmetic brands LG Household & Health Care and Amore Pacific are looking to take advantage of the K-pop craze in Indonesia to give them a leg up in the country.

LG Household & Health Care and Amore Pacific use K-pop artists in their advertising and sell products online in the region. South Korean Retail giant GS Group also plans to expand its network of stores in Indonesia.

Indonesian companies, too, are cashing in on K-pop. E-commerce company Tokopedia has hired South Korean boy band BTS and popular female group Blackpink as brand ambassadors, a move which helped it regain its position as the country's most visited e-commerce platform, nudging out Singaporean conglomerate Sea Group's Shopee.

It is easy to see the attraction of K-pop for consumer-facing companies. On Feb. 24, "Fix You," British rock band Coldplay's 2005 hit, became a hot topic on Indonesian Twitter after the insanely popular BTS announced plans to cover the song.

That same month, Twitter released figures showing that K-pop-related tweets hit a record high of 6.7 billion, up 10% from the previous year. Indonesia was the top source of this chatter worldwide, up from the third place in 2019. The number of tweets by country was not disclosed, but "surging conversations from fans in Indonesia and India generated enough tweets to push both higher in the 2020 rankings," the U.S. social media company said.

The number of K-pop fans in Indonesia is exploding, and "the country always ranks among top in the number of video views on YouTube," said a representative of JYP Entertainment, a leading South Korean entertainment agency that manages, among others, the popular female pop groups NiziU and Twice.

A third of Indonesia's 270 million people are between the ages of 10 and 29, making it an attractive market for South Korean entertainment agencies. "Indonesians have positive feelings toward South Korean content and have great potential," said a representative of YG Entertainment.

Although 90% of Indonesians are Muslims, the county is proud of its diversity, as it is home to more than 300 ethnic groups. Many Indonesians become familiar with traditional dances at an early age, which may explain why K-pop's unique choreography has caught the eye of so many. And the two countries do not have the fraught political relations that hamper cultural exchange between some in the region, like Japan and South Korea, for instance. Making a concerted effort to win local admirers is one of the secrets of K-pop's success in Indonesia. Female pop group Secret Number, for example, is gaining a local audience, as one of its five members has roots in Bali. "They are trying to communicate with local fans in Indonesian in live performances and on social media to get a sense of closeness," said a JYP representative.

K-pop groups, including Bigbang and Girls' Generation, have had many fans in Indonesia since the 2000s. "The growing popularity of K-pop artists in recent years is linked with South Korea's economic advancement to Indonesia," according to an official with Indonesia's Ministry of Tourism and Creative Economy.

Indonesia and South Korea have deepened their commercial ties in recent years, concluding an economic partnership agreement in December last year. Indonesia was South Korea's fourth-largest trading partner in Southeast Asia and bilateral trade is expected to continue increasing. It seems that Indonesians are developing a greater affinity for South Korean culture as the two countries' economies grow closer.