K-pop, music lessons and the next Korean wave of rhythm games

Startups step away from market leaders, into physical therapy and fitness centers Rhythm games like Taiko no Tatsujin are undergoing an evolution in South Korea that is leveraging the technology to help people learn how to play an instrument, recover from an injury or work out.
KOTARO HOSOKAWA, Nikkei staff writerDecember 22, 2019 13:18 JST | South Korea
CopyCopied

SEOUL -- South Korean startups are bringing rhythm games to new players and hobbyists, expanding their use to music classes and physical rehabilitation. The new adaptations of the games, made famous in the 1990s by arcade favorites like Dance Dance Revolution, is expected to expand the market.

One of these startups, Jameasy, has developed a small sensor attachment for musical instruments that monitors a player's pitch and rhythm. The device works with an app that can be downloaded to smartphones or tablets. The screen shows musical notes moving from right to left, just like in the popular rhythm game Taiko no Tatsujin by Bandai Namco Entertainment. When a musician is pitch perfect, a high score is given.

Turning practice into a game injects an element of fun into the humdrum.

Jameasy began by providing clothespin-like attachments for string and wind instruments, and plans to expand into pianos and other instruments for which there is high demand. It is signing up entire music schools as clients.

The device costs $69, and the app offers 100 well-known classical music pieces, with the company planning to negotiate with score publishers to increase the number. 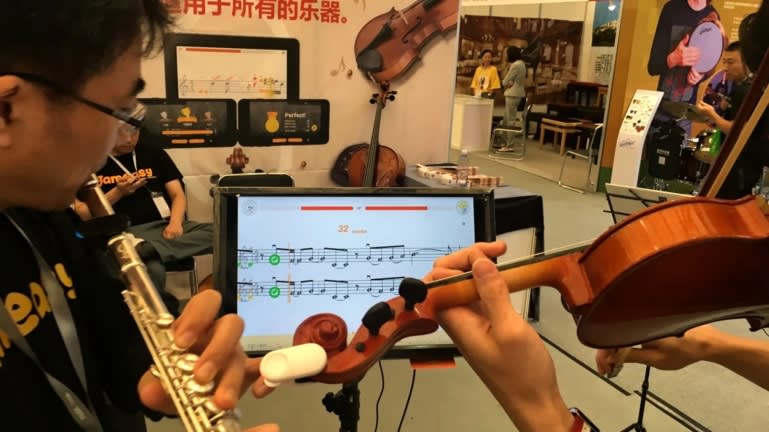 When attached to an instrument like a violin, Jameasy's small sensor can recognize a player's scale and rhythm errors.

Jeon and two of his Samsung colleagues founded Jameasy in December 2015. Jeon is in charge of algorithm development. Mechanical and software engineers have joined the company to develop products and services.

Jeon considers Japan a potential market because of its large number of schools with brass bands.

Another startup takes advantage of the popularity of BTS and other K-pop artists in Europe, the U.S. and Asia. Kinetic Lab has developed a wearable and an app to make dance practice more fun. The wristwatchlike device monitors the user's body motions. As the user tries to synchronize his or her movements with those of an on-screen dancer, scores are displayed showing how well the student has pulled off the moves.

Kinetic Lab's K-Dance is similar to Dance Dance Revolution, the genre-defining rhythm game Konami introduced in 1998 that forced players to use their feet rather than hands to keep time with the on-screen prompts. K-Dance forces players to make whole-body motions. It also allows "dance battles" between two players.

Users can also compose original music, choreograph their moves and upload videos to YouTube, Instagram and other platforms. Kinetic Lab hopes to raise the profile of K-Dance by encouraging popular performers to upload videos. Kinetic Lab's K-Dance captures body motions with a device users wear on their wrists that allows for players' performances to be scored.

The wearable came out this month costing about $100. Kinetic Lab plans to begin promoting the product to young Southeast Asians and Europeans next year. In addition to riding the K-pop boom to overseas markets, Kinetic Lab plans to pitch the device to fitness centers, rehabilitation clinics and arcades.

South Korea, the first country to develop online games playable on PCs, became known as a "game powerhouse" in the 2000s. It also invented esports, which has become a craze among the globe's youth and now rivals professional spectator sports in popularity.

But China and the U.S. have entered the online game arena, and South Korea lags those two giants in the smartphone game market.

The country's game industry has estimated sales of 6.5 trillion won (5.6 billion), according to the Korea Creative Content Agency, but it's facing a crisis.

One symbolic development was the planned sell-off of market leader Nexon that, after a number of twists and turns, never took place. It was said to have been worth 10 trillion won. Before being called off, the move was being interpreted as an acknowledgment that Nexon's founder -- the star of the industry -- had determined the sector had reached its growth limit. The botched bid ended up bringing down the share prices of Nexon's competitors.

The Korea Economic Daily reports that of 35 listed game developers, 15 have incurred operating losses and the three market leaders -- Nexon, Netmarble and NCSoft -- have seen their operating profits fall. This contrasts sharply to the market direction of China's Tencent and other platformers riding high on smartphone games.

With startups now pushing the video game envelope, major developers are likely to struggle for some time.