BANGKOK -- The publisher of Thailand's largest and oldest English newspaper, The Bangkok Post, plans to sell two big buildings in the Thai capital, the only major fixed assets the company owns, to raise cash so it can keep the print version of its daily up and running in the face of declining revenue brought on by the shift to online media.

The 73-year-old Bangkok Post will sell its 30,000-sq.- meter printing plant and distribution center, and its 35,483-sq.-meter headquarters. The two assets are worth an estimated 1.68 billion baht in all.

The sales are seen as a desperate effort to keep the print version of the Bangkok Post alive. The publisher transformed two Thai-language newspapers, Post Today and M2F, to online-only publications earlier this year, as it can no longer absorb the losses it has posted continuously since 2014.

But the Bangkok-listed company continues to struggle. It had a net loss of 341.5 million baht in the first nine months of 2019, more than double that of the same period of a year earlier, due to declining revenue and impairment loss on printing equipment. At the end of September, Bangkok Post's shareholder equity shrank to just 60 million baht, down from 1 billion baht at the end of 2015.

The Stock Exchange of Thailand gave a C rating to Bangkok Post's shares, indicating the company has severe financial problems. That rating is typically given to company whose shareholders' equity falls below 50% of paid-up capital. 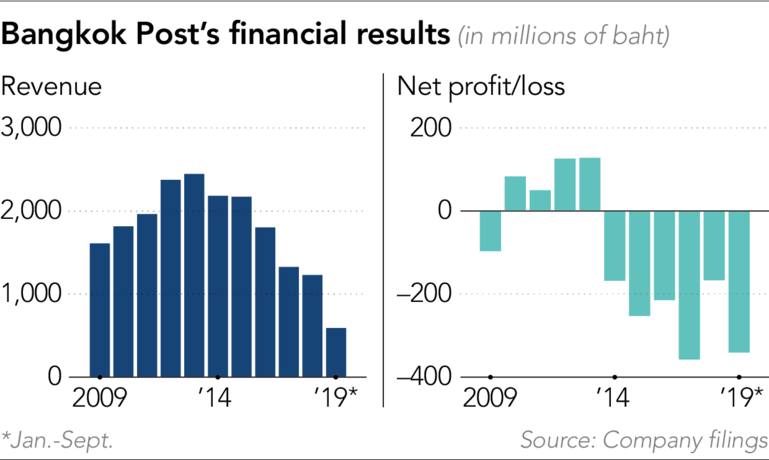 Founded in 1946 with seven Thai shareholders by Alexander MacDonald, a World War II U.S. military intelligence officer, the Bangkok Post has been the most enduring and influential English-language newspaper in the kingdom, and came to be considered the world's window on Thailand.

While the newspaper had been considered viable as a stand-alone until recently, and is widely recognized as a strong brand, circulation has fallen greatly. The Post was once virtually the only publication audited in Thailand, but that ended over five years ago. Paid subscriptions have seen double-digit falls in recent years and insiders say now number fewer than 10,000.

"We decided to sell the [printing presses] and use an outsourced printing house for the Bangkok Post printed version," said Soonrath Boonyamanee, the newspaper's editor. "We don't have any plan to stop our printed version," he said, although he acknowledged that the online version is growing much faster.

Some analysts are skeptical. Pawat Ruangdejworachai, media director at Media Intelligence, said the sales are just a tactic to put off the death of old-fashioned newspapers, as reader behavior has completely changed and everyone has moved online. The move "could help delay the end of the print version. However, the company has to admit one day in the near future that it has to switch to an online version as the world goes digital," Pawat said.

Bangkok Post's major stockholders are Suthikiati Chirathivat, the most senior member of family that owns retail conglomerate Central Group, and Bangkok Bank. It is believed that Bangkok Bank has helped keep the company afloat in the past by postponing debt repayments.

The Nation, a 48-year-old English-language newspaper and the only local competitor to The Bangkok Post, stopped publishing its print version in June this year, as it could no longer bear the losses it had racked up. Its publisher, Bangkok-listed Nation Multimedia Group has moved all its contents to its website and TV channel.

Big Thai newspapers that once sold more than 1 million copies a day, such as Thairath and Daily News, have their own websites as well as print versions.

Thairath is Thailand's biggest newspaper and has had both print and online versions since 2018. Thairath's website attracted more than 2 billion page views in 2018, making it the most viewed news website in the country.