TOKYO -- Netflix, the streaming service that has shaken up Hollywood, has unleashed its brand of big-budget disruption in Japan's TV industry.

For Japan's actors, directors and other creative types, working with Netflix is an exciting new prospect. Not only does the U.S. company bring more money to the table than all of Japan's major broadcasters combined, it also offers more freedom to tell complex, dark, even risque stories -- and share them with a truly global audience.

This is why some call Netflix the "creative kingdom."

Kazutaka Sakamoto, executive producer of "The Naked Director," breathed a sigh of relief last summer when Netflix CEO Reed Hastings gave his assessment of the series. It was well-made and entertaining, Hastings said.

Sakamoto had left a TV production company and joined Netflix in 2015, the year the company entered the Japanese market. He came across the book on which "The Naked Director" is based in early 2017.

A director friend had been trying to turn the book into a production but gave up. The friend hoped Sakamoto could make it happen, because of Netflix's reputation for bold, sometimes controversial programming.

While broadcasters must consider their sponsors' reactions, the bulk of Netflix's revenue comes from more than 150 million subscribers worldwide. These makes it easier to address taboo themes and produce subject matter that might appeal to niche audiences. With this freewheeling approach, the California-based company has produced a string of global hits -- from the comedy-drama "Orange is the New Black," about a women's prison, to "Narcos," a tense take on the rise of South American drug lords.

The first thing Sakamoto did after getting the green light for "The Naked Director" was to bring Jason George, a "Narcos" writer, to Japan. Sakamoto wanted George's advice on depicting an outlaw character who might be difficult for viewers to empathize with. He also wanted to make sure the racy scenes he envisioned would not come across as gratuitous or disrespectful to women.

The discussions proved so fruitful that Sakamoto enlisted George to help write the script. 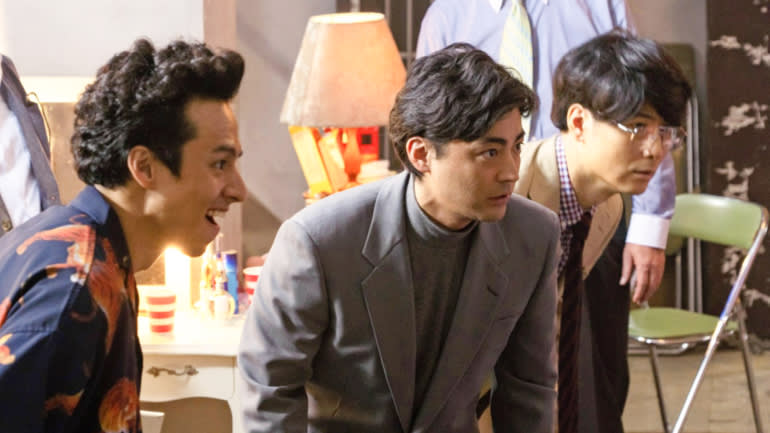 Yamada, center, was surrounded by a supporting cast of well-known actors.   © Netflix

The timing worked out well. Asia, Europe and the Middle East are increasingly driving Netflix's growth. In turn, the company is keen to find talent and promote productions in those markets. It allows its local units to create original shows at their discretion, when they are ready; "The Naked Director" was the first for the Japanese arm.

To support creative pursuits, Netflix puts a strong foundation in place. Back-office operations, including PR and legal affairs, are handled by staff trained in the U.S.

Then there is the money. In 2019, Netflix spent $15 billion on content globally. That is 400% more than Japan's public broadcaster NHK, which is known for ambitious yearlong historical dramas.

Generally, TV shows in Japan cost tens of millions of yen per episode. In contrast, some Netflix shows reportedly top 1 billion yen ($9 million) per episode. The figure for "The Naked Director" is estimated at 100 million yen.

In yet another difference between Japanese TV and Netflix productions, one writer is typically responsible for an entire Japanese series, but four writers spent a year penning "The Naked Director." The big budget meant the producers were able to cast Japanese A-listers such as Tetsuji Tamayama for supporting roles, and build a sprawling recreation of Tokyo's seedy Kabukicho district to allow shooting in 360 degrees.

Masaharu Take, the series' supervising director, recalled his first day at a shooting location in the Tokyo suburb of Sagamihara, Kanagawa Prefecture. He was shocked and excited by the scale of the production, which resembled one of those NHK dramas. A 300-meter row house had been built in great detail. There was a crowd of extras, a "stray" dog and artificial rain that made the street muddy. These elements added up to a vivid depiction of the atmosphere in Japan shortly after World War II.

All of this was used on only one day of the nearly four-month shooting schedule. It was the setting of an important scene from the childhood of Muranishi, the main character played by Takayuki Yamada. On screen, the segment lasts for three and a half minutes.

"I was flabbergasted by the scale of the set built just for a one-day shoot," Take said. "It got me amped up from Day 1." 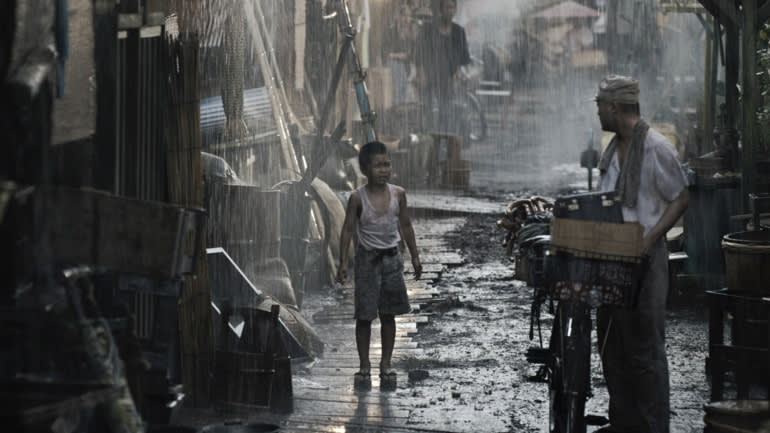 Armed with an ample budget, the crew built an elaborate set that was used for only one day of shooting and appeared on screen for just a few minutes during in the first episode.   © Netflix

Netflix spared no expense, though it did lay out a few expectations. First, though the series mainly takes place in the 1980s, it had to be universal and relevant to viewers today. Second, it should be a compelling underdog story. The company made little fuss about the sex scenes which, given the subject, were inevitable.

Sakamoto and officials at the head office did ask Take and others about the need for certain parts. As long as they could explain, there were no restrictions.

One example was an outlandish scene in the third episode, after the characters make their first adult film: A bus is set on fire. Some were baffled about the need for this, but the flames burning brightly against the blue sky were meant to symbolize the energy of young people who wanted to startle the world with their pornography.

"There was no way [typical] Japanese producers could have pulled that off," Take said. "I'm sure we would have been told it'd be fine without that scene."

That would have been true -- the story would have worked with or without it. Finding an appropriate location and torching the bus was both difficult and expensive. But the crew insisted the scene would make an impression on viewers. This bus-burning scene in the third episode raised some questions about its necessity, but ultimately the team was given the freedom to film it.   © Netflix

The creative energy spread through the cast, from Yamada and Tamayama to Shinnosuke Mitsushima and Lily Franky, and seemed to reproduce the vitality of 1980s Japan before the economic bubble collapsed.

That energy, in turn, has resonated with audiences in Japan, where Netflix counts around 3 million subscribers, and around the world. Soon after Netflix started streaming the series, Take went to the U.S. A stranger asked him: "Oh, you're Japanese. Do you know 'The Naked Director?'"

One question is whether Netflix can build on the momentum and truly change Japanese television. Hideaki Matsuyama, an associate professor who studies TV culture at Kansai University, is skeptical. He sees "The Naked Director" as a supplement to traditional TV. "The show has not necessarily succeeded in demonstrating a unique form of expression," he said. "It won't become a threat to [conventional] TV for the time being."

Sakamoto, however, is looking further ahead. He said he wants to make "interactive shows unique to the streaming service," including stories that change depending on viewer preferences.

Upon hearing that, Matsuyama said: "That's a different story. Just like the shift from film to television, TV may shift to video streaming."

In the meantime, Netflix is preparing the second season of "The Naked Director," which will go into production this spring.

The new season is expected to start streaming in 2021. By then, Netflix's Japanese prospects will likely be clearer.