SHANGHAI -- Robert Iger, the executive chairman of Walt Disney who was credited with building the Shanghai Disney Resort, must be relieved to know that the illuminations continue to glow there three months after it reopened following a coronavirus shutdown.

"Crowds are smaller compared to pre-coronavirus days," a park attendant told the Nikkei Asian Review during a visit on a rainy Sunday at the beginning of this month.

In Hong Kong, a new wave of infections forced Disney to shut down its theme park there on July 15, less than a month after it reopened, while in the U.S., the company has faced objections from its own staff over the resumption of operations.

But since reopening on May 11, Shanghai has not seen such hiccups. Park attendants were alert and, at times, tense.

"Please put on your face mask. Thank you for your cooperation," they said to visitors before each ride.

The $5.5 billion resort is one of the most strategic global investments made by Disney to capitalize on China's rising middle-income population.

Iger called Shanghai a "natural fit" for Disney. "There's just so much going on here in terms of development, construction, growth in travel and tourism," the then-Disney chief executive told the media when the resort opened in June 2016.

Amid the coronavirus outbreak, the resort was shut on Jan. 25 at the start of China's Lunar New Year one-week break, one of the busiest times of the year. Disney described more than three months of lockdown as "very difficult and challenging."

As part of social distancing practices, a few attractions, including the 'Ignite the Dream Nighttime Spectacular' light show, and the interactive walk-through 'Star Wars Launch Bay', were off-limits to visitors, as were 'Meet Mickey' photo sessions with Mickey Mouse and the Toy Box Cafe eatery.

Disney fans at the resort seemed unperturbed by the alterations and by the full day of rain. 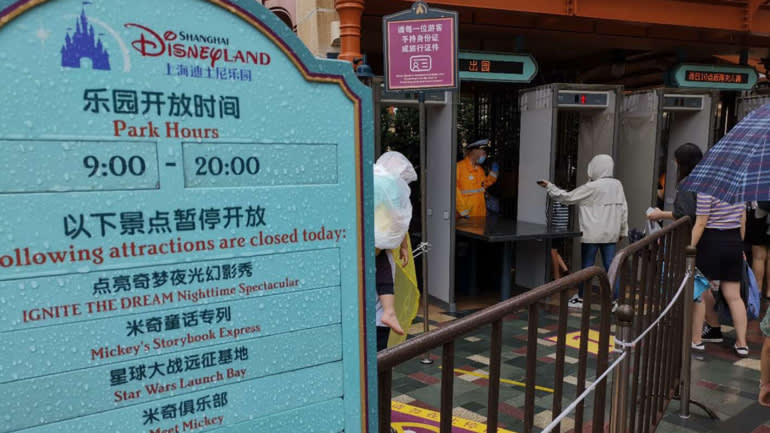 Visitors enter a less-than-crowded Shanghai Disney Resort, where they will be asked to "please put on your facial mask" before each ride. (Photo by CK Tan)

"It is a blessing with fewer people," said David Wu, who was part of a group of six people who made the trip from Jiaxing, a city about 80 km away from Shanghai.

Admission to the resort is capped at about 16,000 visitors a day, or roughly 20% of its usual capacity, according to a report last month from Imperial Capital, which is maintaining its "underperform" rating on Disney stock.

As for many businesses large and small, keeping operations running amid the pandemic has not been easy.

The global release of Disney's Mulan, a live-action movie set in China and adapted from the company's 1998 animation of the same name, has been rescheduled for the third time to Aug. 21, after initially being planned for March.

Last month, the California-based group announced the closure of Disney English learning centers in China, citing a shift in consumer preference toward online learning experiences which has accelerated during lockdown.

Targeting children between 2 and 12 years old, Disney English has provided supplementary language lessons using Disney characters since 2009. There were 44 centers nationwide as of 2013, according to local media, but Disney did not reveal the actual number.

Shanghai Disney late last year reversed its ban on the consumption of food and drink brought in from outside the resort, which it imposed in November 2017, after being sued by a customer -- underlining the growing consumer confidence regarding their rights.

Like other U.S. companies operating on the mainland under the shadow of rising tensions between the U.S. and China, Disney may find it increasingly challenging to balance politics with its economic interests.

For now, it can hope for continued momentum under the new normal business environment and carry on operating under its "authentically Disney, distinctively Chinese" tagline.

"I am humbled by the warm reception we have got in China," Shanghai Disney's Schott said. "But we are happy to be able to bring joy and happiness to the people of China. This is our mission and our role in the world."