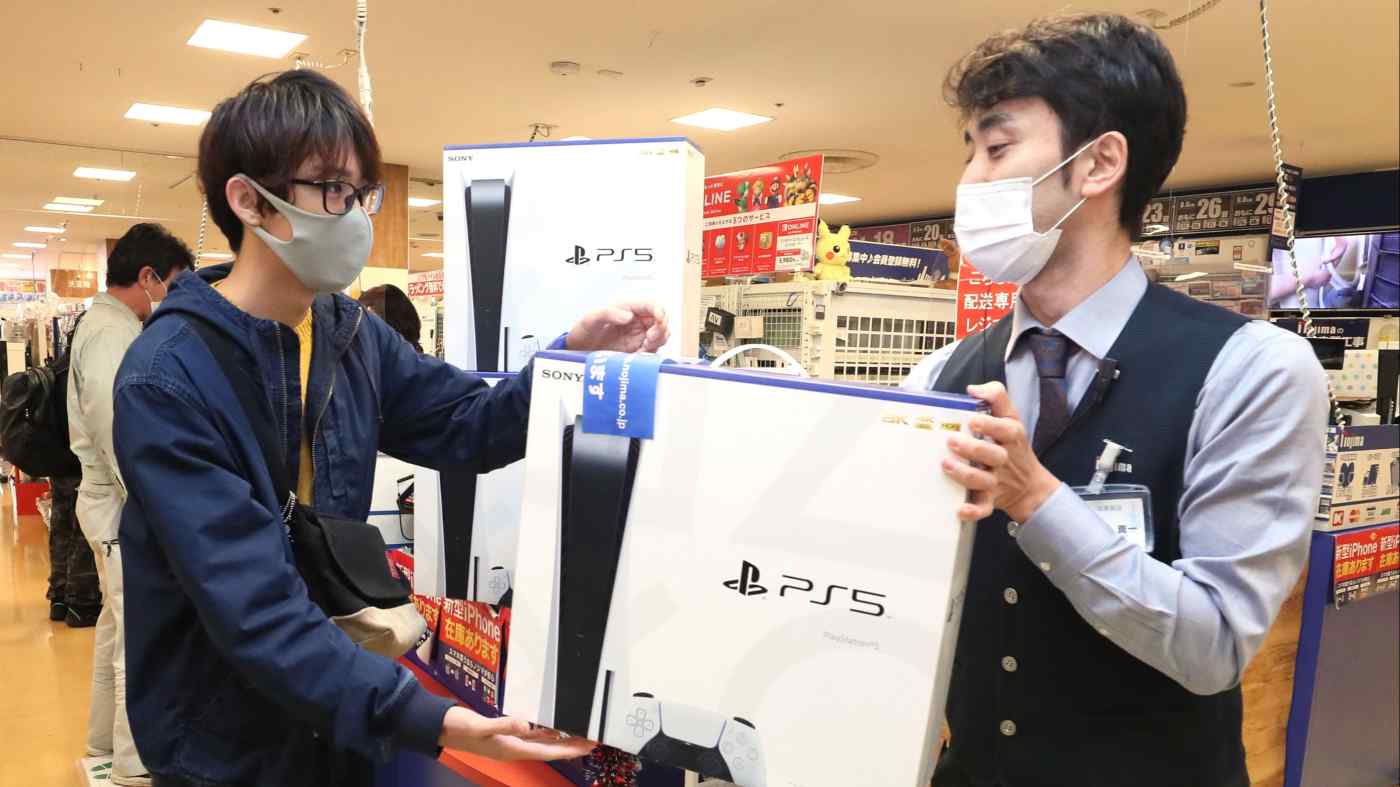 The PlayStation 5 is handed over Thursday to a customer who had reserved it ahead of the debut in Kawasaki, Kanagawa Prefecture. (Photo by Kei Higuchi)
JADA NAGUMO, Nikkei staff writerNovember 12, 2020 09:10 JSTUpdated on November 13, 2020 04:32 JST | Japan
CopyCopied

TOKYO -- Sony unveiled its next-generation PlayStation 5 gaming console in major regions including Japan and the U.S. on Thursday, with the Japanese electronics group targeting Asia as a key market as it fights rivals for market share.

The PS5 hits the market two days after Microsoft launched its latest console, the Xbox Series X. Along with Nintendo -- which is not bringing out a new console this year -- the companies hope for a big sales season as pandemic-driven demand for stay-at-home entertainment provides a tailwind for the entire gaming industry.

The PS5 went on sale for $499, along with a cheaper digital edition priced at $399. The unit is a successor to the PS4, launched seven years ago.

On Japan's top flea market platform from Mercari, consoles were selling for more than $900.

Past console releases have brought crowds of fans swarming into stores. This time, PS5 launch day sales were conducted online in a bid to prevent the spread of the coronavirus. Preorders quickly sold out in September.

"The COVID-19 situation makes us very nervous about putting stock into stores around the launch window," Jim Ryan, president and CEO of Sony Interactive Entertainment, which produces the PS5, said in an interview with Nikkei Asia. He said the company wanted to avoid huge queues in front of stores. An employee at an outlet of consumer electronics retail chain Bic Camera tends to a promotion display for the Sony PlayStation 5 game console on Nov. 10 in Tokyo ahead of its official launch.   © Reuters

The PS5 and Xbox Series X -- which was also launched with a $499 price tag -- have similar specifications, featuring speedy solid-state drives and powerful processors. But Sony has been able to offer software exclusive to the PS5, including titles like Spider-Man: Miles Morales and Demon's Souls.

Ryan said a strong lineup of games would support PS5 sales: "We've got more games and better games than we've ever had before."

Last month, Sony said it expects to sell more than 7.6 million units of the PS5 by the end of March 2021, which would surpass the PS4's sales over a similar period after its launch.

U.K. based data analytics company Ampere Analysis predicts that the PS5 could sell up to 17.9 million units by the end of 2021 and over 67 million units by 2024, 52% more than its projection for Microsoft's Xbox sales.

The Japanese conglomerate has already experienced a boost in earnings thanks to an increase in homebound gamers amid the coronavirus. Gaming sales were up over 20% in the first six months of this fiscal year, prompting Sony to raise its full-year forecast with a 37% jump in net profit to 800 billion yen ($7.6 billion).

Although Sony doesn't expect PS5 sales to contribute to its earnings this fiscal year, Ryan noted, "We are extremely confident that PS5 will be a robust contributor to a very healthy PlayStation financial ecosystem, very quickly."

Back in 2013, Sony's release of the PS4 in Japan came three months after the launch in the U.S. and Europe. Ryan said that with hindsight "it was not a respectful move toward a very important market." This time Sony has decided to launch the PS5 in Japan on the same day as other major regions.

Ryan noted that Japan is an important market for its console series. "It's the number two market for PS4 after the U.S. and we anticipate that will continue," he said.

Southeast Asia has seen massive growth in entertainment consumption during COVID-19, with consumer use in the video streaming sector increasing over 20%, according to a report by Google, Singapore state investor Temasek and U.S. consultancy Bain and Company.

"You will see renewed energy and investment from PlayStation into those markets," Ryan said, adding: "We're going to reorganize our market presence, transform our marketing [and] re-energize our connection with the local PlayStation community."