TOKYO -- About three years ago Tokyo-based anime house Aniplex pitched Sony Music Labels with an idea: How about letting LiSA do a song for "Demon Slayer," now a blockbuster TV and movie anime.

Sony Music general manager Yosuke Hasegawa bought it. He then called on singer Risa Oribe, aka LiSA, and other Sony musicians to work out a song, eventually coming up with "Gurenge," the title track for the TV series that preceded the movie.

Sony Music is lasering in on anime songs and their increasing popularity, launching the Sacramusic label in 2017 for artists whose forte is anime. "We brand anime artists and debut them both in Japan and abroad," said Hasegawa, who also serves as chief producer of Sacramusic's production department.

The domestic market for anime-related music -- which includes songs, voice acting and other musical endeavors -- grew significantly in 2019, according to PIA Research Institute, up 23% from the previous year to 24.5 billion yen ($229 million). This compares with just 7.2 billion yen in 2013, a tripling of the market over six years. And despite the live music sector all but being shut down by the COVID-19 pandemic, demand for anime has been robust.

Anime songs are popular overseas as well. According to Swedish music streaming service Spotify Technology, the most-played Japanese song in 2020 was "Gurenge," with LiSA the top-ranked Japanese artist. Eight of the other top 10 Japanese songs also were rooted in anime. 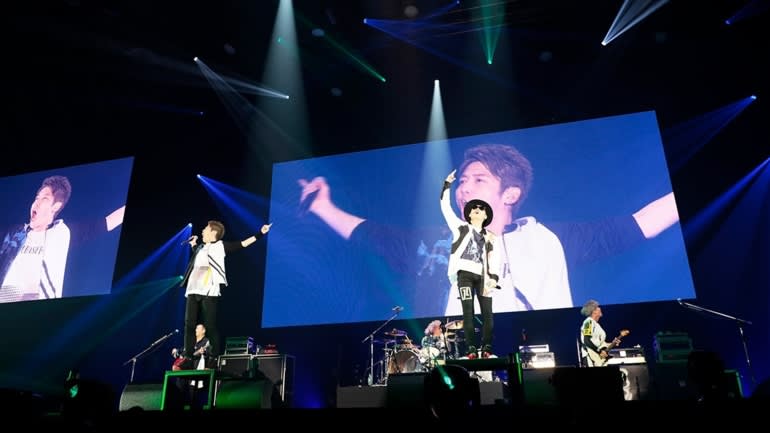 But what is driving the popularity of anime songs outside Japan? "The overseas expansion of music is no different from trade exports and imports," said Hasegawa. "If you don't have something in your country, you just get it from another country."

About 10 years ago, while accompanying a Sony-affiliated singer on an overseas tour, Hasegawa was asked by the manager of a British artist what kind of music he liked. Hasegawa mentioned a famous singer in Japan. His British counterpart was blase, saying, "We have the same in our country." He then added: "But [Japanese] anime songs are fun."

Meanwhile, the anime market continues to grow. In 2019, it stood at about 2.5 trillion yen, up more than 15% from the previous year, according to the Association of Japanese Animations. The force behind this is overseas sales, which already make up nearly half the total market. "Anime is a visual experience that was born in Japan and stretches around the world," said Hasegawa. 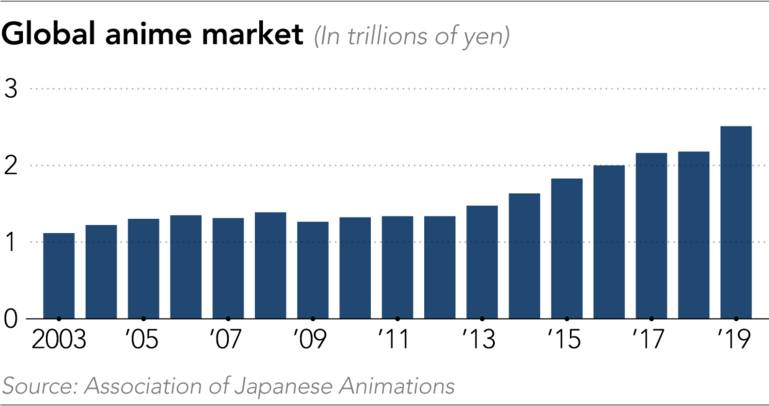 U.S. video streamer Netflix is strengthening its anime content, saying that more than 100 million households worldwide watched at least one anime title on the site in the year through last September. With the rise of video streaming services, some expect a virtuous cycle in which the anime fan base expands, drawing more attention to anime songs.

Sony plans to use its anime ecosystem to maximize the value of anime songs, a uniquely Japanese asset. In November 2020, Funimation Global Group, a major anime distribution company and subsidiary of Sony, began streaming live videos of anime songs by its artist Flow in the U.S., Canada and elsewhere.

In December 2020, Sony announced that through Funimation it would buy major U.S. anime streamer Crunchyroll from AT&T for just under $1.2 billion. The acquisition will plug another 90 million customers into its ecosystem. The anticipated acquisition of U.S.-based Crunchyroll, a major anime streaming service, will add about 90 million users to the Sony entertainment ecosystem.

Hasegawa's position is that "overseas expansion" and "overseas strategy" are different. Expansion refers to selling a wide range of domestically produced goods in foreign countries. Apple, for example, does not change the specifications of smartphones from each country. Strategy, on the other hand, means analyzing the market in a specific country to localize products and services, he argues.

Sony is not creating anime focused on overseas markets, but rather trying to increase the amount of uniquely Japanese content, which the company hopes will organically attract foreign viewers.

In contrast, the strategy of Korean popular music, or K-pop, is to thoroughly research a market first before entering it -- a smart approach given the relatively small domestic market. BTS, which debuted in 2013, is an excellent example of this: The group set its sights on the U.S. and began to produce hits tailored to the market, many of which topped U.S. music charts.

Sony is prioritizing "overseas expansion" for anime songs, delivering Japanese content as is. But localization of products is also essential.

Previously, Sony dominated the world electronics market, thanks not only to the strength of its gear but also its savvy localization strategies. Now, as the infrastructure to stream expands worldwide, the company may fall back onto the same approach, according to industry insiders, listening more to the tastes of its overseas audience rather than leaning exclusively on the success of its domestic product.