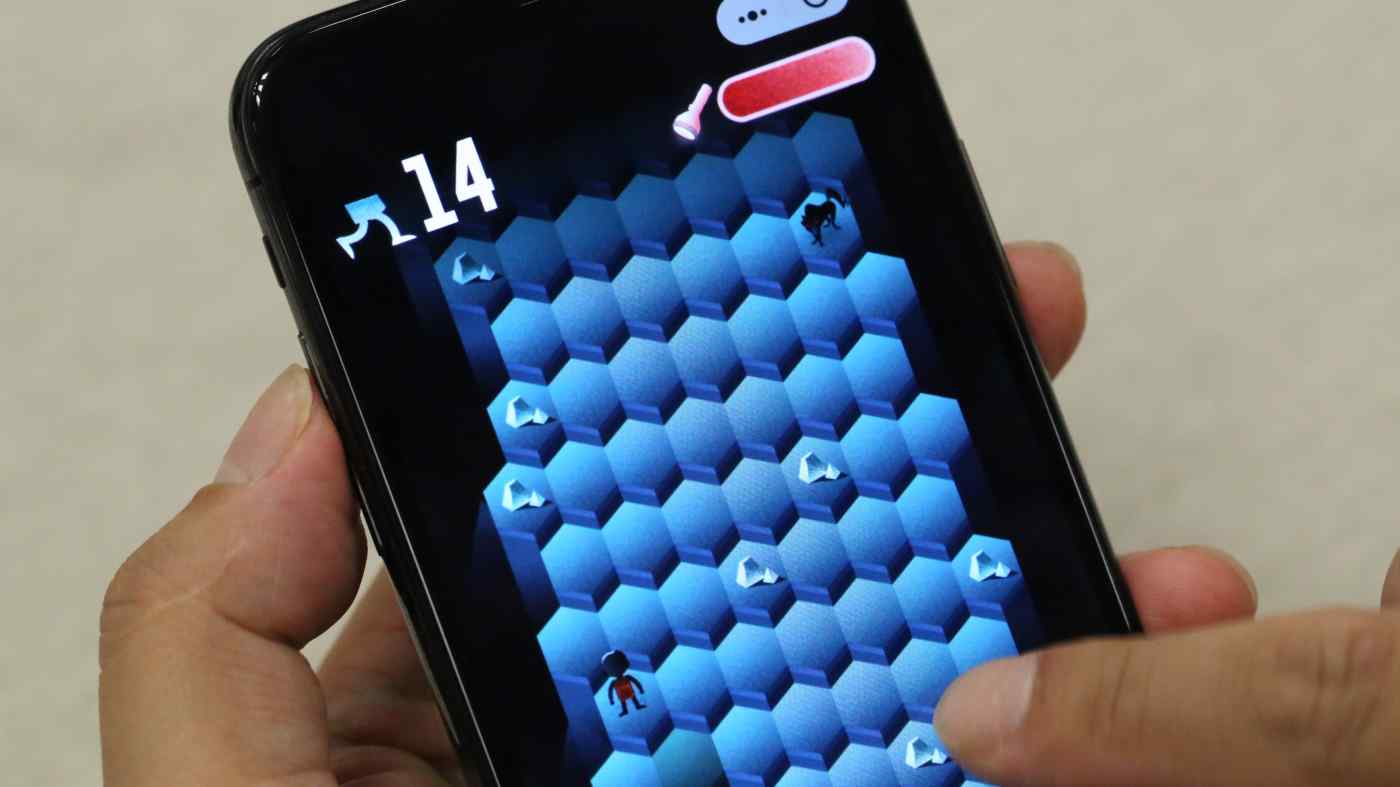 Tencent is collecting donations for erecting lights on mountain paths through a WeChat game of walking to and from school in the dark in a mountainous area. (Photo by Yusuke Hinata)
YUSUKE HINATA, Nikkei staff writerDecember 16, 2020 15:17 JST | China
CopyCopied

GUANGZHOU -- Electronic games that aim to serve the public interest are increasing in China against a backdrop of strains between developers and the government over gaming addiction among young people.

One is a free smartphone game released in November by internet giant Tencent Holdings to improve the player's ability to speak standard Chinese. The player starts by saying: "Hello. How are you?" into the microphone and receives a score based on how well he or she matches the tones and pronunciation of standard Chinese. The player then develops a town while answering questions that develop pronunciation and listening skills.

The game is designed for Chinese rather than foreign players. Tencent has developed the game because strong accents -- especially those of the interior regions -- disadvantage people when they apply for employment.

Tencent released similar games earlier this year, such as Health Defense Battle, which teaches about the immune system, and another on Tang Dynasty poetry.

NetEase and 37Games have introduced games themed on the preservation of Chinese culture and obedience to traffic rules.

The market for such "functional games" serving practical purposes amounted to 631 million yuan ($96 million) in 2019, up 60% from the previous year, according to Beijing Entbrains Consulting. The Chinese think tank forecast a further market expansion of more than 20% in 2020.

Developers earn relatively little for functional games designed to help people recognize social problems. But the market is growing as developers promote them amid their strained relations with the government.

China has become the world's biggest market for video games. However, concerned about game addiction among young people, the government at one point suspended pre-release screening of new games.

Game companies have resorted to countermeasures such as voluntary age restrictions. The promotion of functional games is part of these efforts.

"We show the social significance (of games) to improve our relations with regulatory authorities," a game developer in Sichuan Province said.

Consumers welcome the trend. Tencent, through a game in its WeChat messaging app that involves walking to and from school in the dark in a mountainous area, has so far collected donations totaling 2.4 million yuan for erecting lights on mountain paths. A 29-year-old woman in Guangzhou, Guangdong Province, who donated to the campaign called the game "readily enjoyable."

In order to fulfill their purpose, public interest-oriented games must be easy for anyone to play.

Chinese game companies have corralled core players by spending huge amounts of money to develop big shooter, role-playing and other games. But they recently have also been trying to expand their customer base through casual games. This trend is expected to advance due in part to China's domestic circumstances.