YANGON -- With the nationwide power supply network far from reaching small localities across Myanmar, projects to set up "mini grids" for villages are gaining traction.

Many parts of Myanmar are still not connected to power grids. One example is a village located an hour and half by car from Mandalay -- the second-largest city in the country. Oxcarts ply the streets, and utility poles are seen sporadically.

But the poles just stand there without any power lines running between them. They were erected to provide electricity to the village, but when that will happen no one knows, says a staffer of a local nonprofit. 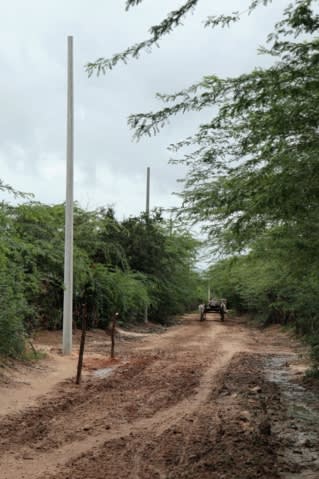 Only 32% of households in Myanmar use electricity from the grid as a main source of lighting, according to the 2014 census. The government pledges to supply power to all households by 2030, but most observers are deeply skeptical and consider the target impossible.

Syncing up with mobile carriers

Therefore, as a makeshift solution, "mini grids" to serve unconnected communities are drawing much attention. In May, conglomerate Yoma Strategic Holdings agreed with a Norwegian government fund to create joint venture Yoma Micro Power. The venture will build small power stations that generate electricity with solar panels and diesel generators. They will store excess power output in batteries.

The venture will begin trial operations at about 10 locations this year in the Sagaing Region in the north. Each site is supposed to supply electricity to a couple of nearby villages, each consisting of 100 to 200 households, and collect payment.

The project will position mobile service companies as core customers, and each service area will have at least one mobile service base station. This business model allows the project operator to secure steady income.

With mobile phones increasingly popular, electricity demand is rising in villages, said Yoma Strategic CEO Melvyn Pun. He expressed confidence in the profitability of the business, noting that solar panels have become inexpensive.

Light up one community at a time

Last year, the company signed a memorandum of understanding with EDF, a French state-owned utility, and the Magway Region government to supply electricity via "mini grids" to 8,000 households -- one of the largest such projects in Southeast Asia.

Parami is working toward securing similar MOUs for projects in other regions as well. It may join with partners from Europe, India and Thailand, depending on the location. The company hopes to expand the business to 1 million households in four years, Tun said.