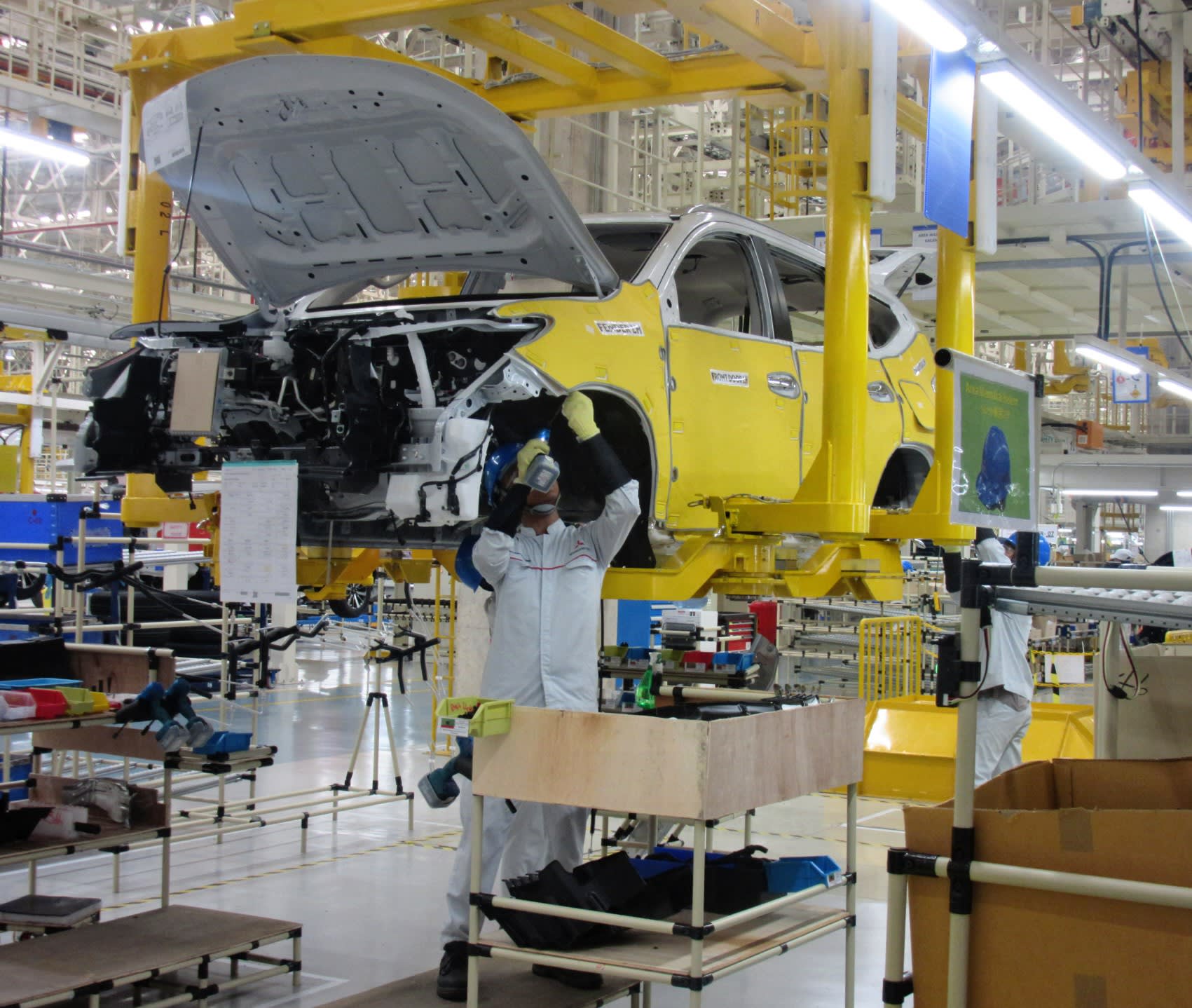 Having joined the Renault-Nissan Motor alliance, Mitsubishi is under pressure to raise efficiency swiftly to make its plants competitive with those of other alliance members. The goal of its Southeast Asia strategy is to rehabilitate slumping operations by taking advantage of synergies between the three production centers in Indonesia, Thai and the Philippines.

Built on an industrial estate in Bekasi, just outside Jakarta, the new plant's footprint is 10 times that of the Tokyo Dome baseball stadium. To enable efficient production of vehicles such as the Pajero Sport, the facility is characterized by the proximity of buildings performing separate processes, such as pressing, welding, coating and assembly.

Mitsubishi has traditionally moved units through the processes suspended on railings attached to the ceiling. At the new factory's assembly building, some of the transfer is done on carts. Varying the number of carts makes it easier to adjust the length of production lines according to the number of vehicles being assembled. The method also helps reduce the necessity for workers to move positions and cuts their workload.

The method was originally devised at Mitsubishi's Okazaki plant in Aichi Prefecture, western Japan, where the company's main production and development functions are concentrated and the core of the domestic operations. The Indonesian plant also uses bar code readers, PCs and tablet devices to ensure the right work steps are followed and parts are managed correctly -- a system it has also taken from Okazaki.

Like much of the equipment, the plant's welding machines were assembled and tested in Japan before being taken to Indonesia. The company took special care to prepare the right machinery for the Bekasi plant, as it performs large numbers of welding processes -- about 2,700 in a Pajero Sport, for example -- and thus can affect production costs significantly.

Workers at the Indonesian plant spent two months training in Okazaki. Only those who pass a subsequent test are allowed to tend to the assembly lines. A further plan is to make selected individuals train other local hires.

If Okazaki can be described as the mother of the Bekasi plant, Mitusbishi's factory in Thailand, from which the structure of the buildings was borrowed, might be its brother. The Indonesian plant's ceiling height, for example, is set higher than Mitsubishi's Japanese plants to allow hot air to escape and provide a more comfortable working environment. The beams in the buildings are located 11 meters from the floor -- 50% higher than in Japan.

After it joined the Renault-Nissan alliance through Nissan's acquisition of a 34% stake last October, Mitsubishi has faced pressure to enhance its production facilities amid competition with Renault and Nissan plants.

In April, Nissan Chairman Carlos Ghosn, who now also serves as chairman of Mitsubishi, inspected both Bekasi and the pant in Thailand, where annual production of 420,000 vehicles makes it one of the biggest in the country run by a Japanese company.

While meeting executives, he acknowledged the scale of the plant but reminded them that its rivals now include Renault and Nissan factories. He also called on them to raise the current utilization rate of 80% to 100%.

Ghosn has started to work out a program to rank plants operated by the three alliance members in terms of aspects such as efficiency. He has also introduced a system to select plants recognized as being more competitive, including their logistical advantages, to take on the manufacture of specific products. This gives Mitsubishi's three Southeast Asian plants a chance to potentially make vehicles for Renault or Nissan -- if the company can prove they are more efficient than approximately 60 other facilities within the alliance.

In addition to boosting the competitiveness of the three plants, Mitsubishi President Osamu Masuko aims to enhance synergy among them by giving each complementary roles.

The main products for the Thai plant, for example, are pickup trucks and sports utility vehicles, while the Indonesian plant will mainly produce a multi-purpose vehicle model that goes into production this coming fall. The company's Philippine plant is focused on the Mirage subcompact, which it started to manufacture in late February.

Masuko said he aims to use the three production centers to expand exports to surrounding countries.

Mitsubishi suffered a consolidated net loss of 198.5 billion yen ($1.74 billion) in the year ended March 2017, affected by the fuel-mileage falsification scandal, after achieving 72.5 billion yen in net profit in the previous year. Its global vehicle sales shrank 12% from a year ago to 920,000 units.

Ghosn has stated he wishes to raise global vehicle sales figures, which have hovered around the 1-million mark in recent years, to 1.25 million in the year ending March 2020 and expanding the operating margin back to above 6%, on a par with levels before the scandal broke.

For Mitsubishi to expand sales and improve profitability, its growth in the Southeast Asian market, which represents 20% of its total global sales, is essential.