Ghosn asks for more factory IT and some bottom-up reforms

TOKYO -- The capital injection Mitsubishi Motors got from Nissan Motor came with a string attached.

As part of the Renault-Nissan alliance, Mitsubishi's factories are expected to become competitive with those of its partners.

The scandal-tainted automaker is racing to do just that, leaning on internet technologies and ideas from its rank and file workers -- all in a bid to restore public trust and impress new Chairman Carlos Ghosn. Mitsubishi's Okazaki plant, which produces SUVs, spreads over a 1 million sq. meter parcel in Aichi Prefecture, central Japan. At the heart of the site sits a production facility. In January, a brand-new computer was installed in its technology center.

The computer is connected to a real-time feedback system designed to immediately report assembly line malfunctions, allowing necessary measures to be promptly taken while the line continues to run.

Cars, as they travel down the line, are inspected at every phase -- welding, painting, assembly -- by sensors. When the system spots a problem, say a missing part, it gives a warning. An inspector checks the problem in person and uses a special tablet to send a report via the internet. The report is immediately routed through a server to plant workers.

In the past, these reports were assembled then emailed out at the end of the day, in some cases sitting in the system until the next day. This sometimes made it difficult to understand where and what kind of problems had occurred.

The new system automatically sends information from the inspector to a computer screen. The message is accompanied by a warning sound. This makes it easier for plant workers to find the vehicle in question and take necessary measures, like rewelding or adding a part.

Analysis of data accumulated on the server could help identify who is working and the times of day, among other variables, when trouble might occur. The automaker hopes that using artificial intelligence to analyze data will enable it to teach employees what possible problems to watch out for and to prevent trouble from developing. 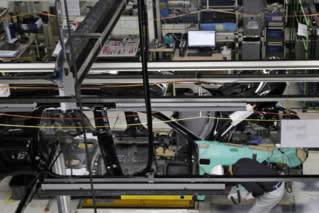 Problems are spotted and shown on computer screens in real time at every step of the production process at Mitsubishi Motors' Okazaki plant in Aichi Prefecture.

There are some 2,000 items on the inspection checklist. Sometimes 400 to 500 problems are reported in a single day. "Ultimately, we hope to reduce the number to zero to achieve nonstop operations," a Mitsubishi representative in charge of the new system said.

The Okazaki plant currently has 24 computers installed to monitor some of the production processes, including welding and pressing. Next month, four more are to be added. The company plans to introduce the same system at its Mizushima plant, in Okayama Prefecture, western Japan, as well as at other facilities.

These new production checks were introduced partly because of Ghosn. After Mitsubishi got into trouble for tampering with fuel economy data, Nissan in October bailed it out by buying a 34% stake and placing the company in the Renault alliance. To boost synergy, Nissan plans to share plants with Mitsubishi.

Nissan has already begun developing a new system to rank plants -- operated by Nissan, France's Renault and Mitsubishi -- by efficiency and other criteria. The ranking will be designed to put the plants in a kind of competition with one another.

When Ghosn took over Nissan, he reorganized the Japanese automaker by closing plants with low productivity. As chairman of Mitsubishi, Ghosn is urging the company and its suppliers to change their mindsets, saying that noncompetitive parts suppliers will lose out on alliance contracts.

Change is not only coming from the top. Plant workers are using their wisdom -- and spare time at work -- to refine factory operations. One new system was invented to save time and space in replacing an emptied auto parts container with a new one. Another invention allows carts containing parts to be automatically sent in. 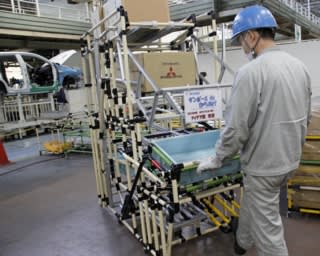 Plant workers' ideas are being adopted to improve operations at the Okazaki plant.

The Mizushima plant has introduced a direct parts supply system by inviting parts suppliers to manufacture within the plant. This "in site" supply system has helped reduce inventories and logistics costs. The fact that the minivehicle jointly developed by Mitsubishi and Nissan is produced at the Mizushima plant rather than at a Nissan factory shows that the plant has been judged competitive.

Though now part of Nissan, many Mitsubishi employees are skeptical about whether their company can really recover. For Mitsubishi to regain trust after a series of scandals -- beginning in the 2000s when it was caught covering up recalls -- it must convince consumers that it really is changing.

The first step is to finish the homework Ghosn assigned as soon as possible.