'Zaibatsu' descendants grapple with pressures hitting much of Japan Inc.

TOKYO -- Through Japan's prewar and postwar economic ups and downs, there has been at least one constant: a strong sense of solidarity among businesses bearing the Mitsubishi name.

Although the original zaibatsu conglomerate was broken up during the U.S. Occupation, its disparate parts have continued to support one another, one way or another. Symbolizing this spirit of unity is the Mitsubishi Kinyokai, or Friday Club, which brings together the heads of 28 core group companies -- from manufacturers to financial institutions -- for a monthly meeting.

Cross-shareholding arrangements have also held the group together. But now, ties that once seemed unbreakable appear to be fraying.

As one executive put it, "Times have changed." And the iconic group's struggles to adapt may be representative of the difficult adjustments facing many Japanese companies these days.

A major factor is the growing presence of overseas investors.

Foreign shareholders now own about 32% of trading house Mitsubishi Corp., 29% of engineering giant Mitsubishi Heavy Industries and 36% of Bank of Tokyo-Mitsubishi UFJ. The three companies have long cross-held one another's shares. But international investors frown upon this practice, arguing it undermines management efficiency. And simply ignoring about a third of your stakeholders is not an option. Last fiscal year, Mitsubishi Corp. and BTMU sold some of their shares in each other.

"There were times, such as Japan's high-flying days half a century ago, that Mitsubishi companies needed one another," the executive said. "Today, however, each one works hard independently in its industrial sector."

There are plenty of signs of loosening cohesion.

Even the Friday Club is not what it used to be. Executives used to discuss critical management issues, such as the rehabilitation of a troubled group company or intragroup mergers. At November's gathering, though, professional golfer Hiromi Kobayashi stopped by to share some tips. "The Friday Club is becoming more like a casual get-together, avoiding serious issues as much as possible and focusing on matters like philanthropy," a source close to the club said.

A rift over board appointments is another example.

On Aug. 25, Mitsubishi UFJ Trust and Banking revealed that it had opposed Mitsubishi Motors' move to install Shunichi Miyanaga, president of Mitsubishi Heavy, and Ken Kobayashi, chairman of Mitsubishi Corp., as outside directors. The trust bank has taken this stand at the automaker's shareholders meetings two years in a row. The bank's opposition to the appointments is tied in with Japan's stewardship code, enacted in 2014.

Trust banks manage money for pension funds and various clients, investing in stocks and other instruments. They are supposed to exercise voting rights at target companies' shareholders meetings on behalf of the clients. The stewardship code also obliges them to fulfill their responsibility to clients by improving the corporate value of the companies in which they invest.

More than 200 institutional investors, Mitsubishi UFJ Trust among them, have formally accepted the code.

Setting voting criteria right in line with the code, Mitsubishi UFJ Trust makes it a rule to oppose nominations of outside directors from "specified related companies." This includes a company's main business partners -- thus, the appointments of Miyanaga and Kobayashi clash with the bank's policy.

Some Mitsubishi group officials seem to think the trust bank is missing the big picture. 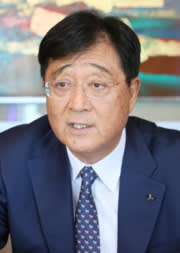 Mitsubishi Motors' CEO Osamu Masuko said Miyanaga and Kobayashi "are not only key leaders of the Mitsubishi group but are well-acquainted with the auto industry." Noting the automaker is seeing a sharp recovery in earnings, thanks in part to the Southeast Asian foothold Mitsubishi Corp. and other group companies carved out years ago, Masuko insisted the appointments are appropriate.

But many market players hold the top three Mitsubishi companies -- Mitsubishi Heavy, Mitsubishi Corp. and BTMU -- responsible for overlooking the automaker's repeated misdeeds, such as the falsification of fuel economy data. Scandals ultimately forced the Mitsubishi Motors to slide under Nissan Motor's umbrella.

Masuko himself has conceded that the company "also needs to focus on diversity in naming outside directors."

The automaker has recently become a lot more diverse at the rank-and-file level. Since the Nissan rescue in late 2016, more than 200 former employees of Sony and other Japanese and international companies have come on board -- on top of workers loaned from Nissan and Mitsubishi group members.

BTMU, too, is going its own way.

BTMU is "no longer the bank for Mitsubishi companies," a senior official of one of the group's big three said with resignation. When it came to Mitsubishi Motors, the bank's parent, Mitsubishi UFJ Financial Group, wanted a drastic and concrete solution that would make the automaker a self-sustaining business -- be it a reorganization, merger or spinoff. It did not want to resort to a bailout, like it might have in the past.

This stance pushed Mitsubishi Motors to turn to Nissan for help.

When Mitsubishi Motors defect cover-ups came to light in 2000 and 2004, Bank of Tokyo-Mitsubishi, the precursor of BTMU, stepped up to provide financial assistance alongside Mitsubishi Heavy, Mitsubishi Corp. and other members of the corporate family.

Explaining the decision not to help out this time, an MUFG executive said: "Now that MUFG's overseas business has expanded and the company has become a corporation with a committee governance structure, we can no longer engage in opaque decision-making within the fold of fellow companies." In 2008, MUFG forged an equity tie-up with Morgan Stanley of the U.S., prompting the bank to think in a more global context.

Hirano, who took the reins of MUFG in 2013, embodies that new mindset.

As a young employee of what was then Mitsubishi Bank, Hirano was seconded to none other than Morgan Stanley. He never belonged to Mitsubishi Bank's planning department -- the traditional steppingstone to the presidency -- and if the bank had survived he might never have reached the top.

Hirano's U.S. experience made him a logical choice to lead the institution in the age of globalization, but he does not seem to have much of a "Mitsubishi first" mentality.

Consider BTMU's branch consolidation plans, as it strives to ride out the period of negative interest rates. It appears to be giving no special treatment to locations with significance in Mitsubishi lore. In 2015 it closed an office in Kochi Prefecture, the birthplace of Yataro Iwasaki, the founder of the Mitsubishi conglomerate. Last year, Mitsubishi UFJ Trust and Banking had its Takamatsu branch absorb the operations of the Kochi branch.

BTMU has not ruled out closing a branch in Nagasaki Prefecture, where Mitsubishi Heavy Industries started out as a shipbuilder.

The shipbuilding business, as it happens, is seeing the end of another long-established Mitsubishi practice: placing project orders within the group by default.

"We can never pay such an amount," Nippon Yusen, also known as NYK Line, a Mitsubishi group shipping company, said in rejecting a written cost estimate from Mitsubishi Heavy Industries in June. The estimate was for the construction of a successor to the Asuka II -- Japan's biggest luxury cruise liner. It came in about 20% higher than an earlier projection of some 50 billion yen ($440 million). NYK Line has put off construction of a successor to this cruise ship, the Asuka II.

Mitsubishi Heavy had built the first two Asukas, and it was considered a given that it would win the order for the third. "I think it's best to order from Mitsubishi Heavy," NYK Line's president had once said. But the June estimate changed the shipping company's attitude.

Why did the price rise so dramatically? Mitsubishi Heavy is licking its wounds after racking up 254 billion yen in extraordinary losses due to delayed deliveries of two large luxury liners for a German client. It has also been forced to repeatedly delay its Mitsubishi Regional Jet -- Japan's first homegrown commercial passenger plane in decades.

As a result, the company saw its stock plunge about 50% in the span of two and a half years. Under the circumstances, the head office refused to adhere to the lower initial estimate, despite the construction department's pleas that it would build the new ship using expertise gleaned from the German projects.

NYK Line itself posted a 265.7 billion yen loss for fiscal 2016. With its stock price limping along, it is pursuing its own structural reforms. Reality trumps any feelings of fellowship it might have with Mitsubishi: It cannot afford to simply accept the higher estimate.

"I think the postponement of the plan to build the successor to the Asuka II, a vessel symbolizing Japan, deals a heavy blow to the Mitsubishi group," a Mitsubishi Heavy official lamented.

The change in order policy is not confined to the shipping sector. Mitsubishi Corp., Chubu Electric Power and Nippon Paper Industries in 2016 launched the Suzukawa Energy Center -- a power plant through which Chubu Electric aims to supply the Tokyo metropolitan area. The plant uses boilers from IHI, not Mitsubishi Heavy.

Two of the big three, Mitsubishi Corp. and Mitsubishi Heavy, are increasingly doing business with partners besides each other.

A Mitsubishi group source explained this shift is necessary to compete against the likes of General Electric, Siemens and increasingly powerful Chinese players.

"Mitsubishi Heavy chooses to partner with trading companies that are strong in the country it is entering, while Mitsubishi Corp. chooses cost-competitive partners that can build high-performing facilities," the source said. Mitsubishi Corp.'s relationship with Fast Retailing -- the operator of casualwear chain Uniqlo -- is another example of the willingness to reach outside the group. The trading house is helping Fast Retailing expand abroad through joint ventures in Thailand, Indonesia and Russia. Mitsubishi has dispatched at least six officials to the ventures, and has also sent one to serve as vice president of GU, another Fast Retailing subsidiary.

All big general trading houses continually review their portfolios and decide where to focus their investments. Mitsubishi Corp.'s medium-term management plan prioritizes food materials, gas and electricity, and automobiles, among others, as future sources of revenue. It sustained its first-ever group net loss two years ago, due to a tumble in resource prices, and today it "cannot afford to put an ailing group company under its wing to rescue it," a senior official said.

Still, despite the obvious pressures facing Mitsubishi companies, some insiders seem uneasy about what is being sacrificed.

Just as its logo has three diamonds, the group has three principles, laid out by its fourth president, Koyata Iwasaki. They are: shoki hoko (corporate social responsibility), shoji komei (integrity and fairness) and ritsuan boeki (promoting global understanding through business). Put simply, the group's ultimate purpose is to serve Japanese society with a global perspective.

More than a few Mitsubishi company chiefs say putting aside national service in pursuit of short-term profits runs counter to the old group creed. But given how times have changed, what would Iwasaki expect the companies to do?