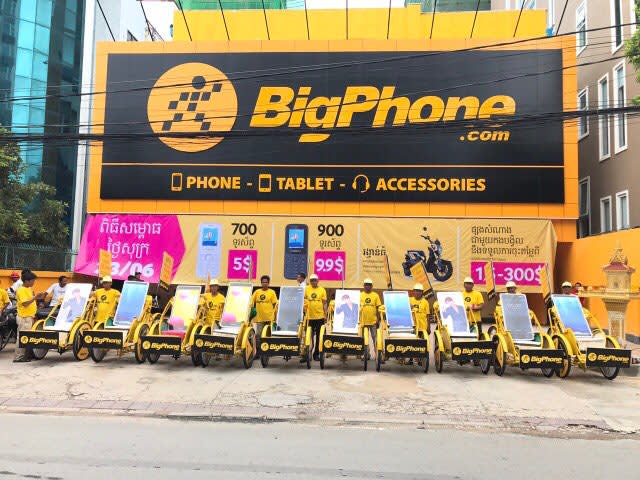 The new outlet in Phnom Penh carries the distinctive branding of MWG's The Gioi Di Dong chain. Samsung tablets and smartphones make up the majority of products on offer, with Camfone, Huawei, LG, and Oppo units also in stock. Apple and Nokia products will arrive in July.

The first 400 sq. meter store is aiming for monthly revenue of $100,000 from its first investment in the neighboring kingdom, and the next move will be decided after three months. In business for 13 years, and listed in Ho Chi Minh City, MWG is Vietnam's market leader with 26,000 employees and 40% of the market -- ahead of rivals FPT Group, Vien Thong A, and Viettel Group.

Established in 2004, the company has some 1,000 The Gioi Di Dong outlets selling digital mobile devices. In addition, there are 300 Dien May Xanh outlets retailing consumer electronics. There is also the Bach Hoa Xanh supermarket chain in Ho Chi Minh City, with 95 outlets planned for the end of the year along with an online platform.

MWG is targeting annual revenue of 230 trillion dong ($10 billion) in five years, and 63 trillion dong this year. In the past three years, the company has seen growth of over 60% in revenue and over 45% in net profit.

Vietnam has a population of over 93 million with some 130 million mobile subscriptions. The number of smartphone users is expected to exceed 28 million this year. The softening market has led the FPT Group to seek a buyer for its mobile device retail chain.

However, a 2016 study of cellular and internet usage in Cambodia by the Asia Foundation suggested the market may already be saturated. Over 96% of those surveyed owned their own phone, 13% had more than one, and 48% already had a smartphone.

The company hopes customers will be enticed by the BigPhone consumer experience and properly supported distribution of genuine products.