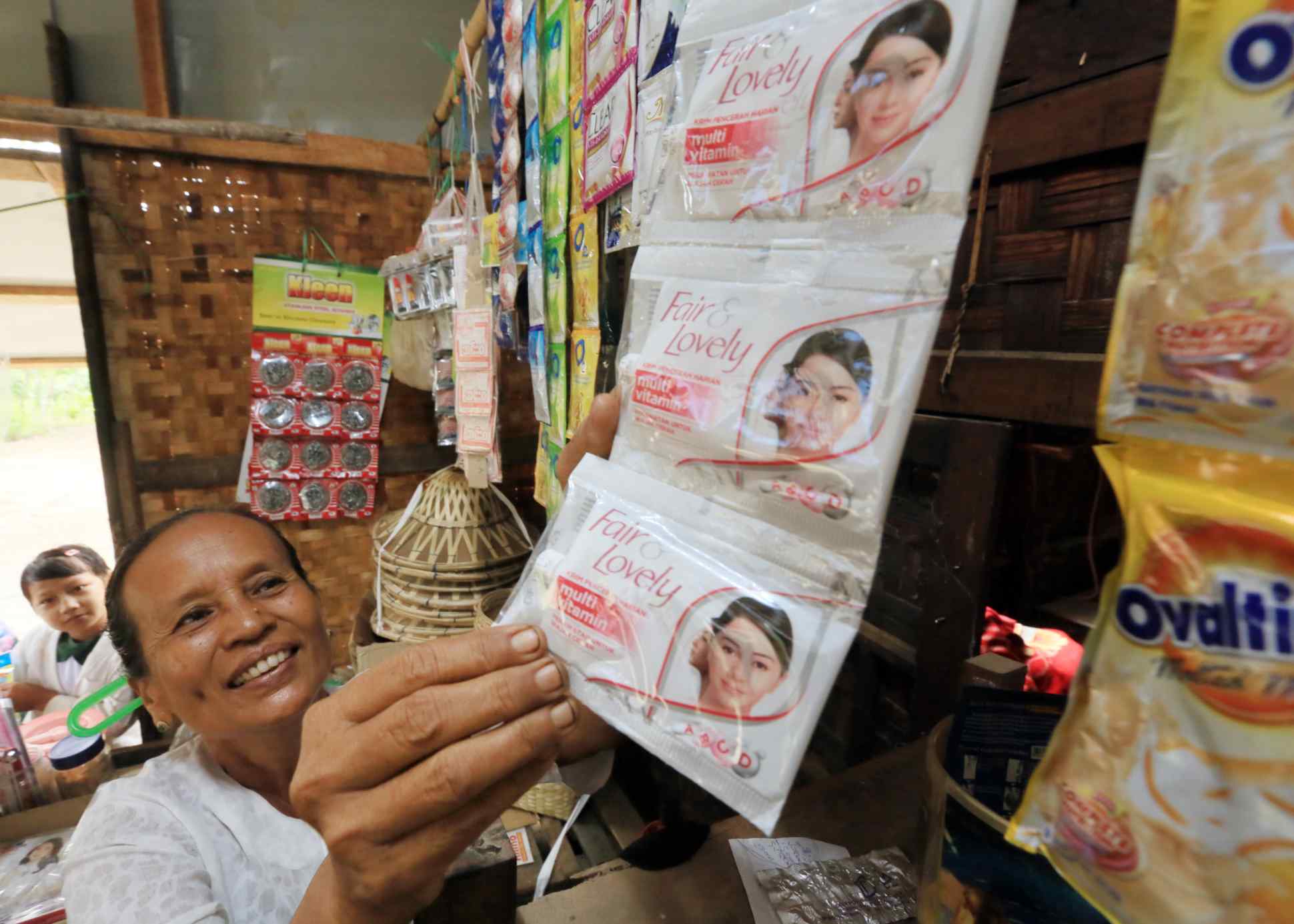 TOKYO/YANGON/MUMBAI -- At a small shop tucked into a residential neighborhood of Yangon, one peculiar set of items has emerged as a hit seller among the snacks and household staples on offer: single-use pouches of Unilever shampoo, which dangle from the store's walls and ceiling.

Many in Myanmar still consider bottled shampoo of the sort sold in advanced nations as out of their price range. Naw Htoo, a 21-year-old woman who works as a housekeeper, said: "My friends and I use only small pouches of shampoo. It is quite economical for us." A 10-milliliter portion from Unilever, available even at the roadside stands that dot the country, costs a mere 100 kyat (7 cents).

The Anglo-Dutch consumer goods conglomerate aims to widen its Asian footprint with marketing strategies tailored to low- and middle-class buyers in developing nations. Unilever Myanmar announced in May a joint venture with Europe & Asia Commercial, which makes goods such as detergents and shampoos in the country. The pair will merge their personal care businesses, which together are seen generating more than 100 million euros ($117 million) in annual revenue. By 2020, the companies hope to expand that figure to 300 million euros. 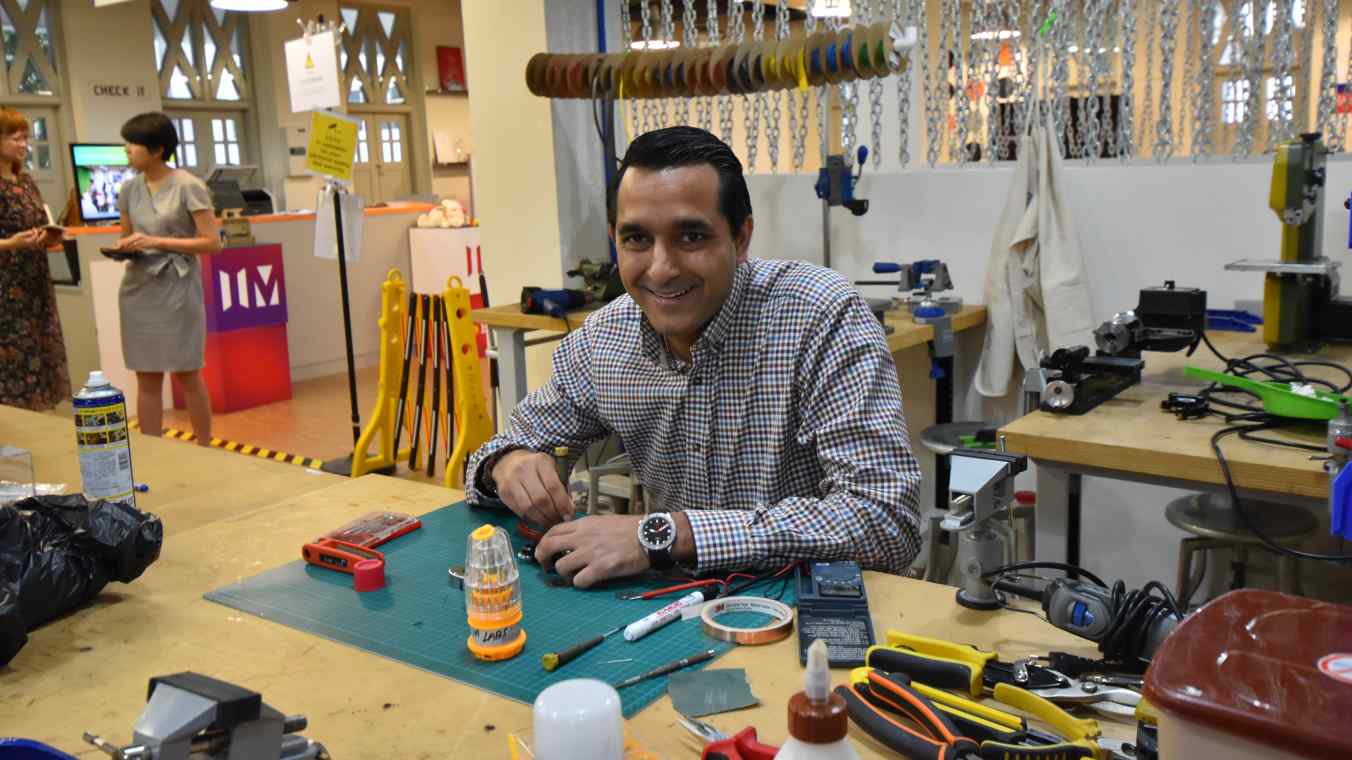 This deal marks Unilever's full-scale return to Myanmar following 52 years of near absence after the company's previous facilities there were nationalized by the country's then-socialist government in 1965. Society has changed drastically in that time, and consumer habits continue to shift rapidly: More women are abandoning traditional dress for Western clothing such as skirts and jeans, for example.

Asia and Africa accounted for 31% of Unilever's global sales in 2007. By 2016, that share had grown to 43%, thanks largely to canny marketing strategies targeting those markets. Small, low-cost portions of detergents and seasonings have gained a following among the lower classes. The company also gave vendors of all sizes detailed instruction in how best to push its products, even training women in farm communities as local sales representatives.

The company also engages with promising startups in Asia, such as by teaming with Singapore-based social enterprise Next Billion to promote its soap and toothpaste brands in rural Bangladesh. Under the so-called Mobile Movies program, a network of female representatives operated pop-up cinemas screening educational videos on hygiene alongside feature entertainment, and they distributed samples of Unilever's products, helping raise brand recognition in areas that are ordinarily difficult to reach.

Next Billion is one of the more than 40 startups based in Level3, a co-working space Unilever opened in February below its Singapore offices. Occupants represent a wide range of fields, from health care to advertising technology.

"It allows Unilever to be connected with disruptive technologies and change-makers," said Barbara Guerpillon, who heads Level3. Startups benefit from Unilever's global network and broad expertise, which offer strong opportunities for piloting new ideas and quickly bringing businesses up to scale.

Unilever also looks to tighten its hold on markets where the company already dominates, such as India and Indonesia. Hindustan Unilever, the group's Indian unit and that country's leading consumer goods maker, in 2016 paid 3.3 billion rupees ($51.4 million at current rates) for Indulekha, a cosmetics brand rooted in the Indian medical tradition of ayurveda. These offerings are pricier than many of the company's other lines, with a 100ml bottle of hair oil selling for more than 400 rupees, and are part of Unilever's attempt to cultivate a higher-end brand image that will appeal to India's growing upper class.

The ayurveda field presents an opportunity for the company to enhance its premium lineup, says Sanjiv Mehta, CEO of Hindustan Unilever. The group has introduced a host of other higher-end goods as well, including water-saving laundry detergent and dish soap specially designed to deal with the oil and powerful aromas of Indian cuisine. Unilever Indonesia's products are displayed in a supermarket in Jakarta. (Photo by Keiichiro Asahara)

The Asian push seems to be paying off for both Unilever proper and its local affiliates. Unilever Indonesia, in which the conglomerate holds an 85% stake, logged return on equity of 134% for 2016 and paid out 99.9% of its earnings to shareholders in the form of dividends. Hindustan Unilever, which is 51% owned by the parent, pays out more than 80% of its earnings.

The parent reinvests money earned by these local units in Asian production and product development. Asia offers both rapid economic growth and high returns on investment, Sigismondi said, and Unilever intends to invest there continuously.

But growing competition from companies such as American consumer goods heavyweight Procter & Gamble and Japanese firms including Unicharm and Ajinomoto could disrupt this happy cycle. P&G imitates Unilever's small-merchant-based expansion strategy in the Philippines by offering training to operators of so-called sari-sari stores -- small neighborhood shops selling a variety of daily goods and pantry staples.

Short-term concerns also could hinder the long-term thinking that has served Unilever so well in Asia. U.S. food producer Kraft Heinz in February attempted to take over the company in a $143 billion deal, and could try to do so again, putting pressure on Unilever to pay greater attention to its shareholders and keeping near-term earnings strong.

Nikkei staff writers Tomomi Kikuchi in Singapore and Wataru Suzuki in Jakarta contributed to this report.