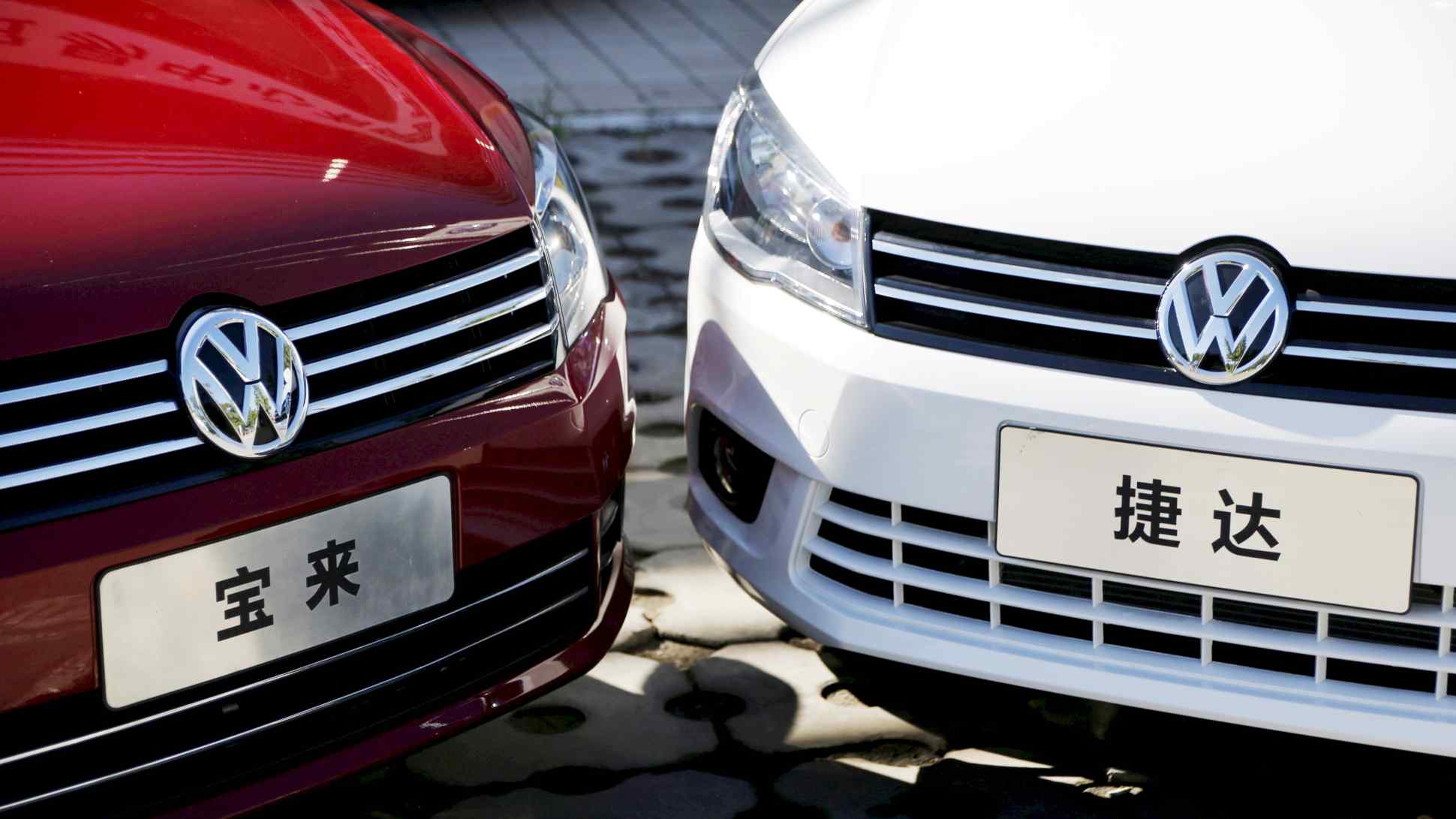 Volkswagen is on track to sell 11 million vehicles this year, despite a brand tarnished by scandal. But the automaker faces some major challenges over the long haul.   © Reuters
Multinationals in Asia

BEIJING/FRANKFURT, Germany -- If Volkswagen's emissions cheating scandal in 2015 was akin to hitting a wall, China has proved to be a giant air bag.

The German automaker sold 1.99 million cars in China in the first half of 2018, up 9% from the same period a year earlier. In 2017, VW moved 4.18 million vehicles there, double the figure seven years earlier.

The strong sales have cushioned the financial blows and damage to the brand from the scandal over VW's use of software to skirt diesel emissions rules. The company has forked out 27 billion euros ($31.4 billion) to settle criminal charges and civil suits, as well as buy back cars and compensate customers.

Yet there are signs that VW may not be able to count on China forever. At the same time, it remains an also-ran in another increasingly important Asian market -- fast-growing India -- where it sells a fraction of the number of cars the Suzuki Motor group does.

VW risks losing its status as the world's largest carmaker if it fails to cash in on opportunities in these countries.

Despite its sullied name and scandal-related costs, VW posted stellar results for the first six months of this year. It set revenue and operating profit records, excluding special items, having sold 5.51 million vehicles globally -- up 7% from the same period last year.

VW is on track to sell a total of 11 million vehicles this year. "After diesel, we are much stronger than before diesel," CEO Herbert Diess said of the scandal.

Investors at least agree the company is headed in the right direction. VW stock has been gradually rising since it tumbled after the revelations. While the share price is still 25.4% lower than it was at the end of 2014, Toyota Motor stock is down 10% since then. VW lags behind Germany's DAX index, but Toyota is also underperforming. The auto group's persistent strength is partly attributable to the high profitability of its luxury brands, Audi and Porsche. The two marques together account for only 20% of the group's global unit sales but contribute about half its overall operating profit.

But China has been essential to the company's resilience -- a point Diess acknowledged when he spoke at the Beijing International Automotive Exhibition in April. "China plays a prominent role across all group brands," he said.

VW has established itself as the best-selling automaker in China with a market share of 17% in 2017. When it comes to passenger cars alone, VW sells more in China than in Europe. A VW concept car at the Auto China 2018 show in Beijing in April: The German automaker sold 4.18 million vehicles in the country last year.   © Reuters

In 1985, VW set up a joint venture with SAIC Motor, taking on the role of guide for a Chinese auto industry that was still in its embryonic stages. The company's move into Shanghai coincided with future Chinese President Jiang Zemin's arrival in the city, where he would hold key Communist Party posts.

Jiang had once worked for state-owned First Automobile Works, now FAW Group, the country's oldest carmaker, and VW cultivated ties with his circle, known as the "Shanghai clique." The German company established another joint venture with FAW in 1991. In the years after Jiang left office, VW continued to build up its business in China. So although it suffered a dip in sales in 2015 due to the emissions scandal, the company quickly shook off the ill effects and kept growing.

Warming relations between China and Germany and new SUVs have only helped VW's cause. But is the company's strong performance obscuring trouble ahead?

Chinese President Xi Jinping has amassed immense power, yet VW does not appear to have established many connections with his close aides.

A spat over Audi in 2016 seemed to underscore VW's waning political clout. Audi struck a sales agreement with SAIC, infuriating FAW, which feared losing customers to a domestic rival. FAW dealerships launched an Audi boycott in protest, prompting VW to shelve the plan.

There have been more obvious signs, too. Domestic player Zhejiang Geely Holding Group, which sells the Geely brand, is emerging as a formidable competitor. Its chairman and chief executive, Li Shufu, built a personal relationship with Xi when the future president was the top party official in Zhejiang Province. The two men are rumored to be related by marriage as well, and Xi reportedly played a key role in Geely's decision to purchase Volvo Cars.

Geely sold 766,630 units groupwide in the January-June period, up 44% on the year. And the 2018 National People's Congress left little doubt over Geely's rising status. The luxury cars that led the buses carrying representatives were Geelys, not Audis as they had been in the past.

Geely is replacing Audi as the main car supplier for China's central and local governments. An analyst at a foreign research company said "VW is failing to keep pace with political changes in China."

Not only does VW have to worry about its brands being replaced, but it also must contend with China's drive to switch from gasoline to electric vehicles.

Next year, the government will demand that "new energy vehicles" account for at least 10% of automakers' sales. This includes all-electric and plug-in hybrid cars, plus hydrogen fuel cell vehicles. 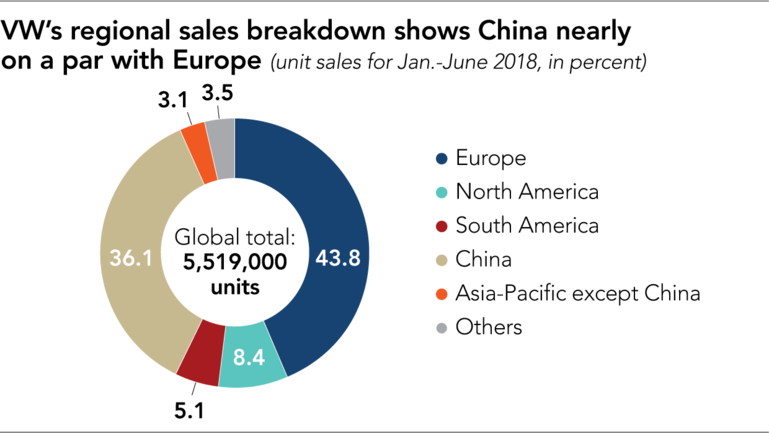 In 2020, the mandatory ratio is to be raised to 12%. Manufacturers that fail to achieve the targets will have to buy transferable credits from rivals that have made and sold more new energy vehicles than required.

China wants to raise the share of the greener vehicles in overall new car sales to 20% by 2025. In the future, it intends to consider an outright ban on production of cars with gasoline engines.

VW is playing catch-up in the electric car business and is under pressure to accelerate development, especially now that the emissions scandal has prompted many European drivers to turn away from diesel.

Diess spoke of the importance of electric cars in a recent shareholders meeting. "E-mobility is coming," he said. "It's the engine of the future. And Volkswagen will be at the forefront of this work as the automaker that takes the electric car out of its niche and introduces it to the mass market."

That is no small pledge for a company that does not even announce its electric vehicle sales figures. Though it offers plug-in versions of some models, such as the Golf, it has lagged behind rivals like Nissan Motor, which produces the exclusively electric Leaf.

In the past, VW may have felt little motivation since its traditional gasoline and diesel engine technologies were so competitive.

Now it plans to roll out more than 50 new electric models by 2025, and sell 3 million units of them annually. To get there, it intends to spend 34 billion euros on new technologies over the five years through 2022, mainly related to electrics. Of that figure, 15 billion euros are to be invested in China, where it has barely started selling electric cars but wants to be moving 1.5 million of them by 2025. 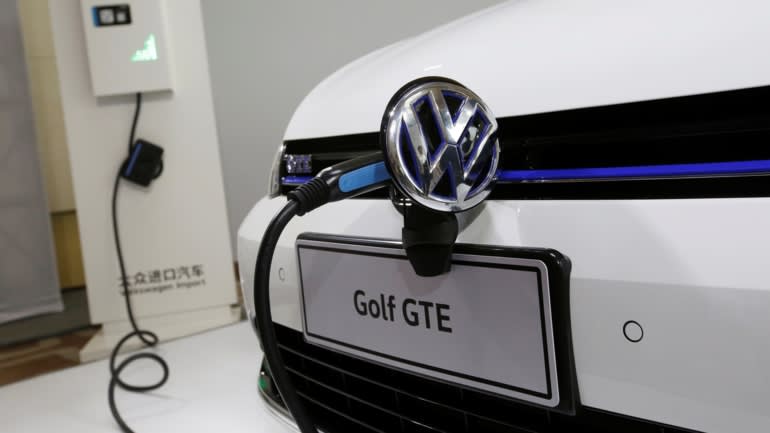 VW's electric Golf is displayed prior to the Auto Guangzhou show in China last November. The automaker aims to roll out more than 50 new electric models by 2025.   © Reuters

Rivals are not aiming quite so high. Toyota Motor's electric vehicle sales target, including fuel cell cars, for 2030 is over 1 million units. Ford Motor plans to invest $11 billion in electric vehicle research and development by 2022.

As if VW did not have its hands full shoring up its position in China and developing electrics, it is also hard-pressed to expand in India.

The country overtook Germany as the fourth-largest auto market last year, with sales of 4.01 million units. It is projected to zip past Japan into third place in 2020. A failure to establish a solid presence in India would put VW at a disadvantage versus global rivals.

It has tried to gain a foothold.

Back in 2009, VW struck a partnership deal with Suzuki Motor, the No. 1 player in India. The plan was to develop compact cars together, but the two companies did not see eye to eye and dissolved the tie-up in 2015.

In March 2017, VW and India's Tata Motors announced a memorandum of understanding for joint development of new cars for the Indian market. Less than six months later, the companies called off the plans, saying they had "concluded that at present, neither the technical nor the economic synergies are achievable to the extent desired by both parties."

VW now entrusts Czech group member Skoda Auto with the development of low-priced vehicles for India. VW plans to launch a new compact in the South Asian country as early as 2020, while bringing 10 electric models to the market by 2025. This project, code named "India 2.0," is aimed at pushing up VW's market share to 5% by 2025. Still, VW will have to contend with a well-entrenched Suzuki along with increasingly competitive companies like Tata. The Suzuki group sold 1.64 million vehicles in India in the fiscal year through March, while the VW group managed only 62,716.

On the whole, despite its current brisk earnings, there are questions about VW's underlying profitability as well.

Among major global carmakers, VW ranks fifth by profit per vehicle, according to a list compiled by Nikkei using earnings for fiscal 2017 and data from QUICK-FactSet. It is no surprise that Daimler and BMW are high on the list, since they focus on expensive luxury cars. Yet VW's profit per car is about 30% lower than Toyota's, which has a similar product portfolio.

On top of the emissions scandal, a growing investment burden appears to be eroding VW's profit-generating capability. As automakers seek the upper hand in the electric era, the company's strategies for China and India are taking on make-or-break importance.